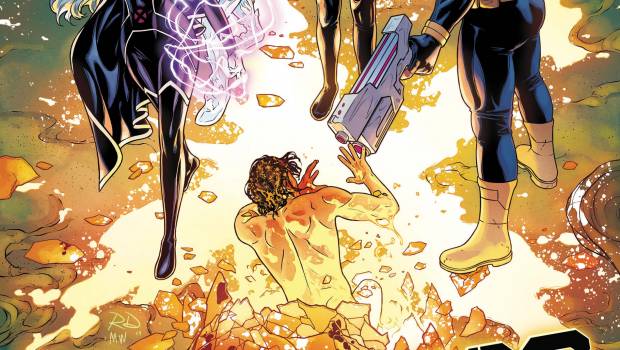 Summary: Hickman’s run has been entirely about change and a new status quo, but some writers seem hellbent on writing characters like they’ve been written for years.

Background:. Shinobi Shaw is reborn and Sebastian Shaw definitely was not one to mourn.

Summary: Sebastian Shaw walks through Krakoa and winds up at Arbor Magna (AKA the home of the five and where mutants are resurrected.) After seeing that Pyro (the original Australian one) has been brought back, a man bursts from an egg. It’s his son, Shinobi Shaw. Per Sebastian’s request, he has no memory of how he died.

After getting Shinobi somewhat reacquainted with what’s been going on, Sebastian takes his son Manhattan. Departing from the Krakoan gates, they are blocked by two humans who are I guess, fans of mutants. They won’t move though, so Sebastian pretty much kicks the bejeezus out of them and tosses them away. After a lot of back and forth of weird father son bonding, the issue ends with Sebastian blaming Shinobi’s death on Emma and Kate.

Final thoughts: This whole run on this book has been very schizophrenic. We started off with Kitty not being able to walk through the gates, so she decides to become a pirate and police the shipments of Krakoan drugs. That and she starts acting like a completely different character than what we’ve ever seen from her before. The name change never bothered me, people change their names all the time in comics. Then Sebastian Shaw regains his title as Black King. After this issue, Kate is eventually murdered by Sebastian and now the pirate angle is pretty much out the window. Now they are trying in vain to get Kitty back to life and Emma is mad at Sebastian.

But enough about all that. Let’s focus on this particular issue. There is a moment in the book, just one brief panel, where Sebastian actually lets his guard down and seems to actually care that his son has just been reborn. That moment is fleeting however, and he steels himself back up. If we saw more of those moments from him, this whole story would have been that much better. I want to see Sebastian struggling with his role as Black King and as a father. I want to see him reflect on what his lust for power, control, and money has brought him. It’s all very one note. As I’ve said in other X reviews, Hickman’s run has been entirely about change and a new status quo, but some writers seem hellbent on writing characters like they’ve been written for years. Give me something new.

Kitty doesn’t even appear in this issue, which in itself isn’t terrible. We’ve spent two issues with her, but the plan that Sebastian is forming doesn’t nearly engage me as much as the Kate storyline. Give me more Kitty and less evil men who want the world the way it used to be.