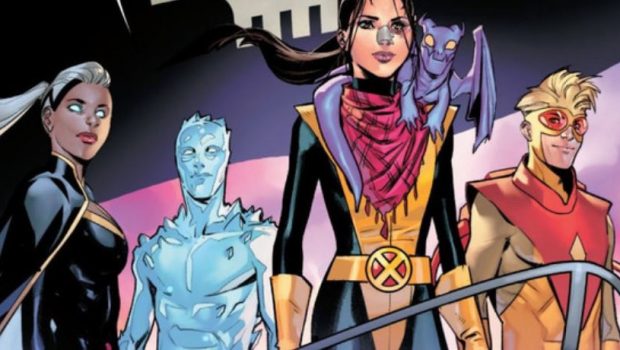 Summary: Duggan and Lolli give us the first non-Hickman-helmed X-book of this new era. In an interesting turn, the end-product is a rollicking fun pirate adventure to rescue oppressed mutants around the world led by fan favorite X-Men veteran: Kitty Pryde.

Gerry Duggan really has fun with this issue and the status quo established by Jonathan Hickman, the newly appointed “Head of X” (jokingly pronounced head of ten according to his Twitter).

Duggan showcases his talent for comedic timing early in the issue, particularly with the two opening bits. The issue opens with Storm and Nightcrawler explaining the new state of affairs and the mechanics of mutant haven Krakoa to a group of young mutants and Kate Pryde (her new preferred name – I know, it sounds strange). When it’s Kate’s turn to go through the portal, she’s emphatically denied by Krakoa. It’s a two page sequence, but the setup and punchline are perfectly timed for comedic effect, punctuated by Kate’s dismayed reaction to slamming into the solid portal. This opening leads into a journal of Kate’s first few days at sea as she essentially becomes a pirate, stealing a boat to find her own way to Krakoa. Each entry in the journal is hilarious in its own right, but Kate confidently declaring “I’m the captain now” on Day Two is sure to elicit a chuckle or two. Comedic timing is a really tough thing to pull off in the comic book medium, and Duggan nails it excellently.

The mystery aspect of the comic comes from why exactly Kate is being denied access to Krakoa, with the immediate assumption being that she is not actually a mutant. Duggan doesn’t dwell on this idea for very long, but it’s always in the back of the reader’s head as they go through the issue. Color me very interested to see how that development plays out in the coming months.

Artist Matteo Lolli has a lot to do with the feel of this issue. Duggan’s comedic bits don’t work quite as well as they do without Lolli’s panel layouts and the expressions he’s able to draw on the characters’ faces. In the aforementioned sequence when Kate is denied access to Krakoa, the entire thing is enhanced by the respective expressions of Kate, Nightcrawler and Storm. Additionally, the understated panel layouts work well to pace the reader’s eye and help with the timing of the beats.

Lolli also succeeds in his rendering of the action scenes in the issue. He effectively shows off Kate’s ridiculous power set in ways I’m not sure I’ve seen before. Kate confidently shifts across the battlefield late in the issue, changing her intangibility levels at will as bullets, swords and even a tank passes right through her. Lolli gives us a horrifyingly creative panel in which Kate gets her hands on a gun and chooses to make it intangible, place it inside the legs of two soldiers, and then let it become tangible again, joining the two soldiers together. The action is complex, yet still really easy to follow, which is a testament to the art team. Lolli’s art also plays a huge role in conveying Kate’s transformation from the innocent, doe-eyed teenage recruit we met in 1980 into the seasoned, dangerous and confident captain of the Marauders we know now while making it still feel like the Kitty Pryde we know and love.

If I have one criticism, there are two pages which are meant to show off the grandeur of Krakoa and Kate’s new boat that fall a bit flat. Both pages are lacking in detail and don’t pack enough punch as the framing of the page implies they should. It’s a minor complaint in an otherwise wonderful issue.

At the heart of this story is comedy, adventure, and a little bit of mystery. It is a welcome reprieve from the heady uneasiness of HoX/PoX. Duggan delivers a fun, interesting issue and assembles a great group of characters to embark on a totally unique premise. Lolli does a fantastic job with both expression and action in the issue. It all portends great things for the future of the Dawn of X and Marvel’s reinvigoration of the X-Men publishing line.