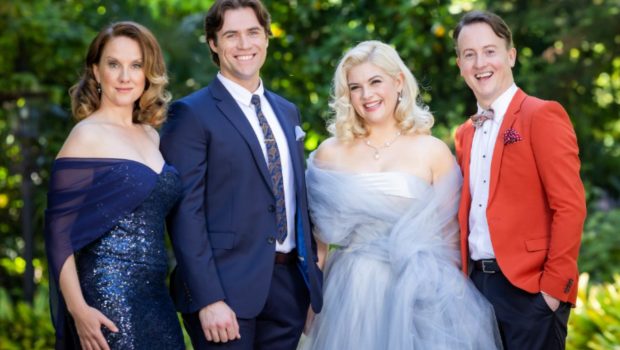 With music/lyrics by John Foreman (Aussie Pops Orchestra, Carols By Candlelight) and Anthony Costanzo (Life’s A Circus, Cross Roads) and featuring an additional song by Kate Miller-Heidke (Muriel’s Wedding), MIDNIGHT is a magical romantic comedy that will delight audiences young and old.

Debuting just in time for the holiday season and loosely inspired by the Cinderella story, this enchanting new tale features Ella, a feisty, funny and passionate young heroine who doesn’t want or need a so-called Prince Charming. The Prince, enchanted by this alluring stranger, suddenly finds himself in uncharted territory and quickly learns that Ella is like no other. Can he prove his worth? Can she ignite his desire for change? Can all be achieved before the magical stroke of MIDNIGHT?

The creative team for this reimagined enchanting tale includes Direction/Book by Dean Murphy (Charlie & Boots, The Divorce) and Pip Mushin (Resident: Book of Mormon, Fiddler on the Roof) with Choreography by Kelly Aykers (So You Think You Can Dance, The Wizard of Oz, Barnum) rounding out this magical offering.

“This is a major new large-scale musical and we are thrilled to be launching this production at the Comedy Theatre in Melbourne. After six years of development, we can’t wait to see what audiences make of this feisty and original take on the classic tale and to bring the story to a whole new generation in a fresh and exciting way,” said Producer Spencer McLaren.

“Whilst we still have some of the beloved fairytale characters there are many new surprises that we know will delight audiences. MIDNIGHT has many Broadway-style showstoppers that people will be singing for years to come and a world-class cast including Lucy Durack as Ms Madrina, Verity Hunt-Ballard as Madame Bellington, Thomas McGuane as the Prince and Matt Lee as his trusted aide Andre. The coveted role of Ella is still being cast with a nation-wide search underway,” he added.

“The inspiration for MIDNIGHT is borne of the desire to create a fully formed, funny, complex heroine for a new generation and to create the definitive musical version of this magical, evergreen tale,” explained Co-Director Dean Murphy.

“The Cinderella story has been retold for hundreds of years with the most widely known version being written in 1950 and reflecting the sensibilities of that era. So, a number of our team with young children felt it was time the world of Cinderella was freshly revisited to explore how this intriguing girl became an icon, but told through a new, empowering story that sees this force-of-nature fight for great change whilst still embracing the love, support and magic from those around her,” he added.

Further casting announcements will be made in early 2023.