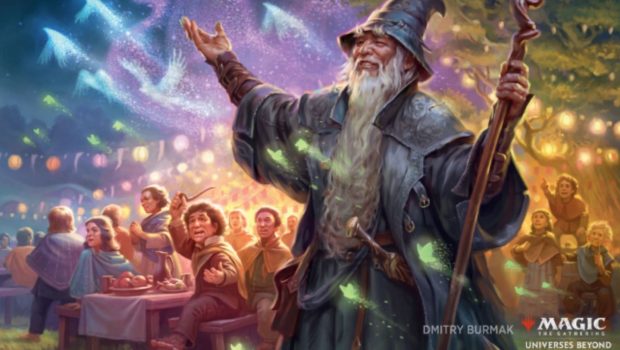 Magic: The Gathering’s Secret Lair Drop Series features ultra-collectible, specially curated cards that are only available for a limited time. Fortnite will be getting two Secret Lair drops of its very own that will encapsulate iconic in-game locations and characters. The Secret Lair x Street Fighter drop features classic Street Fighter characters like Chun-Li, whose card includes the thematically appropriate mechanic multikicker.

Earlier this year Wizards of the Coast announced plans to explore Universes Beyond, a way for fans to play Magic: The Gathering in fictional worlds beyond Magic’s planes. The next addition to the Universes Beyond series is The Lord of the Rings: Tales from Middle-earth™, where players can battle for The One Ring with Aragorn, ride with Nazgul, scheme with Saruman, or journey into Mount Doom. Gandalf, Gollum, Frodo, and more will be part of a Magic: The Gathering booster release in 2023 that will immerse fans in Middle-earth.

Universes Beyond will also see Warhammer 40,000 commander products coming next year. Fans can look forward to four decks with new art, new cards and reprints that are all set in the world of Warhammer 40,000.  Players can look for the chance to head into battle with Space Marines battling against other factions from the 41st millennium in Q3 2022.

“Magic is the core of our business and the brand has never been bigger,” said Chris Cocks, President of Wizards of the Coast. “From partnerships with pop culture touchstones like Street Fighter, Fortnite and The Lord of the Rings to a Netflix animated series launching next year – there has never been a better time to be a Magic fan.”

The highly anticipated Magic: The Gathering animated series will be available on Netflix in late 2022. The animated series is currently in full production and Wizards of the Coast confirmed today that Brandon Routh (credits: Arrow, The Flash, Superman Returns) will be the voice actor for Gideon Jura, an unfalteringly heroic Planeswalker in the Magic: The Gathering multiverse.

While the series brings together familiar and well-loved Planeswalkers for Magic fans, it also introduces new characters and kicks off a completely new story, so anyone—even if they’ve never played Magic before—will enjoy the story from episode one.

An upcoming novel from acclaimed fantasy author Django Wexler is set to release alongside the launch of the Netflix series and provides richer context as a fast-follow prequel to the show. The novel expands on the events that unfold in the Netflix series and dives into how Gideon Jura and Jace Beleren bond—and distance—as they share causes, but distinct perspectives and abilities.

To round out Magic Showcase 2021, Wizards of the Coast unveiled their upcoming premiere set releases coming in 2022. Kamigawa: Neon Dynasty will launch in Q1 2022 and is set in the classic Magic plane Kamigawa, but 2,000 years in the future. Launching in Q2 is Streets of New Capenna, a world of grit and glamour that mixes angels, demons, and Magic. Players will take on the role of one of five crime families and vie for power in the city.

Dominaria United will be released in Q3 2022 and takes players back to Dominaria, the plane where it all started in 1992. Rounding out the year is The Brothers’ War one of the most important and foundational stories in Magic’s history launching in Q4 2022, the perfect plane to revisit for Magic’s 30th anniversary.

To learn more about everything announced today during the Magic Showcase please visit this link.

About Magic: The Gathering
Magic: The Gathering’s compelling characters, fantastic worlds, and deep strategic gameplay have entertained and delighted fans for more than 25 years. Fans can experience Magic through the tabletop trading card game, the digital game Magic: The Gathering Arena, a New York Times bestselling novel, and a critically acclaimed comic book series. With more than 40 million fans to date, Magic is a worldwide phenomenon published in 11 languages in more than 70 countries.