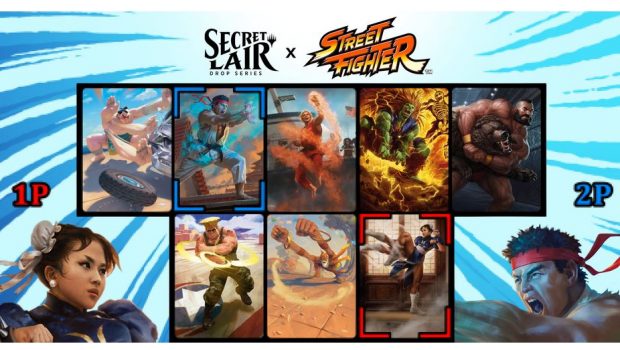 Wizards of the Coast, a division of Hasbro, Inc (NASDAQ: HAS), today unveiled the roster for its limited-edition Magic: The Gathering Secret Lair x Street Fighter™ drop series, which is now available for preorder. The ultra-collectible, specially curated cards are a Magic: The Gathering crossover with Capcom’s Street Fighter – one of the most influential fighting game franchises of all time celebrating its 35th anniversary this year – depicting eight iconic characters from Street Fighter™ II.

Street Fighter II and its original eight playable characters not only informed the art style for the drop, but they also inspired designers to implement thematically appropriate cards with unique abilities for each character. Chun-Li, one of the most recognisable and beloved Street Fighter characters, has a “multikicker” effect, an homage to Chun-Li’s signature move.

“Street Fighter and Magic: The Gathering come from very different genres, but we’ve both been bringing amazing characters, rich gameplay, and social connections to our fans for decades,” said Mark Heggen, Product Architect at Wizards of the Coast. “We’re lifelong fans of Street Fighter, and this partnership has been a dream come true. Now, if you’ll excuse me, I need to get back to tuning my absolutely unstoppable Blanka deck.”

In addition to the Secret Lair x Street Fighter drop, Wizards of the Coast today revealed a slate of Magic: The Gathering cards celebrating the recently launched set Kamigawa: Neon Dynasty. The rest of the Superdrop includes: