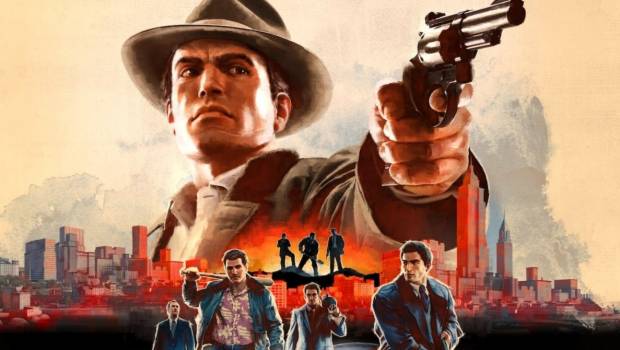 Summary: If you are looking for a crime caper worthy of Scorsese, this is it.

The Mafia series has always been a quiet outlier in my eyes; rather than the bombastic and over-the-top antics that GTA and Saints Row were famous for, Mafia chose to be a more realistic and mature love letter to one of America’s most romanticized eras. That’s not to say that the series hasn’t had its fair share of shortcomings, however I believe that the series has always put cinematic storytelling at the core of its focus. So when 2K announced that the Mafia Trilogy was on its way, I was more than excited to go back and check out a series I had long forgotten about.

Mafia II: Definitive Edition opens the story with a very explicit statement. “MAFIA 2 DEFINITIVE EDITION PRESENTS THE GAME’S NARRATIVE CONTENT IN ITS ORIGINAL FORM FROM 2010. THE GAME INCLUDES CULTURALLY SENSITIVE CONTENT AND THEMES, AND IS INTENDED ONLY FOR MATURE AUDIENCES“. That’s a fair statement, the game does indeed feature language that is racially insensitive, but appropriate for the era that it is set. It has moments where women are nothing more than window dressing, once again reflecting the attitudes of society as a whole. It also includes collectible Playboy magazines, a pile of vicious murders. The game does not shy away from this content, and while that can cause great discomfort depending on your thoughts on all of the above, I think it goes a long way to make a well rounded world that is reflective of the time it is trying to portray. I applaud the developers for not getting too heavy handed or skeezy with any of it. It feels like Scorsese was an executive producer, and this could almost be considered one of the great tales of the mob.

Mafia II tells the epic tale of Vita Scaletta, an Italian-American who is sent to war after being pinched with his best friend Joe robbing a jewelry store. During his time serving in Sicily, he is shot and given a temporary discharge and sent back home to Empire Bay. During his absence, Joe has become a bit of a mover and shaker in the seedy underbelly for the city, and before long Vito’s discharge papers are made permanent and we follow the rise and fall of this lovable duo as they make their mark on the city, climb the ranks of the syndicate, and become “made men”. 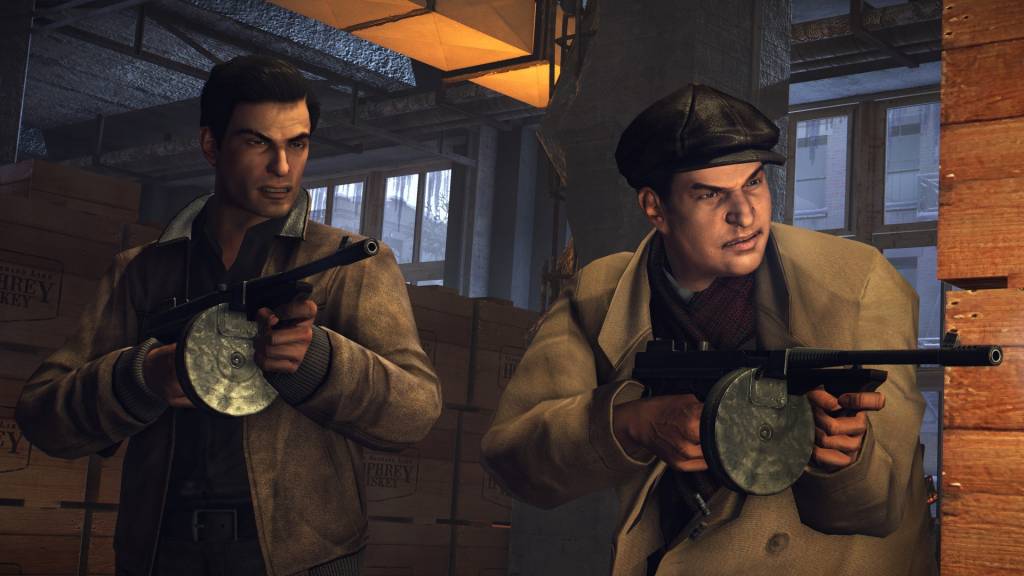 It’s a fairly typical tale, one that we’ve seen in the best mob films out there, however it’s done with such reverence for the period that you can’t help but get swept up in the notion of it all. Every main actor in this game stands out as someone believable, a bombastic catalyst for Vito’s actions that can at times, leave him questioning whether he made the correct choices in life. That’s actually one of my favorite elements to Mafia II, the fact that Vito is not a one dimensional character. He plays the role of tough guy scumbag very well, but he’s also torn between his loyalty to his best friend, his mother and sister, and his new Mafia family. There are times where you can really sense that he’s at wits end, but he always seems to overcome and just keep rolling with the punches. He has morals, a sense of pride, an ambition to make a better life for himself, and when compared to some of the more unsavory characters you will meet, he’s not “that” bad.

While the story does go some interesting places, the parts in between those big narrative beats are often slow and tedious. There were several times during the story where you are sent on what is essentially busy work, the prime example being when handing out cigarettes from the back of a truck. This segment TAKES FOREVER, and while some of that can be attributed to the fact that this game is indeed ten years old, it just feels unnecessary now. Then there’s the fact that the world you’re living in is quite barren. Empire Bay is alive in the sense that there are people driving and walking around, however outside a few specific stores that are used to purchase clothes, upgrade cards, order food, or purchase guns, there’s nothing to do except drive to the next quest market and keep the story chugging along. There are long stretches of driving, with little distraction, that towards the end of the game definitely begins to wear thin.

There are certainly some memorable shootouts, ones that have stood the test of time and still feel unique today. The window washing mission is an utter treat, the meat packing plant is a great mix of stealth and full on offense, and the Red Dragon Inn feels like a John Woo movie 50 years before its time. However the combat mechanics as a whole, they haven’t aged so well. It’s a pretty basic cover shooter, and the weapons often feel extremely inaccurate and lack any true weight. Thankfully the atmosphere and the story more than make up for it, but it certainly feels dated, which his a shame because the atmosphere is just so damn perfect. 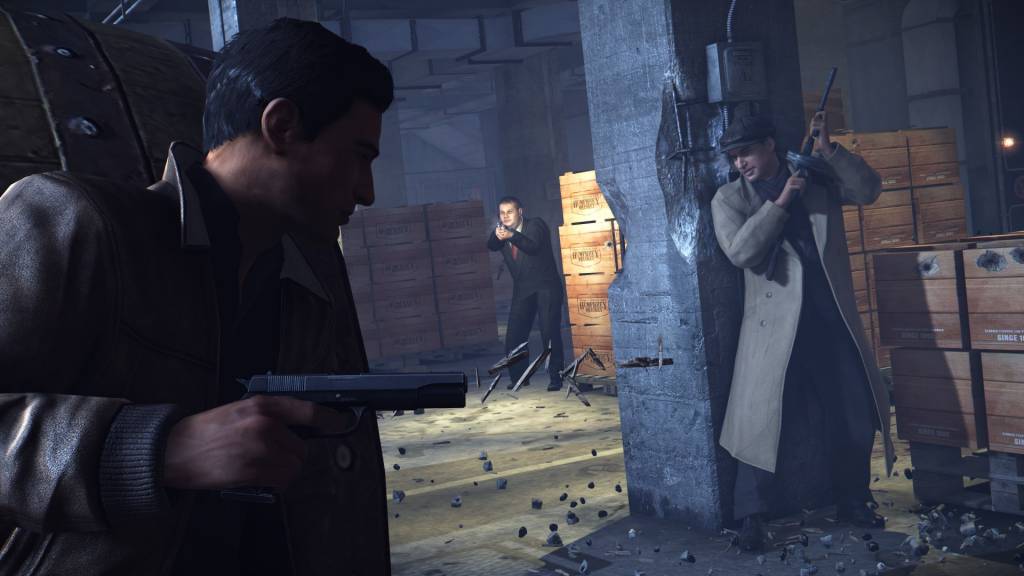 The fist fighting mechanics however, I’m not willing to put that down to age. These forced hand-to-hand combat scenes feel awful. Instead of ferocious trading of blows, it feels like a weightless drunken dance until you’re lucky enough to land a combo. There’s an entire chapter of the game that takes place during a prison sentence, and it feels as though it drags on for about 47 years. It drags on and on, subjecting you to what is essentially a long-winded tutorial that teaches you a few basic moves for the hand-to-hand combat, and even after all of that it’s still lackluster. I never played Mafia II when it released in 2010, so I cannot comment on how it felt when the game was originally released. However what I can say is that 10 years later, it feels pretty bad.

Which brings me to the crux of it all – Mafia II: Definitive Edition is just a HD up-res of the original Mafia II, with some extra bonus material. If you found issue with the lifeless city and the combat, or you didn’t enjoy the story back in 2010, this is going to do absolutely nothing to change that. This is very much indeed the same game, it just looks a lot nicer at higher resolution. That said, the character models do look a little iffy, especially after we’ve just seen those GORGEOUS screenshots for the original Mafia remake that is on the way.

Overall, Mafia II: Definitive Edition tells a story that is gripping and while it may not be largely unique in the span of Mafia lore, it’s one of the best available in video game form. I genuinely cared about Vito and the terrifying criminals that surrounded him. I grew to love their antics and laugh at their quirks, and feel sorry for the situations that they found themselves in. I think it’s a little unfair to class Mafia 2 as an open-world game, because the city does nothing but offer the setting for the story to g from point a to point b. If you’re looking for a city that is brimming with side quests and random activities, you won’t find them here. What you will find is a bittersweet, interesting period piece that looks at time that is not often explored in video games, and it’s a pretty damn memorable one at that.