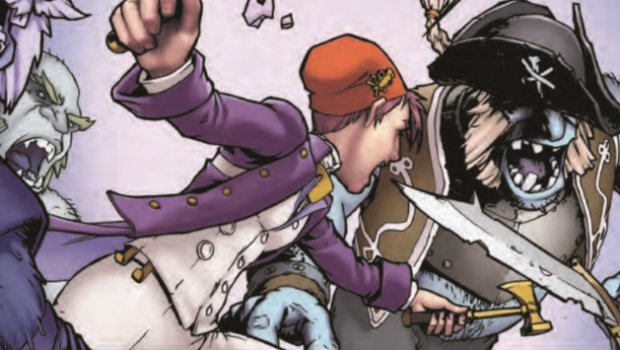 Summary: Step into a world full of the weird and wonderful!

It’s always uplifting to read a comic that transports us from the everyday and mundane to a place of dream-like imagination. For the reader there is a sense of escapism and wonderment at being able to immerse yourself in another world, an exotic and unusual world full of weird creatures, unknown customs, alien landscapes and unexpected dangers. In the latest issue of Gene Ha’s new creator-owned comic series, Mae, we see and experience just that. This is the issue where things start to get really interesting. 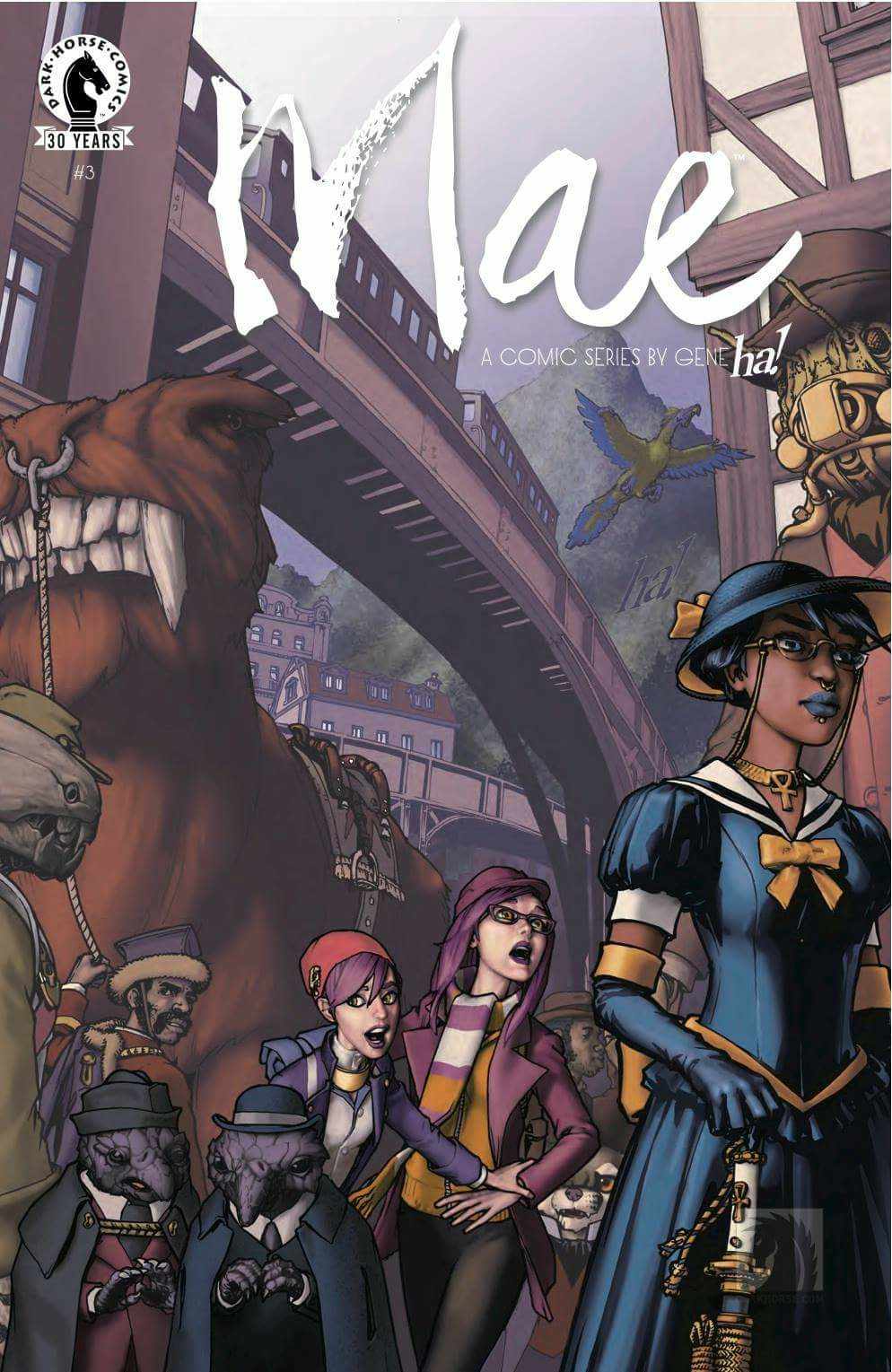 OK, so let’s quickly recap some things. Previously in this series we have been introduced to Mae and Abbie, two sisters who are complete parallels of one another. Abbie has sporadically disappeared and reappeared throughout most of Mae’s life and there has always been a lot of mystery and unanswered questions surrounding Abbie. For the past seven years Abbie has been missing and out of the blue she appears in the local sheriff’s office, asking for Mae to help her out with bail. Mae is in shock and fears that she doesn’t even know this person anymore as it’s been so long. Abbie comes across as unpredictable and eccentric, dressed in strange military garb and talking about a portal to another world. She claims to have been the Queen of a race of giant talking cats, usurped tyrants from thrones and become a war hero. Naturally a lot to take in for Mae and very hard for her to believe. From this point onwards things quickly escalated into a tumultuous series of events, as we quickly find out that Abbie is wanted by the tyrannous House of Zemetrasi, a ruling family who are at war in this world. After they are viciously attacked and their sick father is abducted, Abbie is forced to face the music and venture back into this mysterious portal and tie up loose ends. 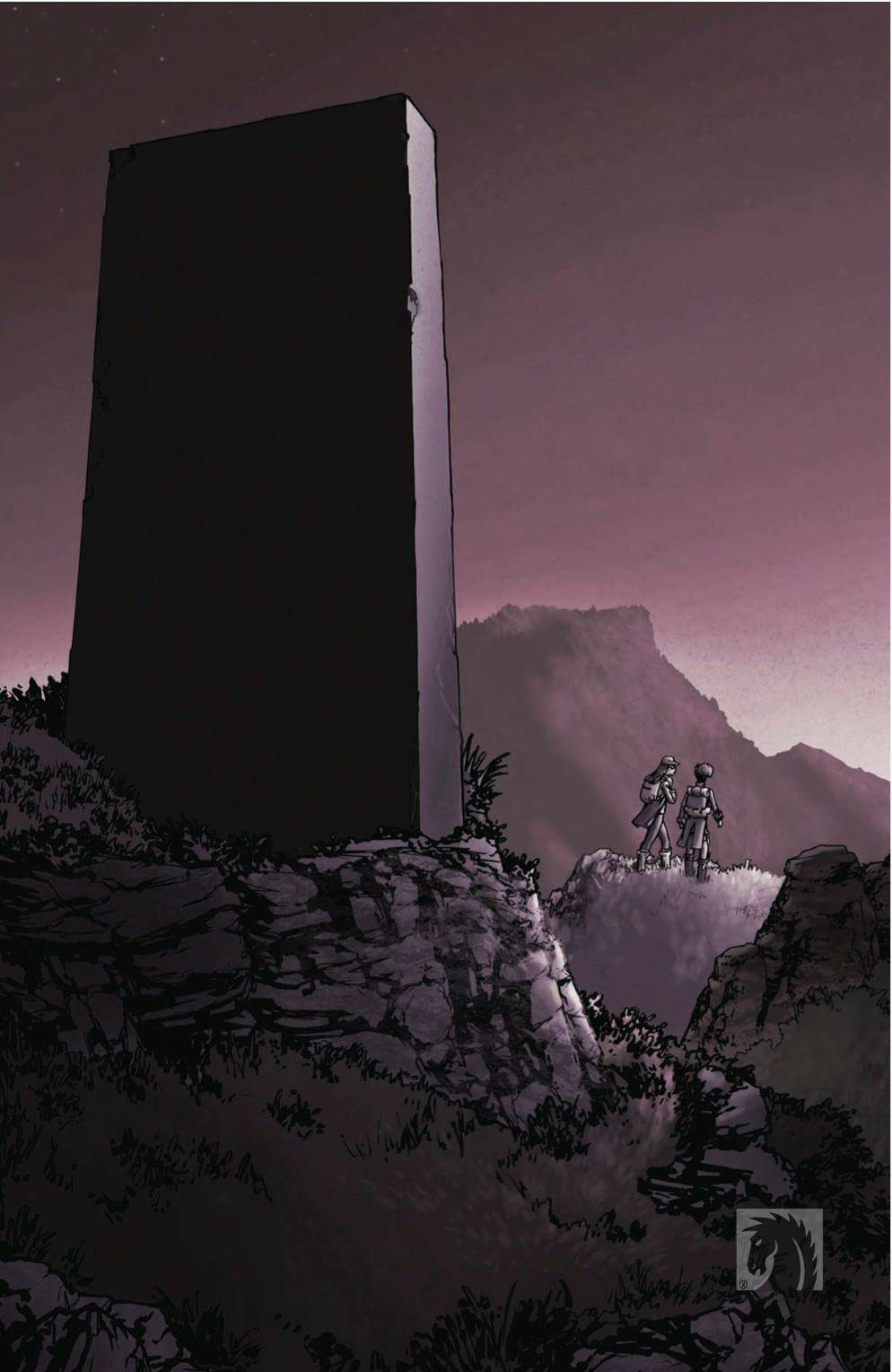 Up until this point, I was wondering why the series is called Mae and not Abbie. So far the rebellious and carefree Abbie has taken centre stage whilst Mae seemed more like a companion, rather than the leading heroine. However, in this issue things change as we start to see Mae take on a more prominent role with the focus centering more around her and less around Abbie. Their relationship is an interesting and complex one, filled with apprehension and trust issues. These two haven’t seen each other in years, and the last time they did they were both children. It would be like getting to know someone all over again. They might be sisters but they really are essentially strangers. However, that sisterly bond filled with striking similarities and funny nuances that siblings have with one another is still there and this leads to some very sweet and touching moments.

I actually really get the kind of person Mae is and she comes across as very relatable. Her shock at the situation she is in feels very real, as we initially see a very excited and enthusiastic young woman, who wants to run away and be part of an epic adventure. She kind of reminded me of Rose Tyler or Amy Pond, all women who embody a strong sense of escapism and wish to step through the portal to a strange new world and journey on an epic and unknown quest. It all sounds so romantic. However, when Mae is faced with the reality of this situation, it is all too much for her and is quite overwhelming. It’s one thing to fantasise about dreams like this but actually faced with the reality of stepping into the unknown she gets scared, anxious and unsure about going. Mae has no choice however, and once she steps into this world, her fear quickly vanishes and it replaced with an almost child-like feeling of awe and wonderment. This contrasts with Abbie, who is almost jaded and wearied by the world behind the portal. An interesting contrast, which works really well with the dynamic that these two have with one another. 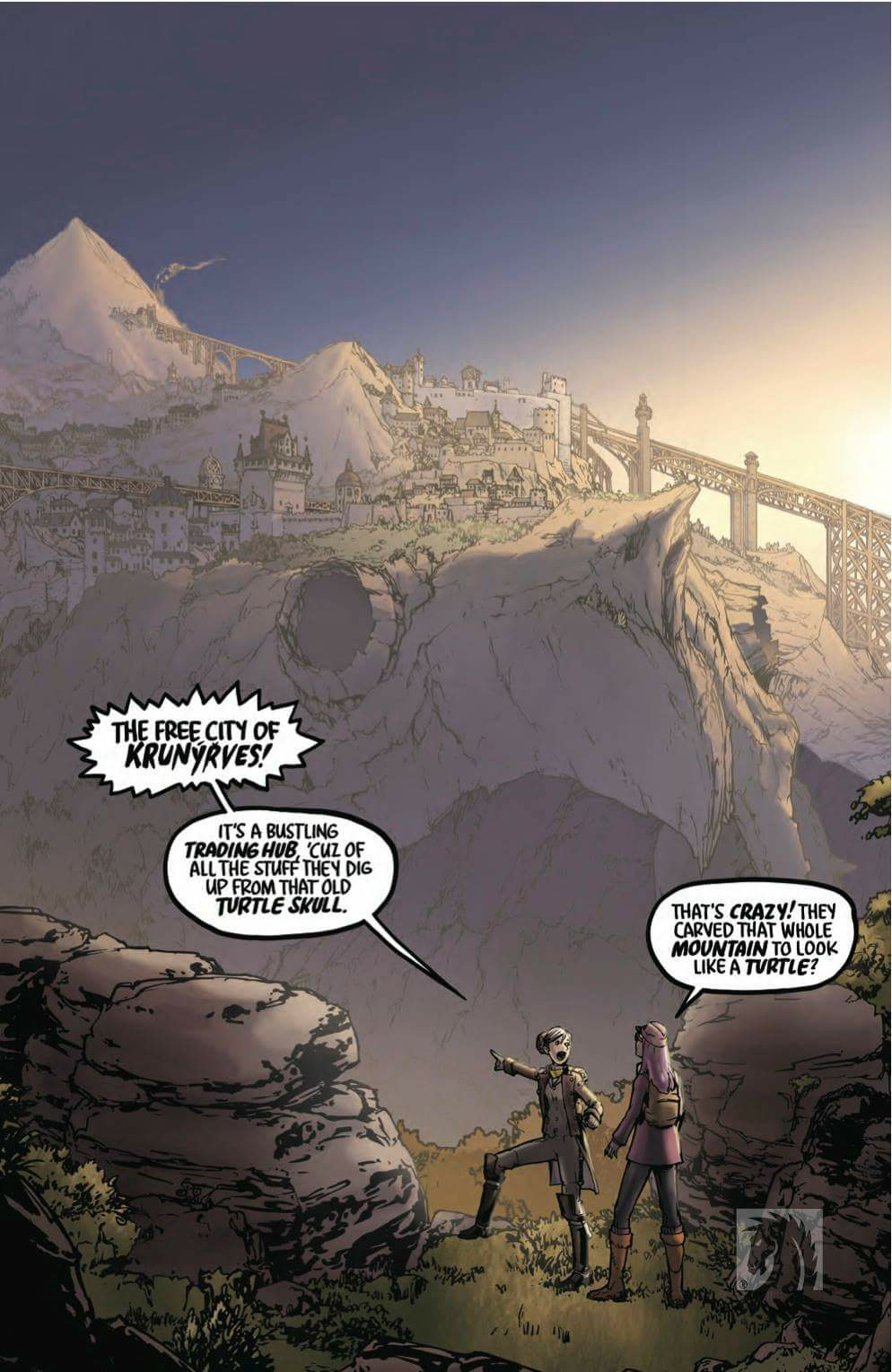 What really appealed to me with this issue is its overall visual impact. The portal, which is a monolith-like structure transports them straight to the free city of Krunyrves, a trading hub perched on top of the back of the fossil of a giant turtle. This reminded me of the world-bearing cosmic turtle mythology that appears in a lot of folktales from all around the world, from China, India and South America. I also thought it was clever of Ha to not only focus on the exotic and different but also the normal and mundane that he has inserted in this world. For instance, chocolate and peppercorns are valued currency and an incredibly rare commodity. Also many of the local inhabitants aren’t only made up of alien creatures but also humans, as this city was founded by African Americans from Earth.

Gene Ha’s art in Mae is very unusual and different to what I was expecting. It has a very abstract nature about it, with exaggerated features and accentuated characteristics and qualities. I found myself enjoying his playful art and liking the fact that it is a little different and unusual. It also really fits in nicely with the magical new world and I personally found that it worked better here than it did on Earth. Wesley Hartman’s colouring is also interesting and heightens the otherworldly tone of the story. There seems to be a general purple palette with lots of pastels and random pops of colour and I found that it really gave an almost magical vibe to the whole story. 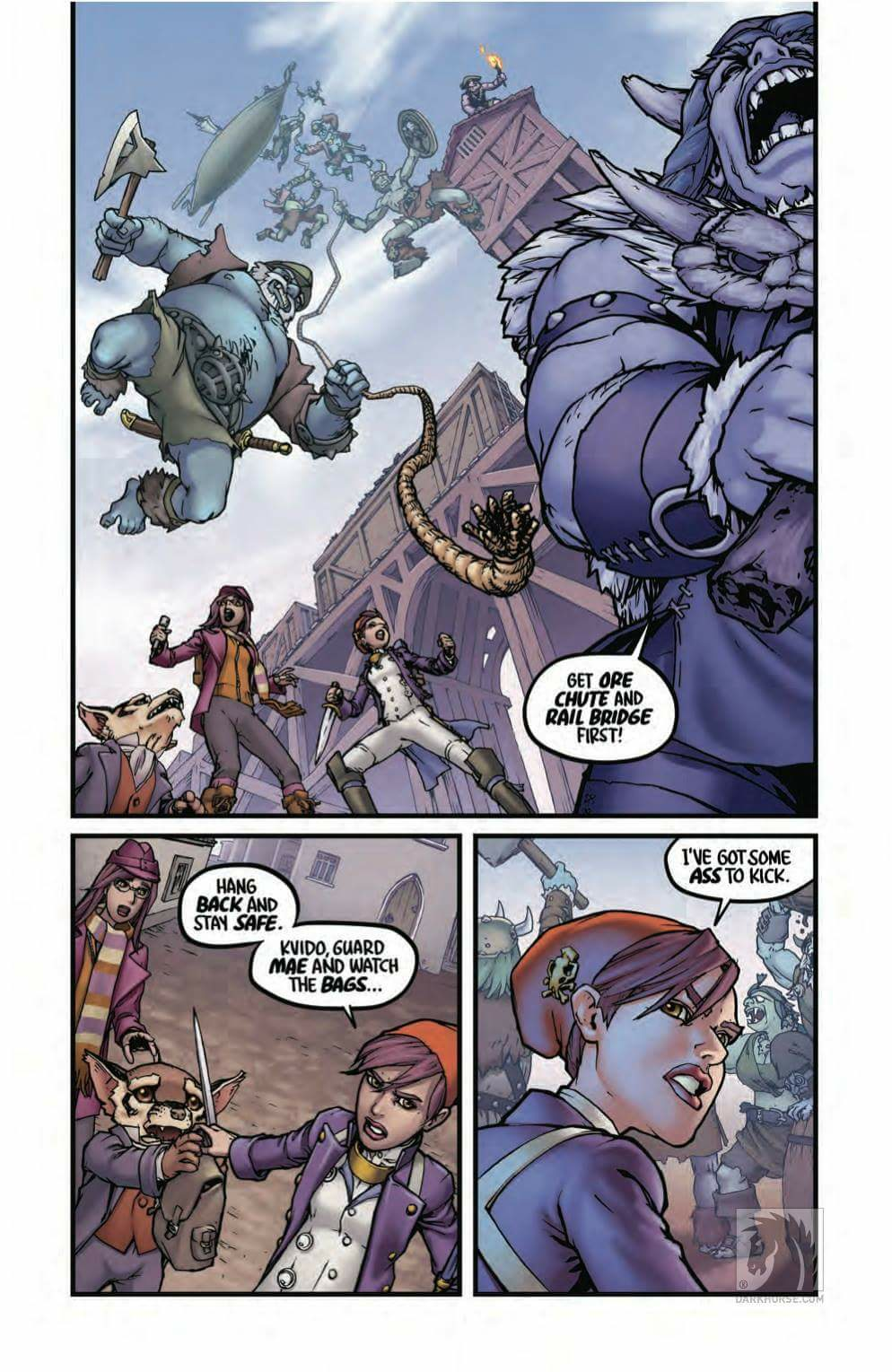 Overall I’m liking the new direction that Mae is taking. The initial reservations I had about this series are going and I find that it’s all starting to shape itself into an interesting and cohesive fantasy tale with some dynamic and curious characters. The whole story has a very Oz-like feeling about it and that mixed with these two strong and well-rounded characters makes for a fun and entertaining read. I’m looking forward to seeing where this adventure is taking us and discovering this new alien world that Gene Ha has created. 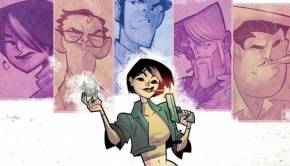 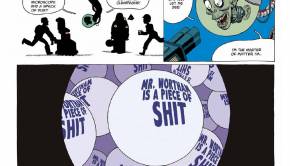