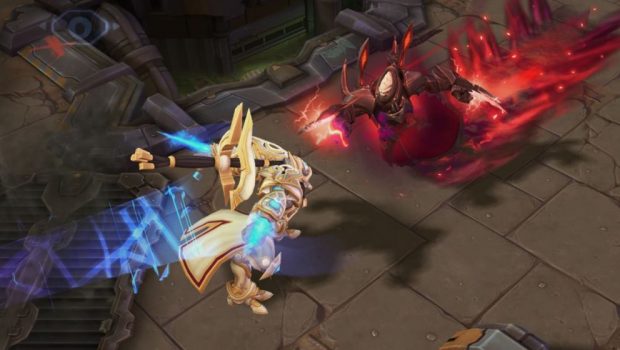 Machines of War is Heroes of the Storm’s huge, new in-game event that brings StarCraft to the Nexus!

Braxis Holdout is a medium-sized, two lane map, with four mercenary camps, and a boss located in the centre of the zone. Braxis was originally a remote, hostile planet that the Dominion used to conduct experiments to try turn the Zerg swarm into a weapon they could unleash on their enemies. Though the Dominion’s main psi disrupter was destroyed, this space platform’s beacons remain fully operational and ready to be used. Capture the beacons and watch what happens when a flood of weaponised Zerg ravages the battlefield!

Xel’Naga artifacts have started to appear all across the Nexus, and SCVs are being deployed to grab them! All players need to do to participate is log into the game and collect pieces to restore the artifact, but watch out, the SCV’s are trying to interfere! For more information, visit the Official Heroes of the Storm Patch Notes here.

Not all heroes are born of altruism… some, like Alarak, simply desire vengeance. As the new Highlord of the Tal’darim, Alarak leads his people to a destiny free of the corrupt influence of the fallen xel’naga, Amon. Alarak is a ranged assassin with a mix of devastating primary and heroic abilities, including Deadly Charge, which hits all enemies in its path, and deals a huge amount of damage. Counter-Strike offers one second of protection, in which any incoming attack is reflected back at its source. Alarak’s primary skills, Discord Strike, Telekinesis, and Lightning Surge all make him a fearsome opponent to tangle with on the battlefield! For more information about his abilities and playstyle, visit the Heroes of the Storm website here.

The second season of Heroes of the Storm Ranked Play is now live, and includes several adjustments and improvements based on community feedback. Season 2 brings with it a stack of new rewards to earn, including player portraits, mounts, and in-game gold, based on your performance, as well as updates to the Grand Master League. For a full explanation of what to expect from season 2, visit the Heroes of the Storm blog here.

Enjoy a Free Hero on us!

Players who log into Heroes of the Storm from today will be rewarded with a FREE hero! You will initially be given a choice between three characters: Tyrande, Anub’arak, and Thrall. If you already own those, an alternative list of Nazeebo, Sonya, and Uther will be made available. Players who own all six will receive an equivalent amount of in-game gold (4,000) to spend however they like! For more information, visit the Official Heroes of the Storm blog here.

Machines of War is live now, and is free for all players. To celebrate, we have a very limited number of bundle codes available that include Alarak, an exclusive in-game mount, and a range of StarCraft-themed skins. Please let us know if you would like one, or have any questions