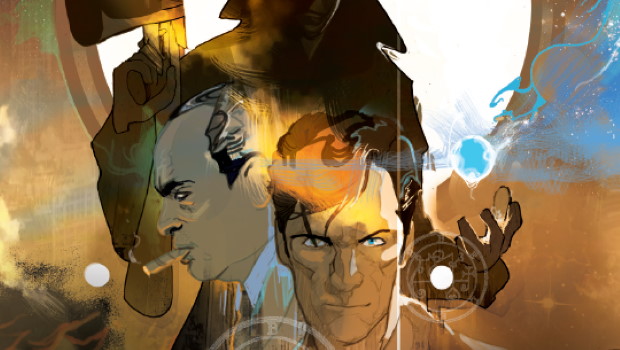 Summary: Elliot Ness and the Untouchables are re-imagined in a world in which alcohol isn't the prohibited substance but rather Lick, a drug that grants the user magic powers. The what may have changed, but the who remains... Ness and Capone will clash!

1930’s Chicago… a place working on two levels, one the straight laced day to day, the other a wild and crazy world… not fueled by alcohol, but Lick, a drug that grants whoever ingests it magical powers. But there is one man who will stand against this dangerous scourge, Elliot Ness! But Ness won’t have an easy job cleaning up the streets of Chicago, not with Al Capone standing in his way.

It’s an interesting spin to substitute alcohol for a drug that grants magical powers. I guess in a way it’s the same as what some people imagine alcohol to do for them. Touted as a kind of Untouchables with magic it has a lot of it’s setting more or less filled in with just a bit of a change via the impacts of the magic. Probably about the only issue I had with the story is Ness’ personal relationship to Lick… I suppose there’s every possibility the real Elliot Ness consumed the very thing he was fighting to remove from society, but I doubt it was as influential as the prohibited substance here. Obviously it makes the story more interesting to give Ness access to the powers he does… but it also makes the whole “untouchables” element seem somewhat redundant as he is really no better than those he is chasing.

For the most part the art is quite lovely, I especially love the depiction of Candice. What I think lets the art down those is the colouring, at least I think that’s where the issue is. My problem (and maybe it is just me), is that some panels get a bit confusing as to what is going on. I think the problem is that there is a lot of detail in the images but some of those highly detailed images have a very limited colour palette so the delineation between different elements is hard to make out.

Overall it’s an interesting new twist to the story of prohibition, there are some story elements I thought were a bit “off” or an odd choice but the pacing is good and there are some interesting characters to draw you in. Worth a read if you like a bit of magic and classic crime fighting… but probably not everyone’s snifter of brandy.