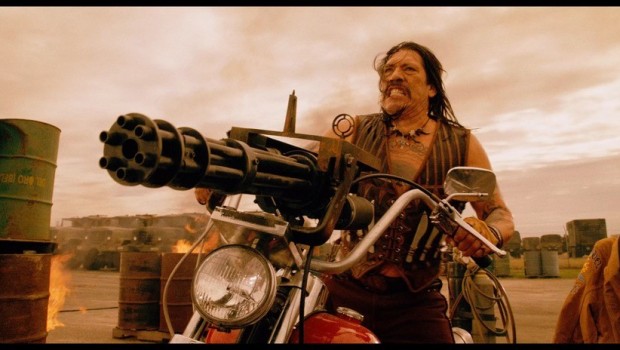 Machete Kills’ one redeeming, clever moment is ironically a teaser trailer that opens the film, previewing Machete Kills Again…In Space!, the third unreleased sequel that will be set in space. Unlike the main feature, the trailer is short, punchy and very funny. It acknowledges and embraces the ridiculousness of the series and its own shoddiness. Comparatively, Machete Kills is a long, bloated, unfunny cash grab, lazily cobbled together to bridge itself towards another sequel. Its existence is hard proof that the evolution of this knucklehead series, beginning as a fake trailer in the Quentin Tarantino and Robert Rodrigeuz Grindhouse collaboration, was merely bad science.

The project granted action star Danny Trejo a new 80s style action vehicle to work in, playing a Mexican Federal Agent who is mythical and near indestructible. The gimmick of seeing Trejo onscreen again hasn’t so much worn off but dropped dead. This sequel is lethargic and tedious. It’s weighed down by dull scenes of exposition and repetitive battles where the main character is never in any danger. Worse is the plethora of star names that do not phone in their work but simply appear. The result is a film that sets its ambitions deliberately low, proud and stupid, but even on that level Machete Kills can’t satisfy and ends up being an interminable bore.

The director Robert Rodriguez started his career with the impressive feat of making the action film El Mariachi for just seven thousand dollars. He also took test medical drugs to fund his short films. The problem is that he’s never left El Mariachi behind. All his films, outside of the kids movies he’s made, have tried to duplicate the same manic gunplay. His most interesting film is Sin City because it origins perfectly suited Rodriguez already comic stylisations. Despite being best friends with Quentin Tarantino though, Rodriguez is yet to challenge his audience with anything more than hyper-stylised cartoon violence.

If the direction here is any indication, Rodriguez would rather be elsewhere. The dialogue sequences are long and poorly controlled. Machete (Trejo) has no personality and very few lines. Characters speak over him with boring monologues of exposition, lumping down the next phase of the plot. There are no jokes to lighten the burden of information. Consider this scene: Charlie Sheen (credited as Carlos Estevez) features as the American President who briefs Machete on his mission. The casting is the gag but there are no jokes to support it. Where is the punch line? There is also an unforgivable sloppiness to the film’s editing too. The film jumps between sequences as though scenes were removed and they thought no one would notice. One moment Machete is on top of a car at night but then wakes up in the desert during the day. A countdown clock for a bomb leaps three hours in the space of one helicopter ride. 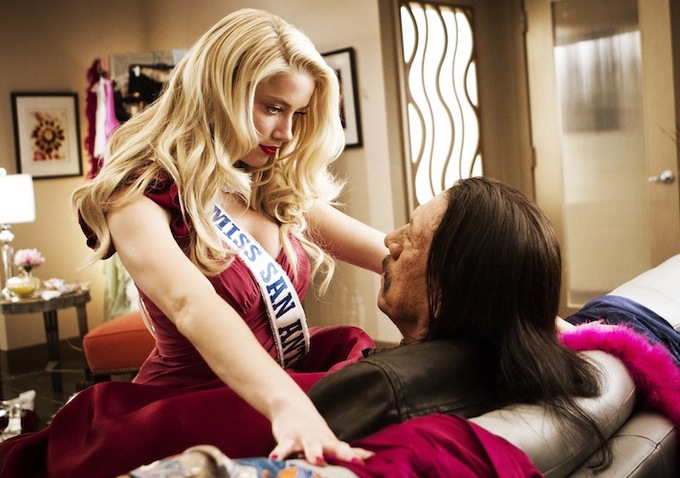 The plot is a meaningless, disjointed exercise in finding different ways to kill henchmen. Machete is asked to stop a schizophrenic lunatic named Mendez the Madman (Demian Bichir) from launching a missile into the US. Mendez has a device inserted into his chest so that if he dies the rocket will launch anyway. Machete is pursued by an assassin called The Chameleon who keeps changing faces, and is played by Cuba Gooding Jr., Antonio Banderas and Lady Gaga, who make little impression beyond small cameos. Machete’s allies are Miss San Antonio (Amber Heard), an undercover agent and beauty queen and Luz (Michelle Rodriguez), who has lost one of her eyes. The strangest inclusions are shared between Mel Gibson as a madman named Voz, who is a Star Wars fan, and Sofia Vergara as a dominatrix. It all ends so abruptly and anticlimactically that you’ll wonder why you bothered.

Rodriguez’s only interests seem to be in balancing casual, juvenile sexism against an execution gallery. When the female characters aren’t dressed down, people are shot, cut in half, sliced up by helicopter blades, burnt, stabbed and any other form of decapitation you can think of. Some of this is disturbing and ill-timed in the wake of real life gun violence. Other moments are tensionless, like seeing Machete shot to blazes, only to return injury free in the next scene. The more ludicrous elements, like the girl with the machine gun breastplates, are dismissed with a shrug of seen-it-all-before. Remember the girl in Planet Terror with the prosthetic leg that doubled as an assault weapon? That’s Machete Kills overall: a bad imitation, not a parody, of a genre that was already crazy to begin with. Now it’s just lazy and unnecessary.

Summary: A long, bloated, unfunny cash grab, lazily cobbled together to bridge itself towards another sequel