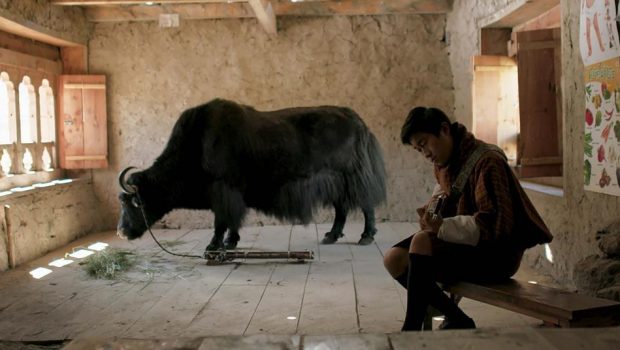 Lunana: A Yak in the Classroom Review

Lunana: A Yak in the Classroom Review Tim Chuma
Score

Summary: While this movie seems like it has made before, some things are standards for a reason. Worth watching with your family and mixed company and not having to worry about content.

Ugyen (Sherab Dorji) is a legend in is own lunchbox who dreams of living in Australia and is four years into five years of government service after training to be a teacher. When his boss says they will send him to the most remote school in the world he complains about having altitude sickness and remarks “you don’t have altitude problem, you have an attitude problem!” His granny shares his boss’ view as he has a “good government job” in her eyes and should not waste it.

Although he grumbles, he agrees to take it as he is waiting for his visa to Australia to come through and reasons he can always leave if he doesn’t like it. His boss did not lie when they said it was the most remote school in the world. The road only goes so far and then it is an eight day hike. Two cow cockies meet him in the last town and seem very friendly.

He does not do much except complain the whole time on the way to the village. His fancy shoes get ruined and when he asks why the farmers don’t have muddy shoes they reply “we don’t step in the mud”. I did like the titles with the towns and villages on the way including one that only had 3 people as it was just the one family.

As expected he does not think that much of the school when he gets there but the farmers and mules are tired and need to rest before he goes back. By the time he settles in and they are ready to take him back the kids and the village have gotten their hooks in and he agrees to stay until the winter break.

If I was to say anything about this it would be “nice”. Even though this sort of movie has been made a lot before, there are reasons why things are old standards as they work. The kids are the stars of the show here including Pem Zam and other people from the village.

The landscape is well used here and hard to do a bad shot with given the scenery in the area where they filmed it. I did like the interiors in the village and they did not turn out to be too dark as you would expect.

Some of the parts of the story seemed a bit twee, such as the old “having so much fun you will forget your iPod” well that can happen but eventually you will still use it. The main character was very busy and involved in village life so it would be easy to forget some things.

A great film to watch with the family or other relatives and not have to worry about content so it is good to show in mixed company.