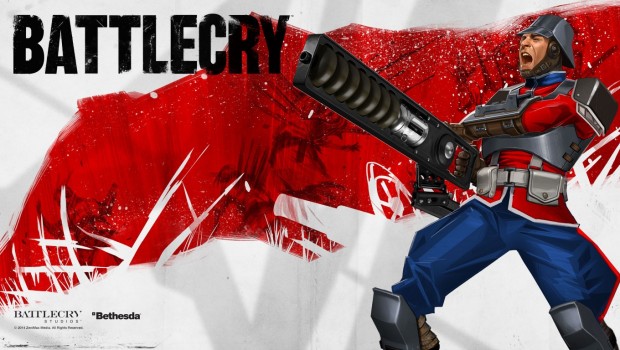 Welcome to Impulse Gamer Lucas, tell us how you became involved in BATTLECRY?

I got started with BattleCry Studios when they posted a lead design position. I’ve always loved and respected the Bethesda brand, and the job description hinted at the kind of project I would find exciting. After meeting with Rich and the other principal founders, everything just clicked. It felt like we had all worked together for years.

As for BATTLECRY the game, my first day I brought in a pitch document with a proposal for the game. In one of the many serendipitous moments we’ve had as a team, my pitch almost exactly fit with ideas the rest of the team had been brainstorming earlier that day. So the game really started with that shared vision and kept evolving from there. 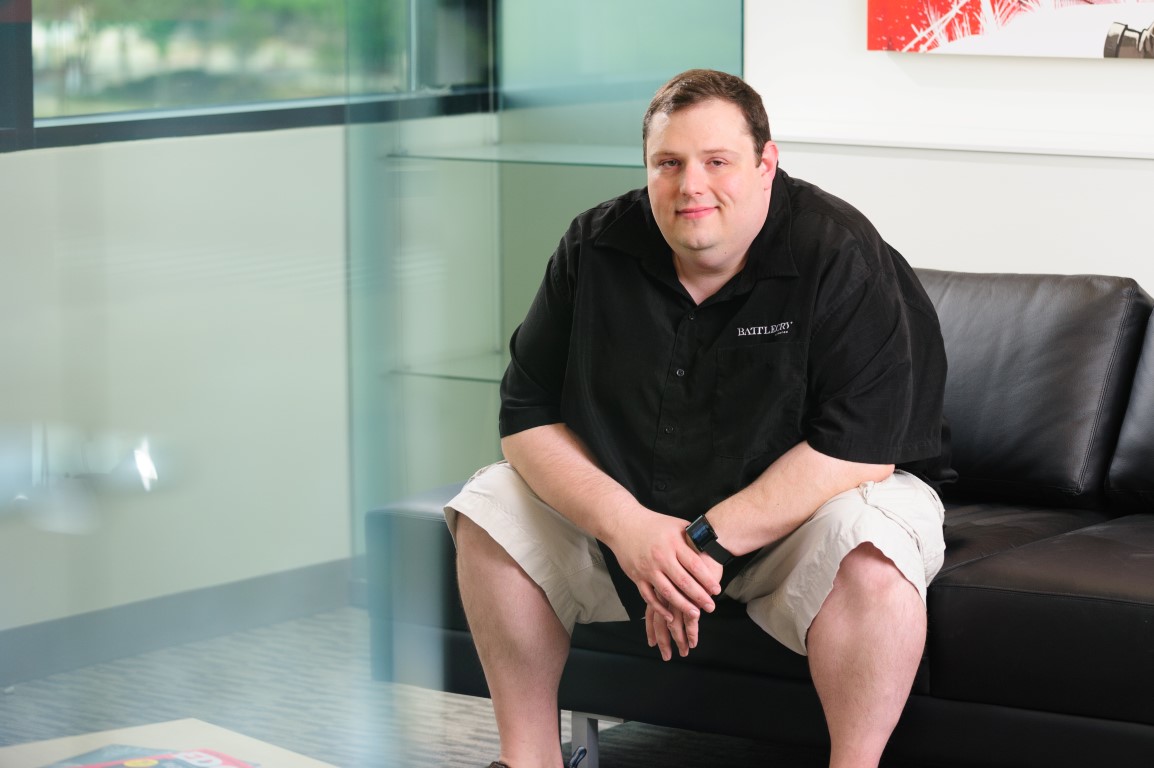 For those that don’t know about BATTLECRY, how would you describe it?

BATTLECRY is a 3rd person team action combat game with up to 16 vs 16 player combat. The combat in BATTLECRY is inspired by the highly animation driven combat you see in single player action brawler games on the console. It brings that fast and fluid visceral fighting into the multiplayer space and mixes it up with unique melee and ranged warriors.

What makes BATTLECRY different from other multiplayer titles?

One of the biggest standouts for BATTLECRY is the fluid 3rd person visceral melee and ranged combat that I touched on. With BATTLECRY we pushed hard to get melee and ranged into the game together and balanced. We made the game action-oriented, so it feels fast and “arcadey”, rather than a slower simulation style of melee.

We have character abilities and strategy, but we wanted you to be able to execute that strategy at a fast pace, more similar to an FPS than some of the slower more tactical approaches you get in MOBAs. Dying or making a mistake isn’t extremely punishing in BATTLECRY, just respawn, get back into combat and try to make up that kill or recapture that lost objective.  With large 16 player teams you have a lot of options on the kinds of strategies your team can accomplish, and the 32 player maps give the game a huge epic feel.

Getting melee only and ranged only character balanced into the same world has had a huge impact on how we build those environments. We have an amazing level design and environment team that has taken lessons from FPS map development and transformed them. Space, cover, verticality, and how you move through the map has all been evolved and updated to create compelling areas for big memorable melee and ranged battles.

Everything comes together to make BATTLECRY a very different game from a standard FPS or a traditional MOBA. 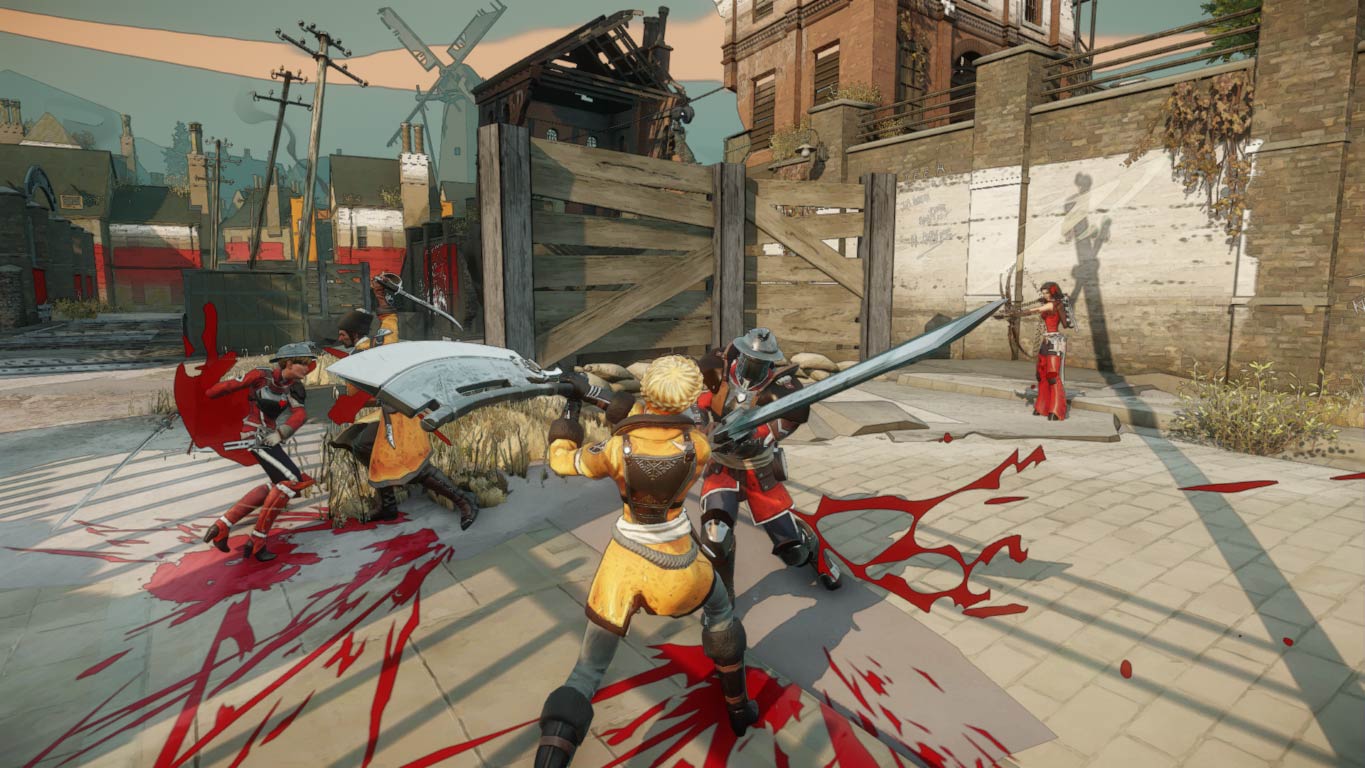 I am a player of opportunity, so my favourite warrior always depends on what is happening in the game. In BATTLECRY you can change your warrior any time you die, and I definitely take advantage of that. When I am just collecting kills, like with team deathmatch, I tend to play the Enforcer or the Tech Archer.

With the Enforcer I can create some great choke points using his shield, and when enemies cluster up on me, punish them with a whirlwind attack. For some of our more open maps I tend to hit the high ground with the Tech Archer, especially if I have an Enforcer already in my squad that I can hide behind when someone comes to take me out.

With our objective modes, like Land Grab, I tend to float between the Duelist and Gadgeteer. The Duelist I use when taking objectives because I can stealth in and take out any defenders, or get out if I get overwhelmed. When I want to defend I will switch to the Gadgeteer and setup some merciless ambushes.

What is your favourite weapon?

I really like the British Enforcer’s sword. His sword is a singularly massive blade that transforms into a shield. In BATTLECRY we have killing blows, big over the top deaths that play when a hit will take out an opponent. The Enforcer in particular has some really great dismemberments and killing blows that make me laugh every time I see them.

The BETA is coming 2015 with Australia and New Zealand getting it early 2015, what are you looking forward to most when the BETA comes out?

I’m most excited about hearing from the players. We have a lot of ideas for BATTLECRY, and we have made what we hope is a game that is going to feel great and be a lot of fun. With beta we get to hear what players like most and what they want to see change. It’s really when we change our approach from making a game for a community to making a game with a community. I’m really looking forward to that. 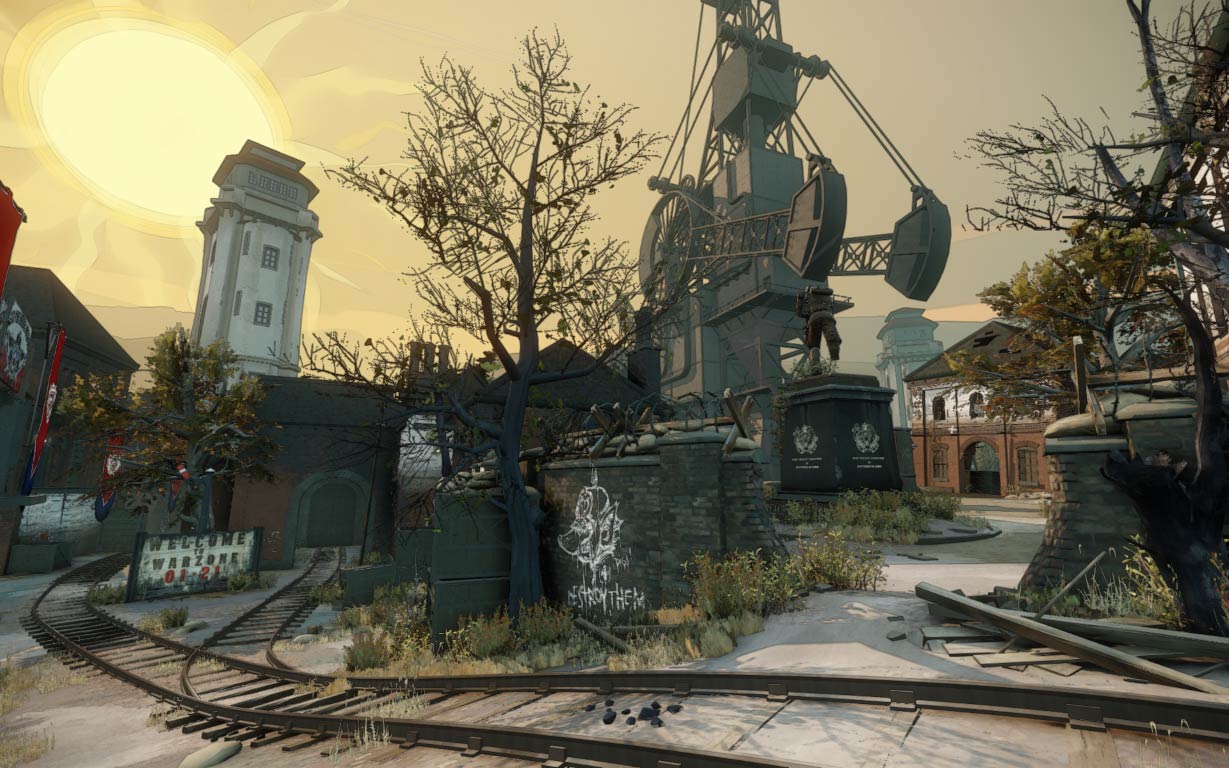 What’s been the biggest challenge with BATTLECRY so far?

One of the biggest challenges has been making both melee and ranged characters that are balanced and fun. When we first started working on BATTLECRY it was hard to find many other similar games. Out of those, we didn’t really find any that hadn’t resorted to giving their melee characters ranged weapons as well.

It took a lot of experimentation on our warrior design as well as our environment design to bring that all together. However it is the heart of why BATTLECRY feels like such a unique experience. The dozens of features we’ve added to the game to make that combat feel so rewarding also makes the game stand out.

The most rewarding aspect of BATTLECRY has been the team and our progress on the game. People are amazed when we tell them the game they are playing is pre-Alpha. They just assume from what they have played that it is something we are putting the finishing touches on. At trade shows, like GamesCom and PAX, players often ask if they can get early access right then and there. I think that is a huge compliment for a brand new team that is working together for the first time.

We have such an incredible team at BATTLECRY. I truly feel fortunate that we have been able to gather the excellently talented people we have here. It frequently surprises all of us that this is our first game together. That makes me even more excited to see what we can accomplish as we push forward into the future. 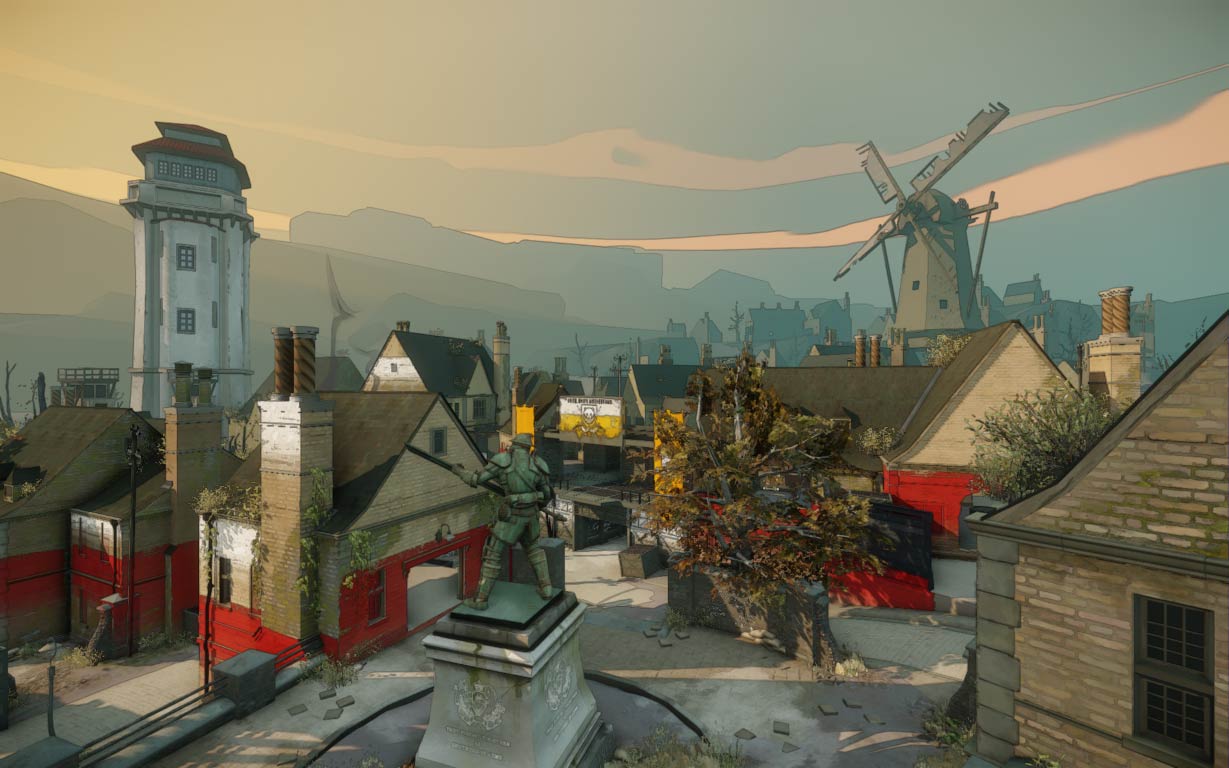 Who came up with the Pansophic Revolution idea?

As with most things at BATTLECRY, it was a few people working together. In this case our writer, creative director, production director, and I all had a hand in the revolution. Once we knew we wanted to explore the alternate timeline of BATTLECRY, and focus on a world without gunpowder, we realized there would be major changes in technology between our world and the world of BATTLECRY.

When looking at our timeline around the turn of the 19th century, the Industrial Revolution was a huge influence. It was an age of invention and large scale manufacturing. Additionally, war always has a huge influence on science, research, and development. It was easy to imagine how removing much of the money and resources that went into gunpowder, guns, tanks, bombers, and so on would have a wildly dramatic change on how technology had developed in BATTLECRY.

At its heart, that is really what the Pansophic Revolution is about; all of the technology and industrialization that was born out of this new timeline and the invention of the Warzones.

What is your favourite part of the gameplay so far?

It’s hard to pick a favorite, but I would say the singular moment of combat. We’ve spent a long time tuning how long a fight should take. Internally we call it “the dance”.

We wanted you to have enough time to have a real duel with a player. Each hit should feel meaningful and you should be able to have just enough time to execute a strategy and react to your opponent. If you win, it should feel like an intentional victory, and if you lose, you should know why. It takes a lot of playing and balance to find that sweet spot, but it is one of my favorite things about the game. It’s also a living thing that we constantly keep up to date.

JOIN THE AUSTRALIAN AND NEW ZEALAND BETA AT http://www.battlecrythegame.com/en-gb

Game Description: BATTLECRY amplifies team-based combat by combining visceral brutality and competitive multiplayer action to create a new gameplay experience. Choose your warrior – each with a meaningfully distinct suite of attacks and abilities – from one of several factions from diverse parts of the world. With strategy, brutal attacks, and unique weapons, fight for power and glory in 32-player battles across the WarZones. This is the life of a warrior, and victory is yours for the taking.

Background: Following a cataclysmic world war at the dawn of the 20th century, the most powerful Empires left standing came together to ban gun powder under The Black Powder Treaty. The short peace that followed gave birth to the Pansophic Revolution – a golden age of industrial manufacturing and design. As technology advanced, old tensions reignited and soon the world faced the scourge of war once more. Fueled by technological Pansophic advancements, the face of warfare has changed. All disagreements are settled head-on by elite teams of chosen warriors from all over the world, with each member specializing in either high-tech ranged gadgetry or sophisticated melee weapons. Trained and bred for battle, they meet each other in sanctioned WarZones to face off for their share of glory.

Take on the role of an elite warrior and engage in brutal, high-action, 32-player battles in a variety of gameplay modes. Responsive, smooth controls unleash violent, high-impact, and stunning combo attacks previously reserved for modern brawlers.  Dynamic movement allows you to seamlessly grapple, evade and mantle to quickly cover distances and evade the other team. Engage in combat and use the game’s Adrenaline system to unlock special powers for a short time or conserve Adrenaline to unleash your lethal Ultimate ability when the time is right. In BATTLECRY, your skill, timing, and teamwork create a diverse gameplay experience.

Choose your side from the powerful Royal Marines, the courageous Cossacks and more as they come online, then build and progress your chosen warrior by earning iron and advancing through the ranks. Each rank unlocks new abilities and effects, allowing deep strategic builds for your Warrior on every Level. Select from classes like: the Enforcer, who wields a massive sword and transformative shield to inflict and absorb damage; the Tech Archer who unleashes a maelstrom of arrows from afar; or the Duelist, using blinding speed and stealth abilities to pick off unsuspecting enemies in isolation.

A World without Gunpowder

Welcome to a world of ritualized combat where open wars are a thing of the past and warriors, the chosen few, risk life and limb in imaginative WarZones to maintain peace. Each Zone is designed to combine positioning, spacing and verticality to redefine your core combat experience. Fight with transformative weapons that harness iron and energy and eviscerate your opponents with swords that transform into shields, bows that can punch an arrow straight through an armored skull, or electrocute your foes with high powered blades crackling with electro-static energy.

The Last Moments of Your Life

Enjoy intense graphics and animations, with immersive third-person cameras as you fight toward life or death. The game’s bold, expressive art style directed by Viktor Antonov (Half-Life 2, Dishonored) supplements the game’s visceral combat and heightens the gameplay experience. Inspired by comic books and illustrations, BATTLECRY’s highly-stylized environments change depending on whether you are winning or losing in the arena.