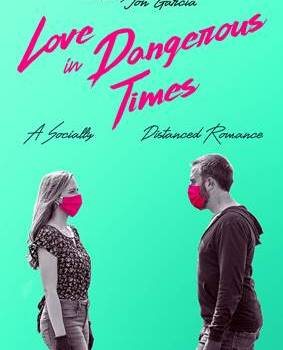 Love in Dangerous Times: A film shot during the pandemic

Love in Dangerous Times is the newest film from acclaimed indie director Jon Garcia (The Falls Trilogy). As a virus spreads quickly throughout the globe, Jason remains ambivalent about its danger. Unable to travel and with his family on the other side of the country, he decides to spend the pandemic working on a play that resembles his life and current circumstances.

As writers-block and loneliness ensue, he begins to turn to online dating to find a buddy for the apocalypse where he meets Sorrel. With the infection rate worsening and feat looming, the two begin to lean on one another for support and while they try to make sense of the times they live in. Ian Stout and Tiffany Groben star.

Love in Dangerous Times will be available November 3 On Demand in Australia.

About the Production
In February of 2020, it was becoming clear that much of the world was in a panic With so many unknowns and the threat of physical and financial crisis, writer/filmmakers Jon Garcia, Ian Stout, and Steven Avalon Gardner began to collaborate on a film project that delved into the complexity of emotions percolating through many as a result of COVID-19. The initial idea was to tell a story about people looking for love during the pandemic, and not just romantic love, but people looking to preserve and repair broken relationships that only desperate times can mend.

The casting process was fairly simple as it felt natural to cast people they’d worked with before, actors they knew and trust. Co-lead Tiffany Groben was an integral part of the experience, she was a newcomer to the group and integrated herself seamlessly into the project. Safety was definitely a concern for this production as universal filming protocols had yet been put in place for filming during a pandemic. For that reason there was an open communication about how best to prevent risk of exposure to the Coronavirus before, during, and after filming.

The process had to move quickly as it was important to the group to capture the feeling of pandemic in real time. Once the script was as sound as it could be, the focal crew and cast quarantined for two weeks; then utilizing masks, gloves, and hand sanitizer donated by friends and family, the production started mid April and wrapped mid May. With Jon Garcia operating camera and directing, Steven Gardner doing near everything else, and filmmaker Ian Stout in front of the camera, they finished the feature length film in 22 days. The production was filmed mostly in an apartment in NW Portland and included 6 other actors, mostly cueing in via video chat or phone. Ian Stout had not acted much before Love in Dangerous Times but threw himself into the role of Jason and carries the film well creating a depiction of the flawed but lovable protagonist.

This concept that started at the very beginning of the pandemic echoed what the filmmakers were feeling at that time; fear and distance from those they love.
The feelings of uncertainty fueled much of sentiments that went into the production and the story would often change in real time according to what was happening in the world and in their own lives during the process.

Love in Dangerous Times was created on a shoestring budget of $2000 with many people donating their time to create something relevant and relatable and  the process was a way for the creators to keep their sanity with the threat of the unknown looming throughout the hearts and minds of people all over the world. It is a film about love in the pandemic created and produced during the pandemic.