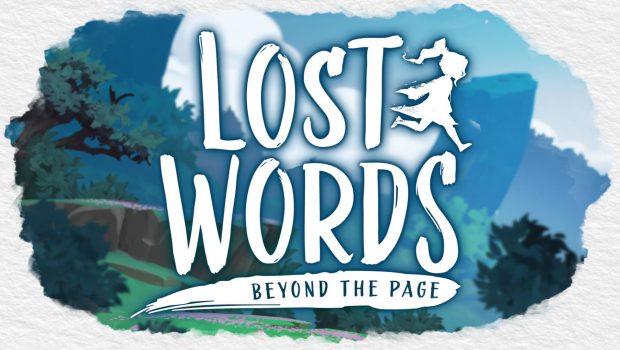 Summary: Though its gameplay is elementary, Lost Words: Beyond the Page weaves a potent story about loss and coming to terms with grief.

As a child, I always aspired to be a writer. Fantastical stories would pop into my head and I frequently found refuge from real life in the worlds I created. So, anyone like me will identify with Izzy, the protagonist in Lost Words: Beyond the Page. While constantly juggling the sorrow of Izzy’s life and the struggle to overcome that ache through her writing, the game competently tackles many issues that accompany the pain of growing up. Though it’s an uneven experience and gameplay is elementary, Lost Words: Beyond the Page weaves a potent story about loss and coming to terms with grief. 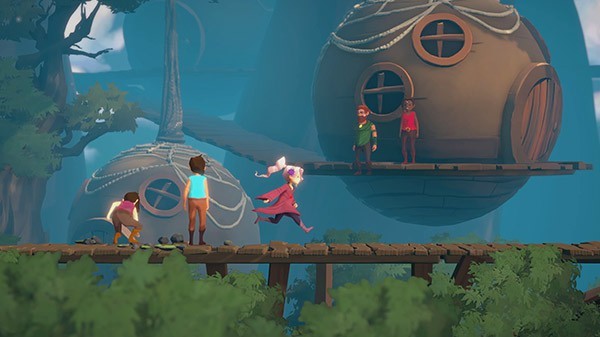 Lost Words: Beyond the Page tells the story of Izzy and her struggle to grapple with her loving grandmother’s deteriorating health. The game has two means of storytelling; alternating between a narration of Izzy’s daily journal and the fantasy story she is writing for her grandma. The game is a 2D puzzle platformer that sees Izzy leaping from word to word inside her journal, and exploring forests and caves within the realm of her fantasy story. 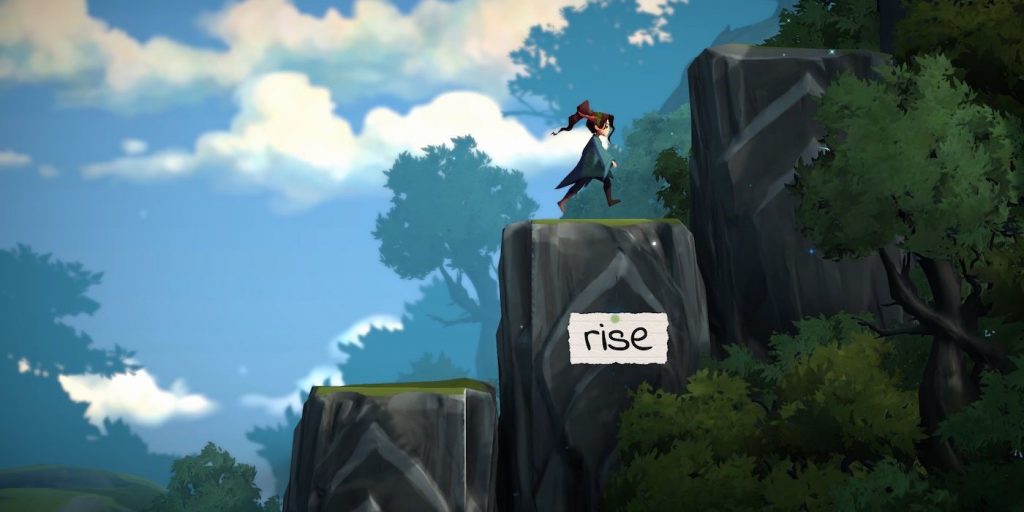 The game’s textures and artwork are lovely; using a combination of water-colored textures and cell-shaded graphics, the fantasy world is brimming with life and mystery. I do wish that same care went into Izzy’s character model and human NPC’s; their detail pales in comparison. Sidonie Maria Šakālis turns in a solid voice acting performance as Izzy, but one of the game’s strongest suits is David Housden’s breathtaking score. It is filled with epic swelling melodies while Izzy is sliding down a cliff, and intimate tunes with a single violin in Izzy’s most vulnerable moments.

While Lost Words starts with the hue of a children’s coloring book coming to life, it quickly delves into some deeper, more intricate themes. Mortality, loneliness, and denial are just some of the topics tackled in the game. Seeing Izzy experience helplessness and the five stages of grief as her grandmother grows increasingly ill and eventually forgets her own granddaughter is heartbreaking. 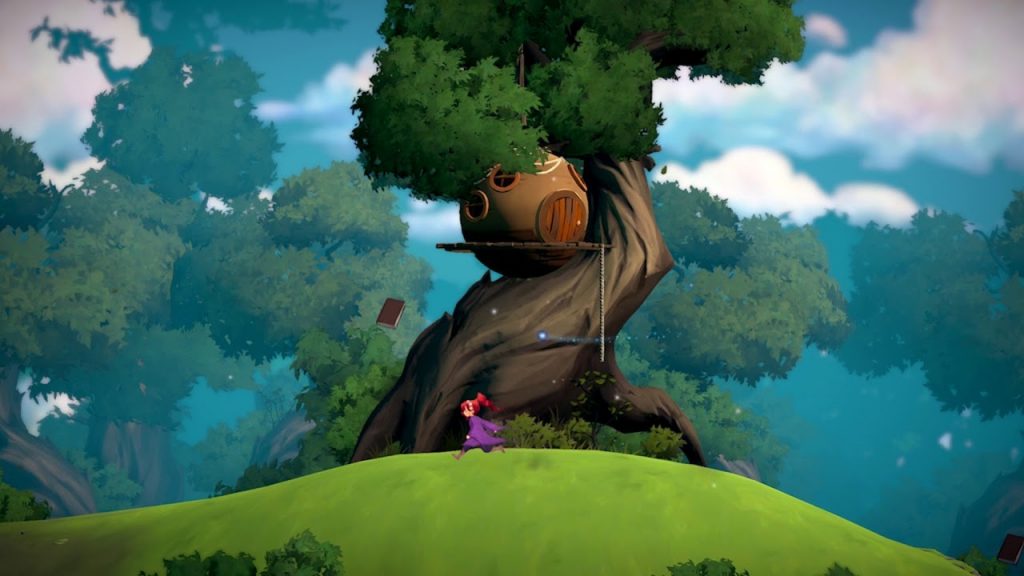 The core gameplay takes place in Izzy’s fantasy world of Estoria, where she is pursuing a dragon that laid waste to her quiet tree-top village. Along the way, she will meet a collection of lovable characters that reflect people or emotions from Izzy’s real life. For example, there are obvious ties between Izzy’s grandmother, and Elder Eva – the wise and beloved sage in the fantasy world. Certain connections between the real world and Estoria are stronger than others, but the ones that do work are spot on; seeing Izzy’s eventual depression and sadness manifest into a fictional beast was tremendously powerful. 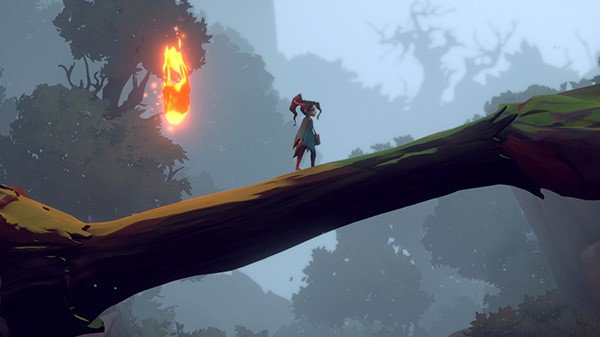 Those expecting innovative or challenging gameplay may want to tamper their expectations. In the journal sections of the game, Izzy will jump to different words on the page to progress the story, while much of the fantasy world gameplay is Izzy simply running to the right side of the screen while making non-punishing jumps or occasionally pushing blocks. Izzy also has a collection of words that can be used to interact with the environment and solve puzzles. For example, “rise” will make the ground under Izzy’s feet elevate, and “repair” will mend decimated structures to allow Izzy’s passage. Though a fun concept, it could be more fleshed out. It is never unclear how to progress, so aside from some brief moments in the final level, this mechanic is rarely intuitive or challenging.

Within Estoria, Fireflies are a collectable item that encourage the player to explore the corners of the map, and to experiment with the platforming mechanics. Yet due to the uninteresting platforming, and unclear rewards for accumulating fireflies, I was never disappointed upon completing a level with fireflies unaccounted for. The fireflies reminded me conceptually of Celeste’s strawberries; not essential for level completion, but a satisfying reward for mastering difficult platforming. But Lost Word’s platforming isn’t difficult; so I would much rather progress to the next interesting story beat rather than go out of my way to retrieve an ultimately unneeded collectable. 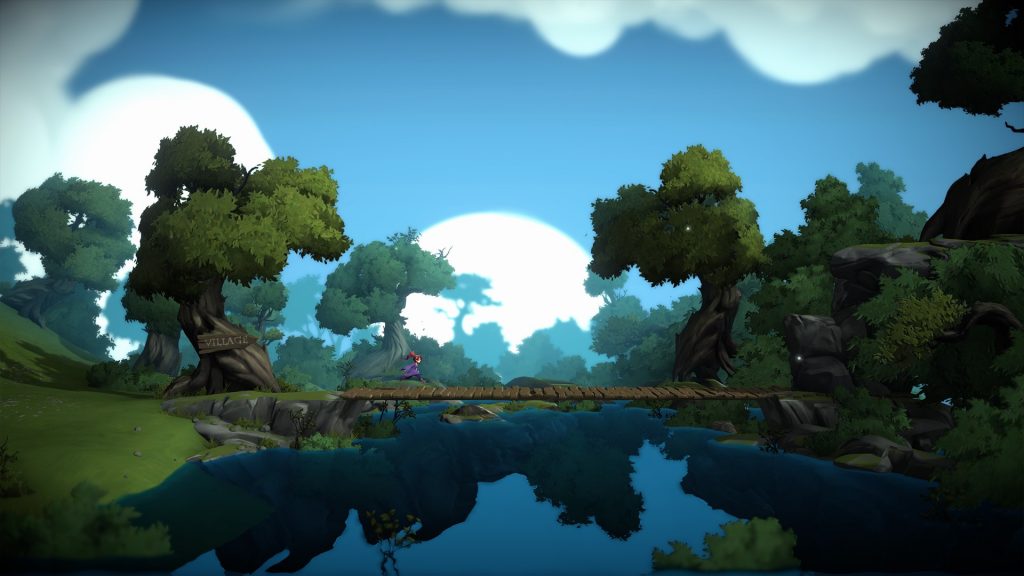 Though the game’s trailers focus more on Izzy’s fantasy story, I enjoyed playing through her journal entries far more. Once I had abandoned the hope of interesting platforming and saw the gameplay more as a means to communicate the story, the journal entries tell a more intimate, vulnerable tale than its fantasy counterpart. I appreciated how the two worlds coincided, but I was far more interested in Izzy’s untamed reactions to the awful things happening in her life, rather than a more internalized version of them in Estoria.

Upon reaching Lost Word’s conclusion, I wasn’t quite sure who the game’s intended audience was. Yes, it is through the eyes of a young girl, and the platforming is approachable for newer gamers, but the story hits unexpectedly hard, and the emotions on display might be too difficult to comprehend for younger children who have never lost a loved one. As an adult, I was quite invested in the story, but unfortunately, not at all in the gameplay. Putting aside the uninteresting platforming, Lost Words: Beyond the Page is a lovely coming of age story, and a beautiful recreation of what its like to feel lost, and ultimately find yourself again. 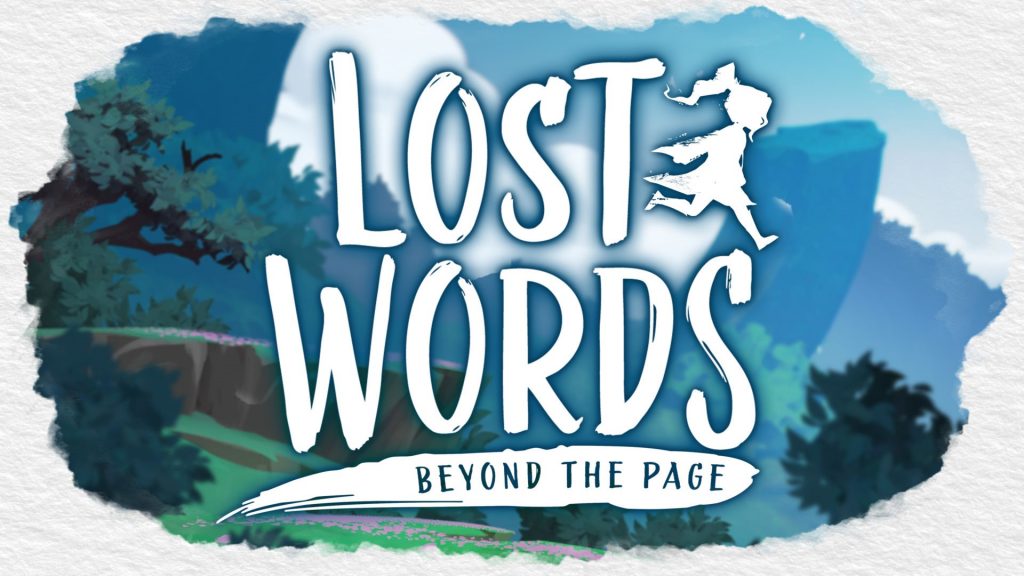