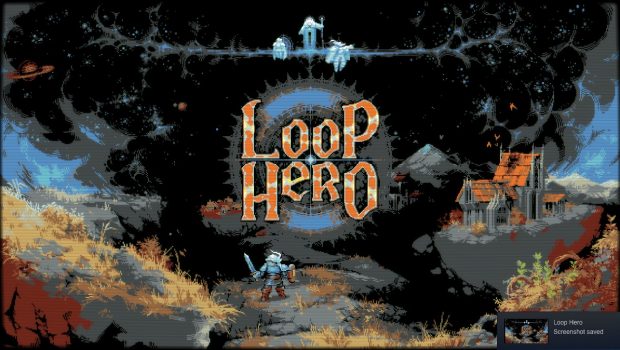 Summary: Loop Hero combines gameplay elements from a multitude of genres to create something special.

I’ve spent the last ten minutes typing and deleting paragraphs that try to explain the concept of Loop Hero without sounding like a gibbering madman. Screenshots of the game don’t do much to explain how it all works, and a gameplay trailer is just as confusing. Over the next few paragraphs I’ll try to paint a clear picture of what Loop Hero is all about, but the main take away from this review should be that Loop Hero is most certainly worth your time, it’s a fantastically unique game. 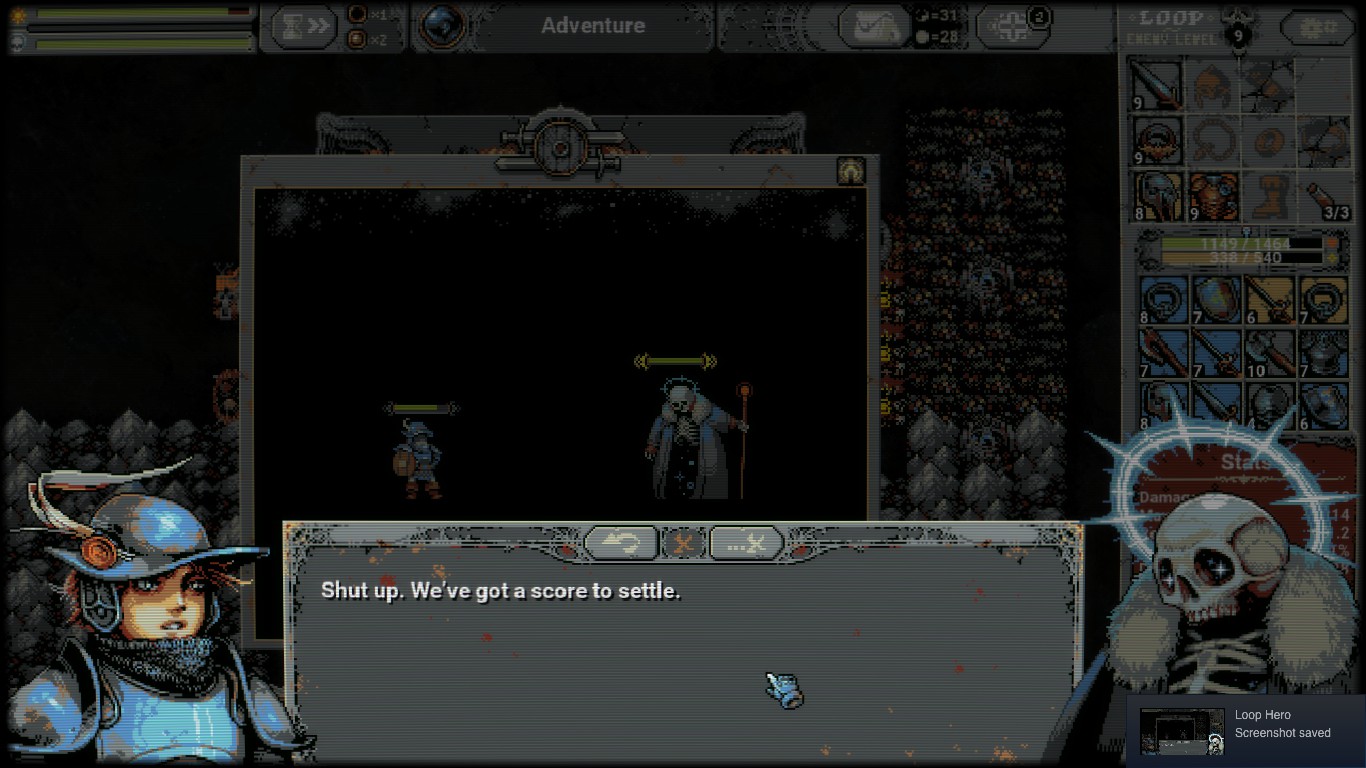 Ask ten different people to describe Loop Hero and you’ll get ten different answers. Some say it’s a deck builder, some say it’s an idle game, others say it’s a rogue-lite RPG. I’d say Loop Hero takes elements from all of these genres (and more) to create a truly unique gameplay experience that looks and sounds impenetrable, but quickly becomes familiar after a few minutes of play time. 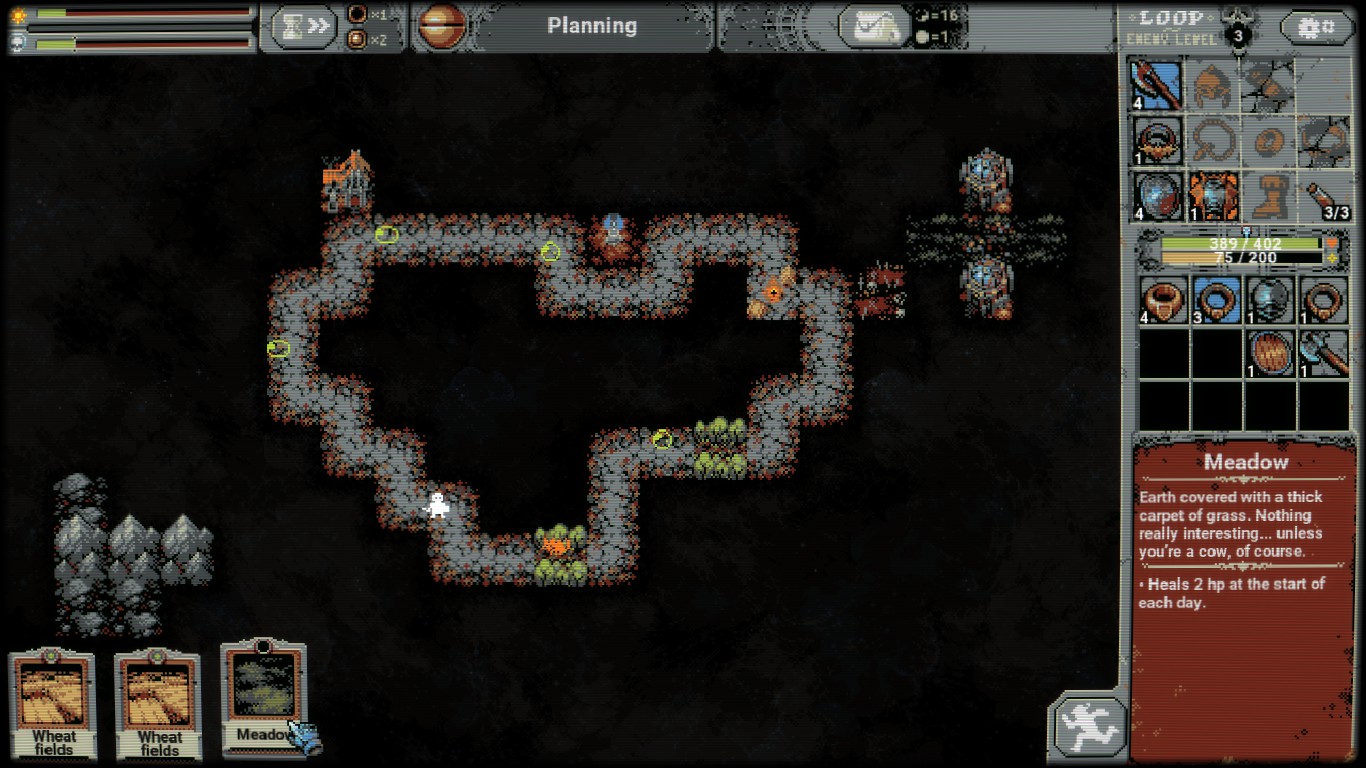 When you start a new run in Loop Hero, a procedurally generated pathway is created to form a large, twisting loop. At first, the loop and the rest of the screen is bare apart from a fireplace and a few small slimes on some sections of the path. Your character then begins to follow this pathway automatically. When the character reaches a slime, the game then pauses and a battle plays out automatically between your character and the enemy, where blows are exchanged until all the enemies have been defeated. Killing enemies rewards the player with experience points, a random assortment of inventory equipment and tile cards. 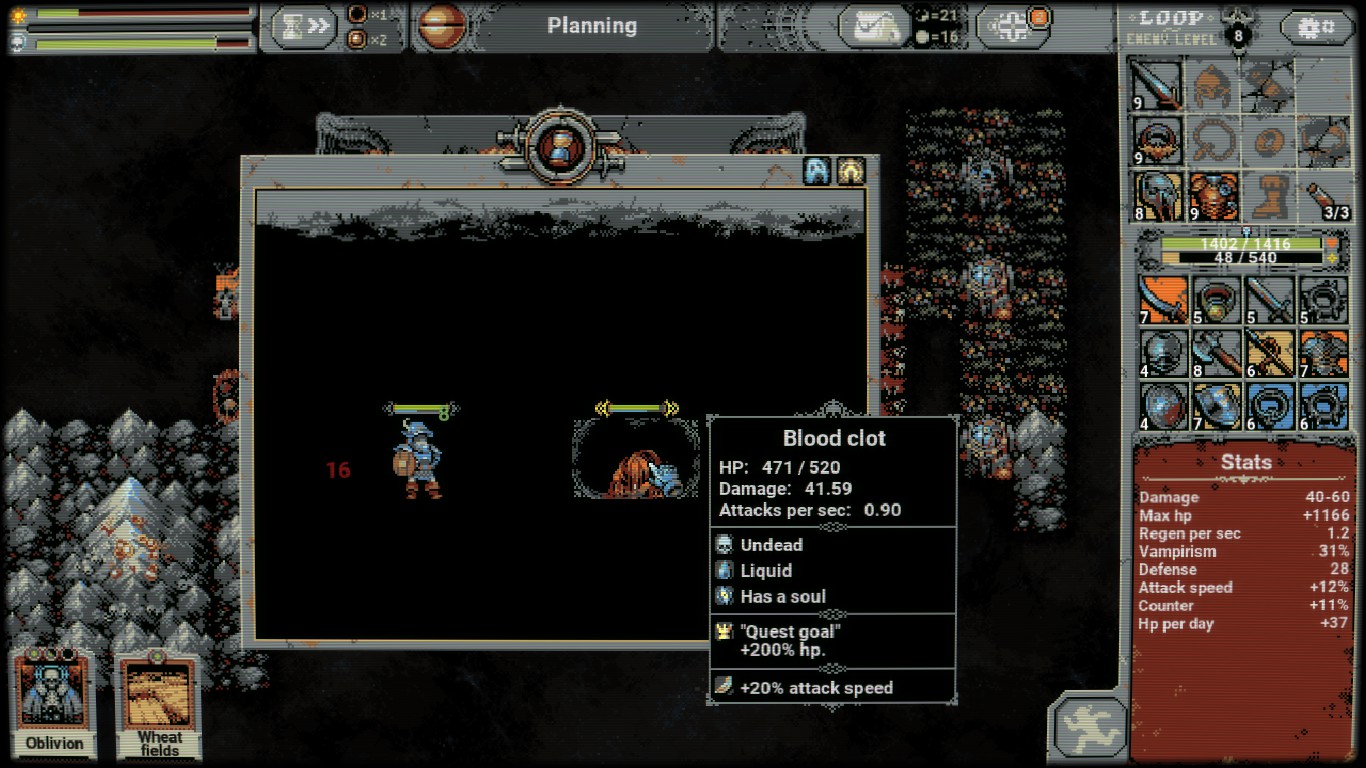 Your character can be outfitted with various equipment items, each with procedurally generated stats. These stats range from simple ‘Max HP’ or ‘Damage’ increases through to ‘Evasion’ and ‘Counter Attack’ bonuses. Equipping your character with different items is the only direct way to influence how battles play out, and forming strategies though various equipment builds will be necessary to defeat tougher enemies or bosses. While there may only be a handful of stats to consider, the customisation potential for different builds and strategies is immense and allows you to tweak your character to overcome the specific challenges that lay ahead. 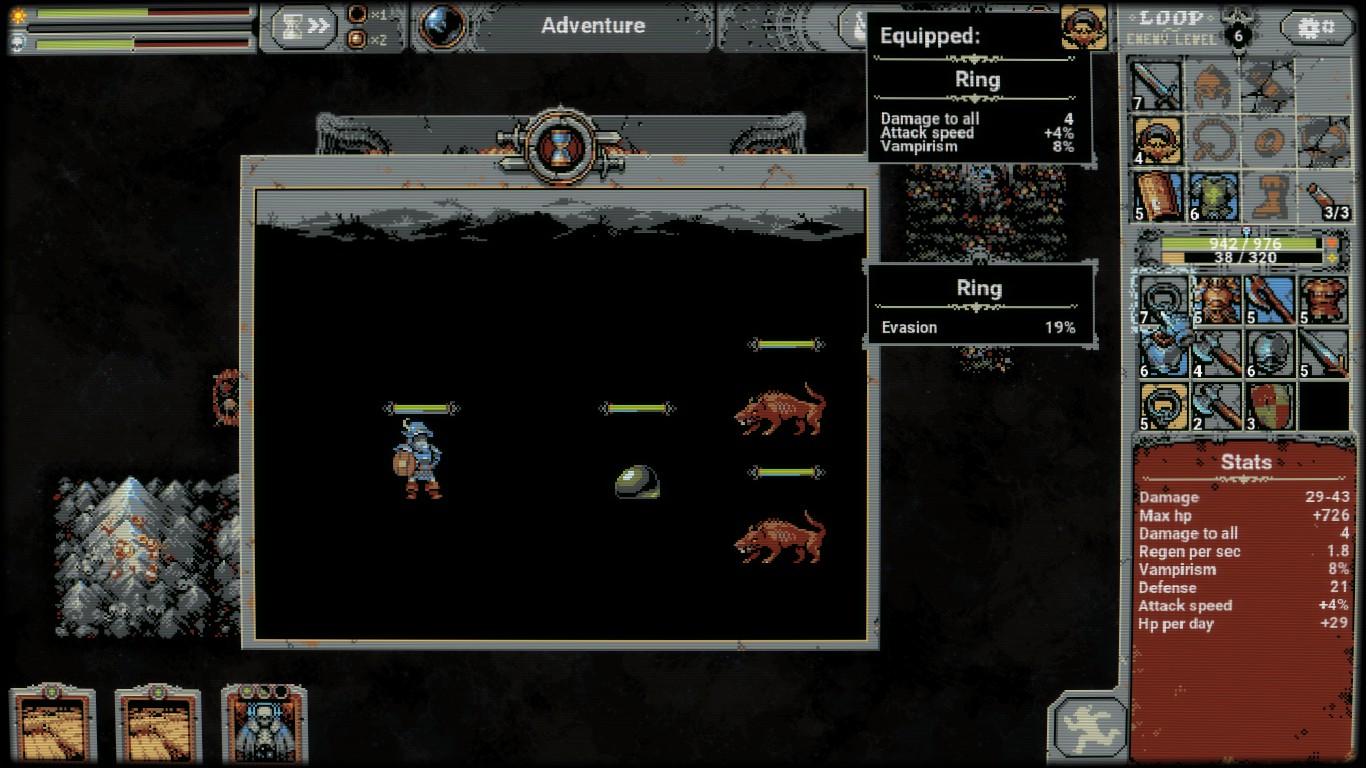 Tile cards can be placed on or around the path and have a multitude of effects. Some tile cards such as the ‘Grove’, spawn new enemies that the hero will have to fight when they reach them on the path. Other cards provide passive bonuses simply by placing them somewhere on the screen. The ‘Mountain’ for example, provides a bonus to the characters HP, whereas the ‘Meadow’ provides extra healing points at the start of a new day. 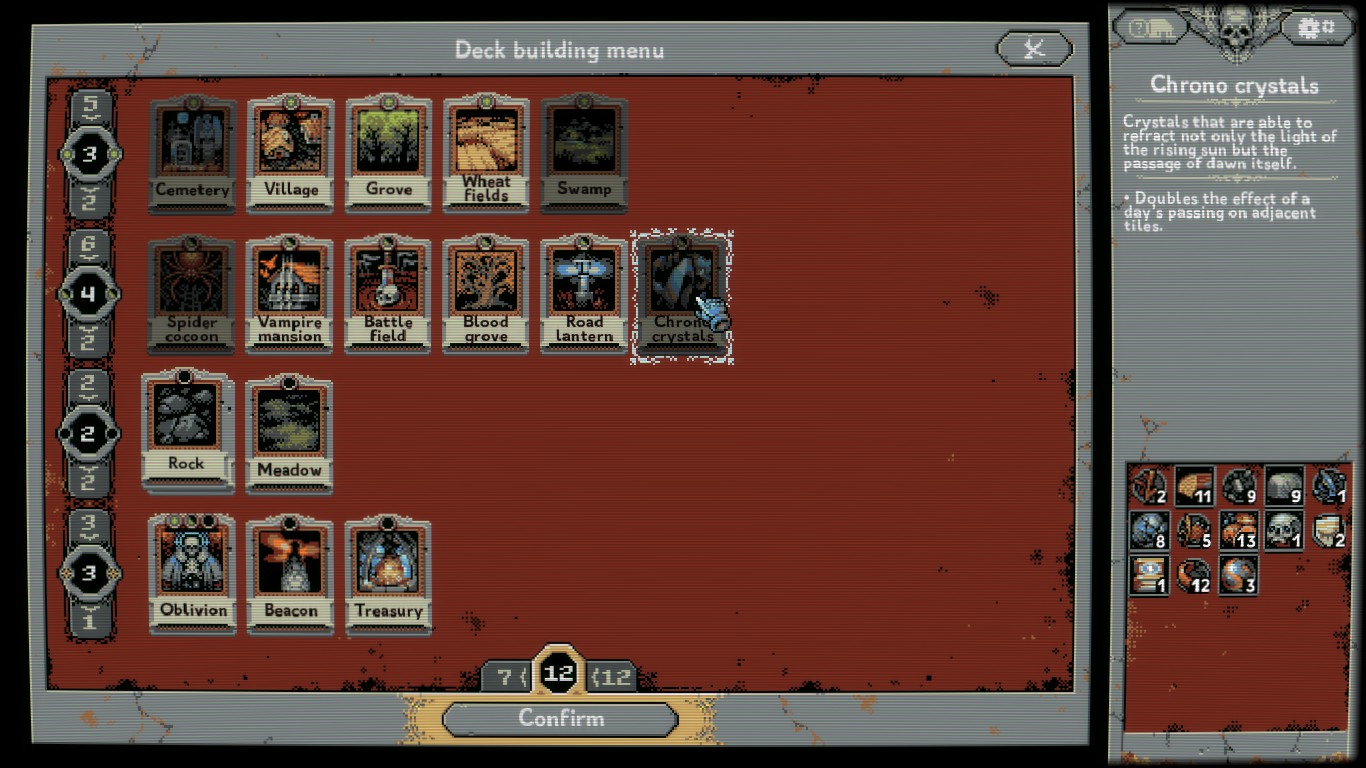 Placing these tile cards also provides resources that are used to build and expand your camp. The camp is an interactive meta layer that unlocks new abilities and tile cards as you upgrade and expand your camp with collected resources. Upgrading the camp will be necessary to unlock different classes and abilities to help in your runs, such as allowing you to create and use potions. If you are slain by an enemy, you’ll keep 30% of the resources you’ve collected in a run. If you make it all the way around the loop back to your campfire, you can keep all the resources you’ve gathered, or if you simply want to tap out at any point you can keep 60% of your resources. I particularly appreciate this system as it motivates the player to experiment with different builds and try new things, and if you die you’ll still keep some resources ensuring that your experimental run wasn’t a complete waste of time. 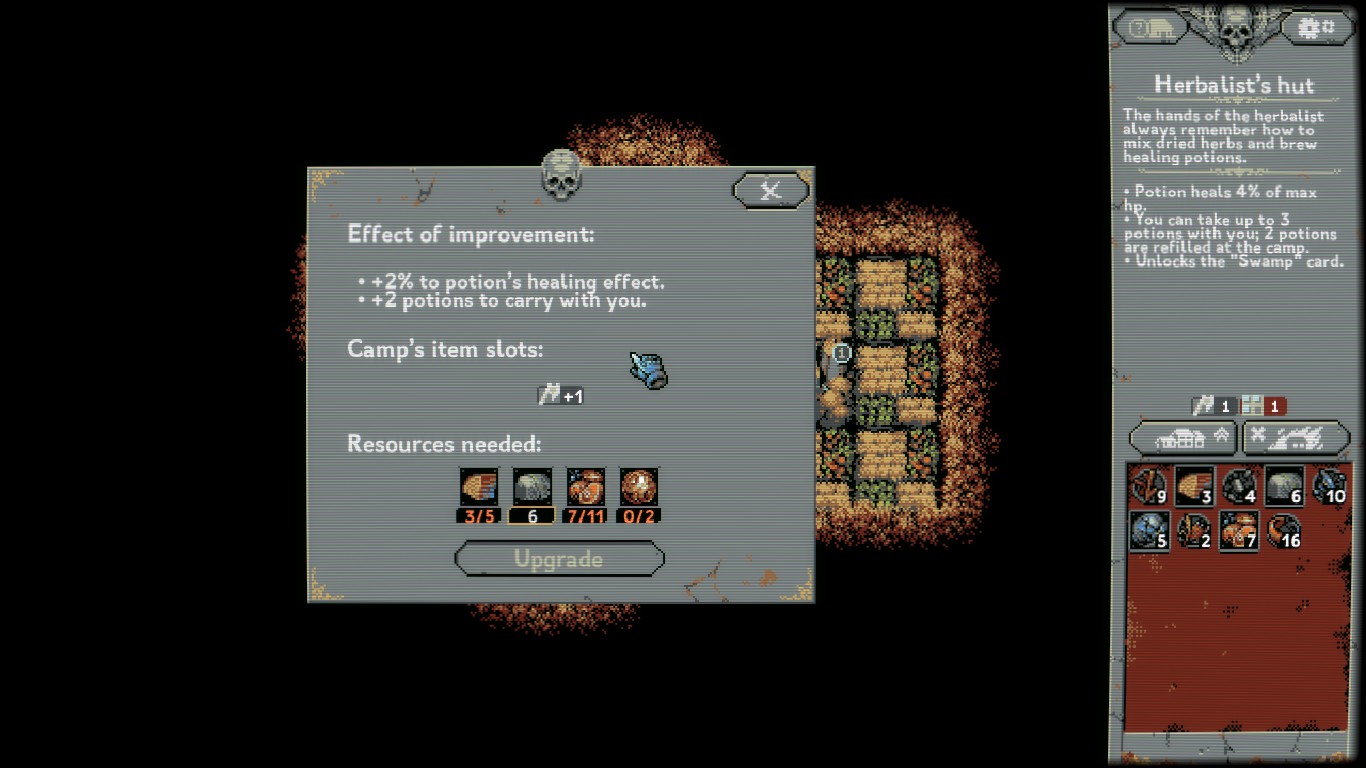 The barebones gameplay systems in Loop Hero are unique and fun enough on their own, but what really makes Loop Hero great is in the way these various mechanics interact, often in hidden and unexpected ways. A great example of this is when you place a ‘Rock’ tile card down, you’ll gain an extra 2HP for every rock that is adjacent to it. If you place nine ‘Rock’ tiles in a 3×3 grid, it will transform into a ‘Peak’, providing a huge boost to health. The flipside of this is that ‘Peak’s spawn Harpies on the loop, so this boost in health now comes with extra challenge for your character. There’s a huge amount of experimentation and customisation in these tile placement interactions, and discovering these various mechanics is both satisfying and exciting. 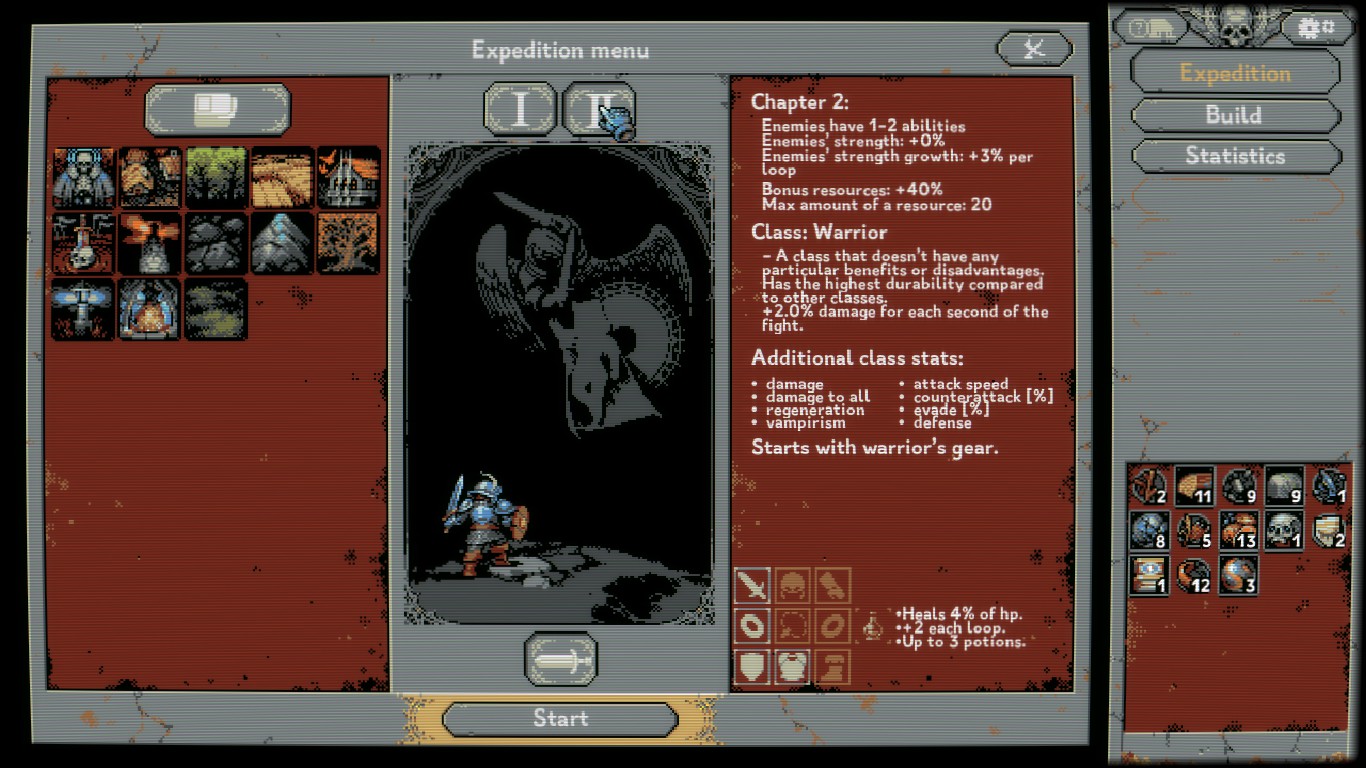 Loop Hero uses an incredible pixel art aesthetic that seems like it was taken straight from the golden era of DOS games. Everything from the colour palette through to the UI design has an absolutely gorgeous retro pixel art design that makes Loop Hero feel like a relic that was unearthed from a time capsule. The music is also authentically retro and just as incredible. The moment when the boss spawns on the loop and the background music flips from meandering, daunting chiptunes into a hectic electro chiptune ballad is always incredible. 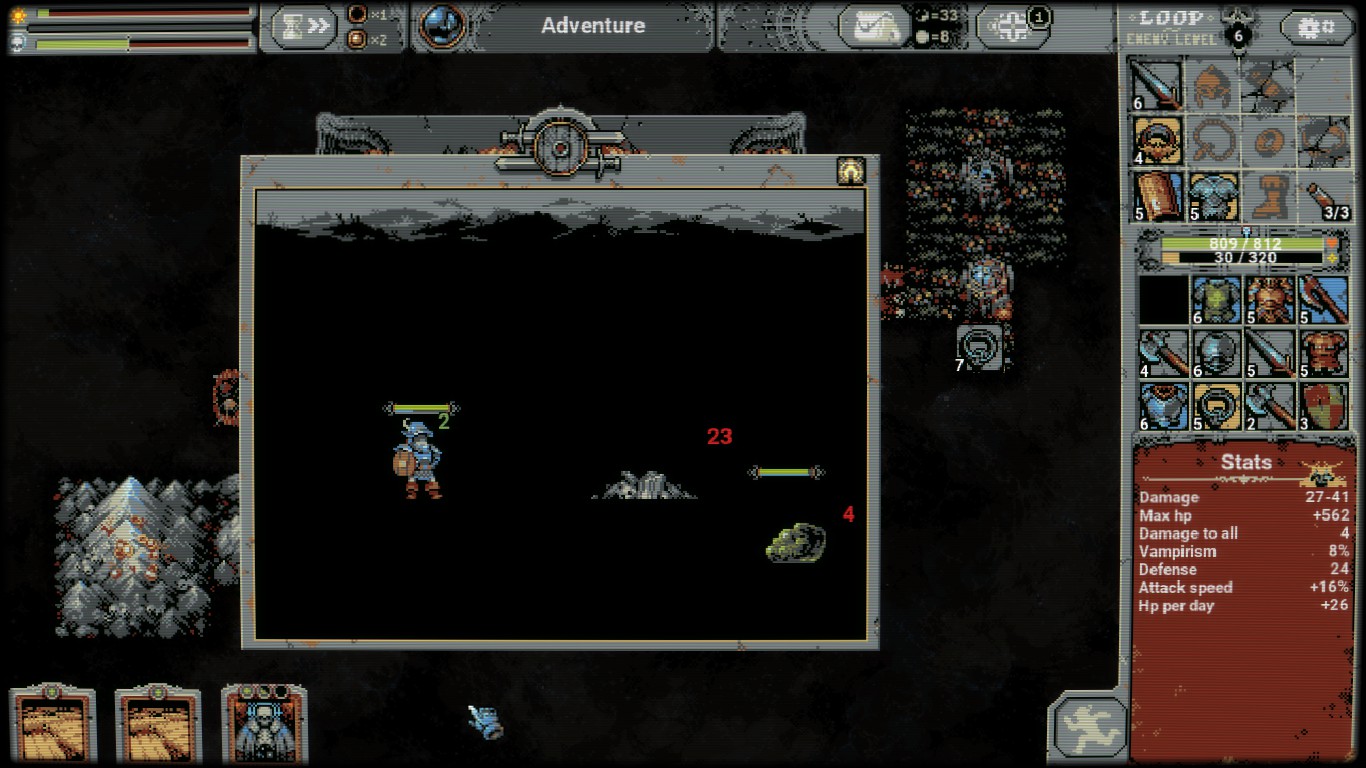 Loop Hero is a textbook example of how a strong singular vision can create something truly incredible. It’s a game that is unlike anything I’ve played before and has occupied every spare thought I’ve had since I began. It’s unique gameplay blends many familiar mechanics from a variety of gameplay genres to create an exceptionally satisfying and compelling experience. The fantastic visuals and audio design masterfully complement the gameplay mechanics to feel like an authentically retro product with modern sensibilities. Do yourself a favour and check this one out. 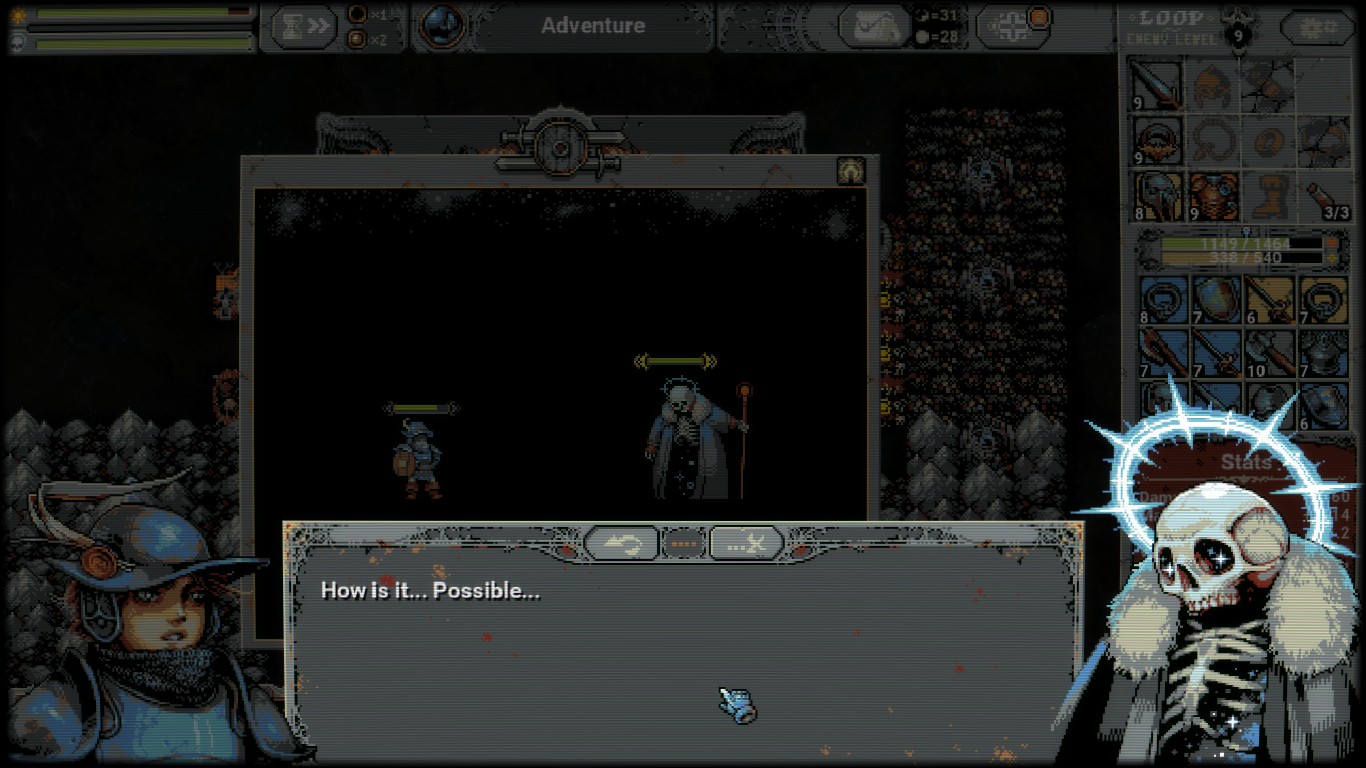 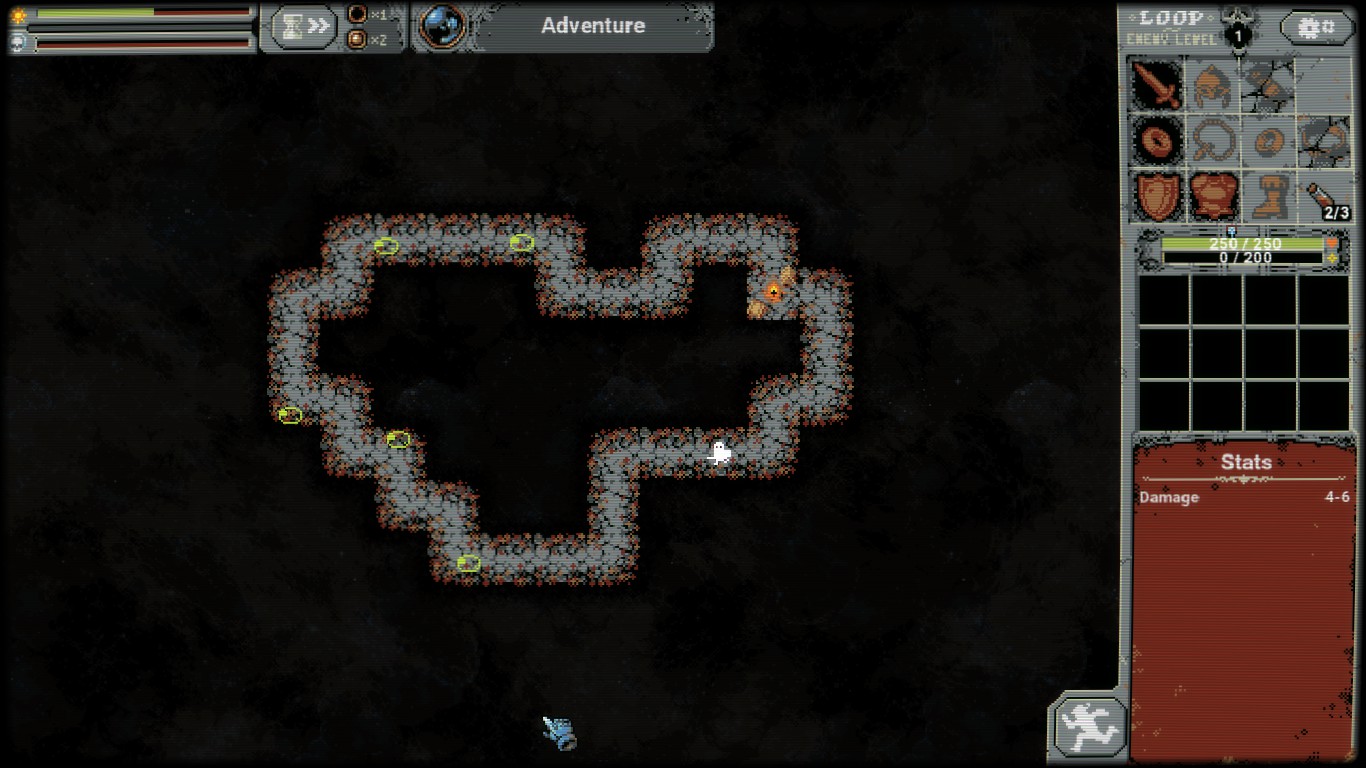