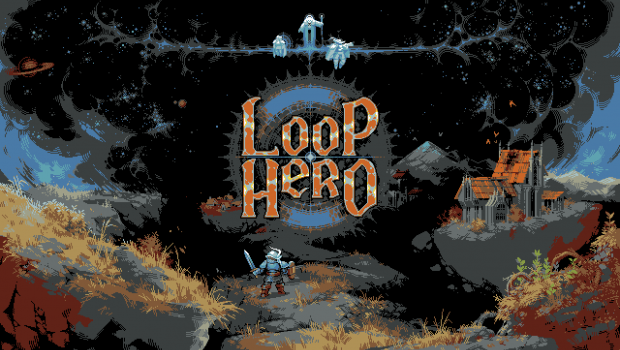 Over the holiday break I spent some time with Loop Hero, a retro dungeon crawler that invokes heavy Diablo vibes if Diablo was made on a Commodore 64. Of course, being a Roguelike in 2021, it also includes a deck building element that is quite a lot of fun, and within my first hour of this lofi adventure, my reservations about its visual design quickly melted away as I became one with the loop.

Loop Hero is a rather interesting mish mash of established fantasy lore, however the folks over at Four Quarters are poking at the frayed edges to add their own flavor. Our hero has been sent into a timeless void, unable to remember the world that was before, or how it ended up to be this way. They set forth on a never ending loop, slaying slimes, the undead, goblins, vampires, and other beasties as they gather resources, and march ever closer towards the boss encounter. The publisher Devolver Digital specifically asked press to be vague about the story, but what little I have uncovered in the opening hours of this build is interesting, and is leaving me wondering exactly how this world came to be. Let’s just say that Loop Hero seems to be poking at those tropes and injecting some interesting flavor, but how that pans out remains to be seen, but suffice to say I’m optimistic?

As much as I want to really like games like Dwarf Fortress, I have been unable to get over the lack of graphical representation hurdle. I don’t need games to deliver phenomenal visuals at every turn, but personally I need something to get excited about, and when I saw this white boney boy rolling around the screen, I was really worried. Match that with this mash of grey and brown and that ugly retro font, and I wasn’t initially really jazzed to be playing Loop Hero. It’s definitely calling back to a certain gamer, and I am not one of those gamers, so for me it just feels bland and kind of hard to parse. We’ll talk about that in a bit though.

The Loop of Loop Hero is quite simply that, a loop. Every time you go on expedition you are presented with a completely randomized path that loops around on itself. Your hero rolls around said loop, running into beasties on the path which starts an automated attack scene. You defeat the baddies, collect the gear and resources, and continue on your way. Each time you pass your starting campsite, you get a big chunk of health, the enemies level up, and you rinse and repeat.

However, as you slaughter your foes you also retrieve cards which you can use to build out your loop, placing structures to make your loop harder, but also offering up greater rewards. Dropping down a Grove for instance will spawn a ratwolf every 2 days, and the Vampire Manor will spawn a deadly Vamp in all encounters that take place in adjacent spaces. Learning how these enemy spawns work in concert with one another is pretty important, but what’s even more important are the helpful structures. Things like the road lantern. that will prevent the maximum enemy spawn becoming out of control, or treasuries that will grant huge resource bonuses if you surround them with other structures. Everything about Loop Hero comes down to risk, reward, and mitigation of damage. It takes a while to really grasp this, but once you work out what works well together, the temptation of placing just another spider cocoon down will often lead to chaos. There also seems to be hidden build recipes, which I won’t spoil here, but I found that by placing a certain number of a certain type environmental structure down together caused something entirely surprising to spawn, and a new enemy to boot. I hope there’s more of this in the game, because it was a super cool moment. 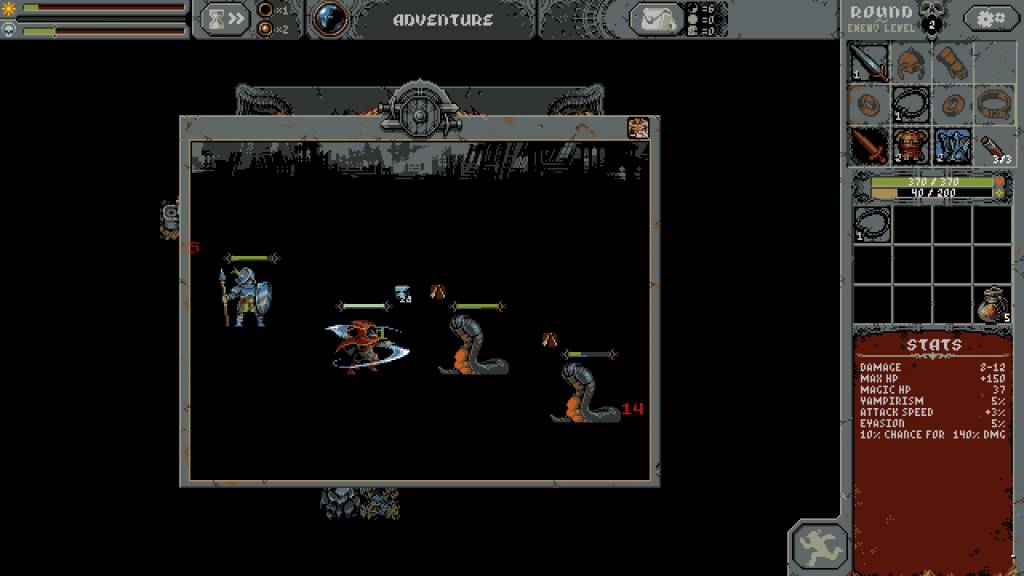 The real chaotic nature of Loop Hero is the constant changing of gear, which is my favorite part of the game. You are collecting pieces of armor and weapons constantly, and you are able to change out your gear instantly, even when in combat, to see immediate results. This means you are constantly reevaluating your build, based on the RNG of the game. Do you want to stack items that offer huge attack speed buffs? But a level 7 long sword just dropped and it offers 8 points of vampirism and you are running low on health. The enemy spawns are now dishing out multiple enemies on each encounter, so maybe you should take that lower level breastplate, but it has a higher damage to all rating. Unlike other RPGs where you are often locking yourself into a path, Loop Hero demands that you adjust on the fly, according to your situation, and that’s super rad.

Yet, that spaced out, retro font and constant flow of information is really hard to keep a track of, even after six hours with the preview build. Thankfully the game has an active Adventure mode, and a paused Planning mode for you to place structures and go through your inventory without the loop continuing, but I’m going to say that the UI design is bad here. The action is happening in the middle of the screen, while the gear is going to the far right, the cards lower on the bottom left, the day/night cycle and your progress towards the boss the top left. Your eyes are constantly darting all around the screen, and it just never seems to have a nice flow.

Despite my issues with the UI, Loop Hero definitely has an aesthetic and the character art is fantastic. Seeing the grotesque vampire, or the menacing goblins, or the lich king himself, it really nails the classic aesthetic they are going for. It kind of reminds me of Shovel Knight, which is really high praise because that main character pixel art is really memorable.

Your run around the loop can end in a few ways. You can retreat at any time, but if you do so at your campsite tile you will keep all of the resources you have looted so far. If you try to retreat away from the camp, you get to keep 60% of your loot, and if you die you only get 30%. After the end of an expedition you are taken to your camp where you can build a huge amount of upgrades, some of which unlock new character classes, others will grant bonuses for your subsequent runs, and there’s A LOT to build here, all of which looks to have some serious depth. I didn’t manage to unlock the next class, despite dropping six or so hours into the game, and it seems like certain classes have access to certain types of gear that my starting warrior class didn’t. I’m definitely keen to see what else is hidden in here.

Then there’s the deckbuilding side, which seems to be pretty easy for people who haven’t played the genre before. There are a series of rows, each with their own specific types of cards. The game tells you the minimum amount and maximum amount of each row type your deck can have, and then you slam things together before venturing out. I collected a few newer cards which added some interesting new options of my subsequent runs, but once again my choices were all based on mitigating risk, while maximizing reward, which is obviously the central theme of the design here.

Loop Hero is really shaping up to be something pretty unique, smashing together the dungeon crawlers of old , with a competent deck builder that plays with a building mechanic, and a lore that seems to be doing something fairly interesting. I’m not going to lie, when I booted this up for the first time I was very apprehensive, but now I’m absolutely ITCHING for a release date, so I can go ahead and dump a good sixty hours into uncovering all of its secrets, and restoring the world to its former glory. Loop Hero is pretty great so far, and I’d highly recommend adding this to your watch list for 2021.