In terms of execution, romantic comedies are a conundrum. Compared to other genres (and oddly enough, the action genre), it has received the most criticism. While people immerse themselves into the fantasy of the rom-com, others criticise it for its lack of realism and plausibility.

Case in point, director Jonathan Levine’s rom-com Long Shot. The pairing of Seth Rogen and Charlize Theron is an unbelievable proposition to consider and the film milks it for all it is worth. Is it possible to make an entertaining and plausible film out of this premise, and, considering the talent involved, a film that is both compellingly romantic and funny?

Seth Rogen returns to romantic comedies that have the conceit that he can be romantically entangled with strikingly beautiful women. Katherine Heigl in Knocked Up (2007), Amber Heard in The Pineapple Express (2008), and Collette Wolfe in Observe and Report (2009) were previous examples of this partnership. Are audiences today still up for it?

Charlize Theron has resisted rom-coms (despite showing some hints in A Million Ways To Die In The West, 2014) and possesses underappreciated comedic chops that are rarely showcased (Young Adult and Tully proved this). Will Long Shot be a perfect springboard for them?

Director Jonathan Levine has worked in the romantic comedy genre before, thanks to his zombie rom-com Warm Bodies (2013), and has made many good comedies including The Wackness (2008), 50/50 (2011) and The Night Before (2015). His last film, Snatched (2017), was a major step down for all involved, including Amy Schumer. Will Long Shot be his return to form?

Seth Rogen stars as Fred Flarsky. He is a talented and acerbic journalist, who revels in escapades that expose world issues and border on controversial. He quits his job (hilariously out of spite and pride) due to his place of business being bought out by a large media conglomerate, owned by media mogul Parker Wembley (Andy Serkis, donning makeup). 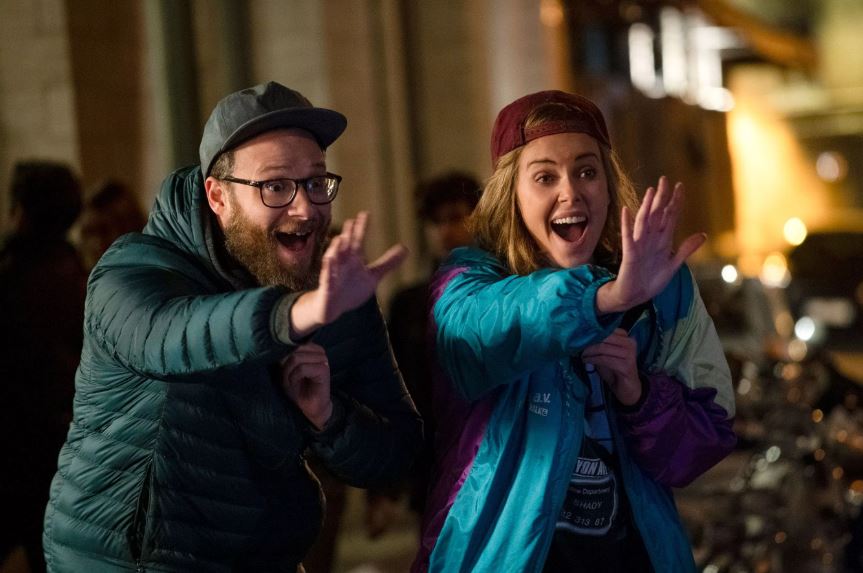 Theron stars as Charlotte Field who is the US Secretary of State and one of the most influential women in the world. In wanting to make a positive difference in the world, she prepares to make a run for the Presidency. When Fred unexpectedly reconnects with Charlotte, past memories of the two come flooding back and positive impressions are made (despite a very violent fall). The encounter leads to Charlotte impulsively hiring Fred to be her speechwriter, much to the dismay of her trusted advisors (led by Ravi Patel and June Diane Raphael, who is wonderfully passive-aggressive). Sparks fly, leading to a romance that is unbelievable, but not impossible.

All three talents have something to prove to themselves, and, thankfully, Long Shot provides a solid argument for them. It is very entertaining due to its comedic instincts and is also genuinely romantic, a quality attributable to Rogen and Theron’s surprising chemistry. The film works due to the story’s plausibility. Whether it accounts for gender, the perception of government politics, women in the workplace, journalism, social media, or religion, the topics add verisimilitude to the story and lend valuable perspective to the characters and their actions (and lack thereof).

Having such plausibility comes with timely themes. It provides the comedy with punch, particularly when it aims its guns towards politics with sharp, if not entirely subtle, satire. The biggest giveaway is Andy Serkis’ performance as Parker Wembley, who gives a damn funny deconstruction of Steve Bannon and Rupert Murdoch, whilst looking unrecognisable. Unfortunately, the film aims for easy targets too, such as Christianity, drug culture, and Nazis, which results in few comedic rewards. Similarly, the film suffers from over-explaining jokes to the point of ruining them, including a running joke involving a tattoo, and some of the raunchiness is misplaced. 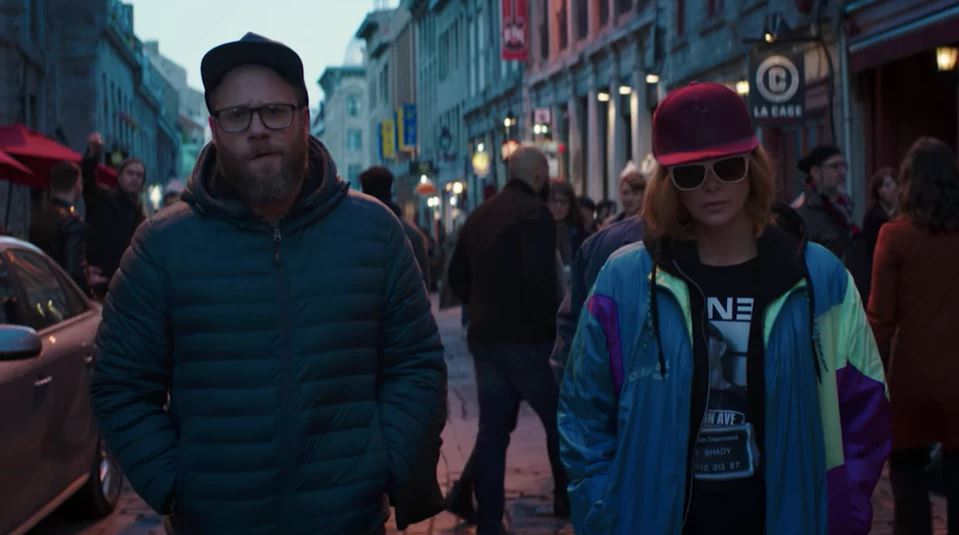 Where the film excels is in its romance. Ever since Knocked Up, people have been meant to chuckle at the supposed implausibility of a premise where a short, stocky stoner woos a beautiful, successful, professionally ambitious woman. In Long Shot, the revamped premise is stretched to breaking point, but thanks to the chemistry of the leads and the strong script (by Dan Sterling and Liz Hannah), the romance succeeds.

It helps that the characterisations are strong and the rom-com tropes are subverted to adhere to the realism of said timely story. It avoids the tired trope of forcing a woman to decide between her job and her relationship or how even the slightest amount of emotion can deem a woman to be hysterical in the media’s eyes. Even the easy targets of the comedy add to the character arcs in a covert manner that is surprising, such as when Flarsky discovers a secret from his best friend Lance (played enthusiastically by O’Shea Jackson Jr.).

Seth Rogen still plays the stock personality that he has thoroughly explored over the past fifteen years. While it did play out during his career insurgence due to overexposure, Rogen has it down to an art form and it is still an entertaining and amusingly down-to-earth performance. Under Levine’s guiding direction and the strong script, the usual character traits that Rogen adheres to (the drug culture in particular) adds to the characterisation, giving Flarsky a down‑to‑earth feel. 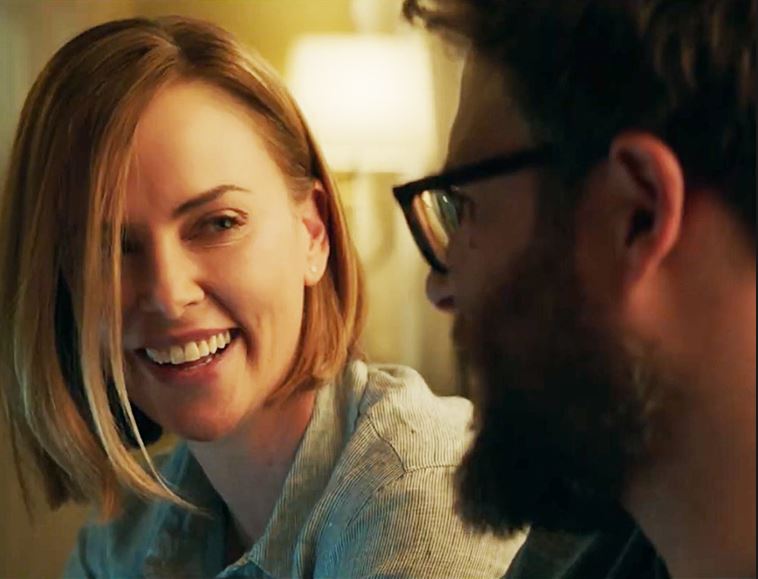 Rogen steps up his game (as one should) when he works alongside Theron, particularly when in their dramatic and romantic scenes. He also convinces as he becomes more understated and intimate. The performance may not be a complete revelation ala Adam Sandler in Punch Drunk Love (2002), but it is in the same ballpark.

Charlize Theron has always been a great actress who commits to the material, regardless of its quality. In recent years, she has successfully integrated into more genre fare with hits including Mad Max: Fury Road (2015), Kubo and the Two Strings (2016), The Fate of the Furious (2017), and Atomic Blonde (2017). Venturing into rom-com territory, Theron nails her part as Charlotte. She exercises her comedic chops and has the best comedic set piece all to herself, which involves negotiating with terrorists.

The script also gives Charlotte a strong sense of agency. She is not a puppet to be controlled nor eye candy to be leered at, but someone who excels at her job, knows what she wants in a relationship, and will do her darnedest to get it. Theron’s chemistry with Rogen also works. During the scene where their characters meet, there’s a spark of intimacy, awkwardness and familiarity that lights up, and once the audience notices it, they are immersed and a true romantic feeling flows on the screen. 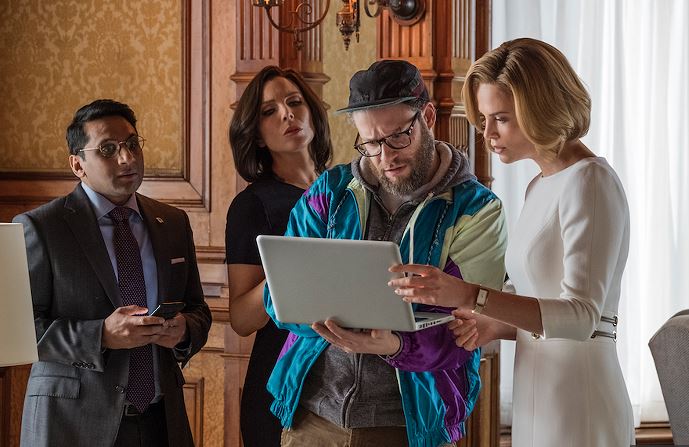 Long Shot is a success in the polls. It may not win in a landslide due to some of its comedic instincts, but it works when it counts, thanks to Jonathan Levine’s assured directorial hand, committed performances by Rogen and Theron, a stronger than expected script, and a romance that is genuinely romantic and affectionately heartfelt. Recommended.

Summary: Long Shot is a success in the polls. It is very entertaining due to its comedic instincts and is also genuinely romantic, a quality attributable to Rogen and Theron’s surprising chemistry.