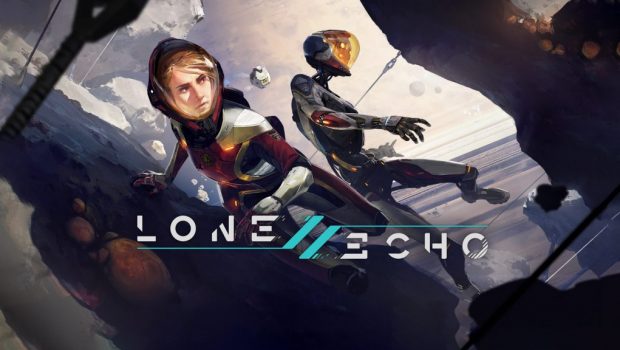 Summary: Lone Echo II has made us wait long enough for it to get here. Now let's go into reaches of space that we may not come back from!

Lone Echo was one of those releases that really got what the VR platform could be capable of, thrusting the player in the middle of an incredible story and in fantastic places that, even though you could get a bit motion sick from…truly was and is a spectacular experience.

Lone Echo II has a lot to live up to, and does not disappoint.

If you played the first Lone Echo then you know the premise of Lone Echo II and pick up where the first game left off.

Back in deep in outer space with gut wrenching movements as your poor brain tries to reconcile that you are not actually moving in a weightless environment. 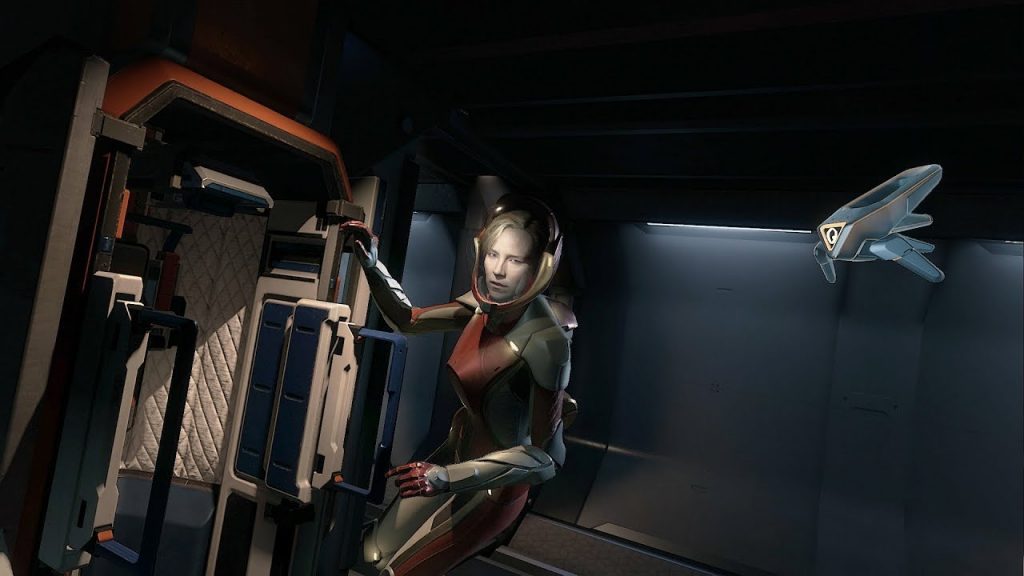 To fight off any motion sickness, I would suggest playing the game in small chunks. 20 to 30 minutes intervals.

If you have the Beta Airlink activated in your Oculus account, you can pair your computer up with your Oculus Quest 2. The headset and computer just have to be on the same network.

On the Oculus account, go into setting and activate the option in the Beta options. Interesting fact, the airlink turns itself off if not used for 24 hours. Therefore, you may have to go in and turn it on again.

It is well worth the experience to be untethered from your computer.

Now onto your adventure in Lone Echo II. 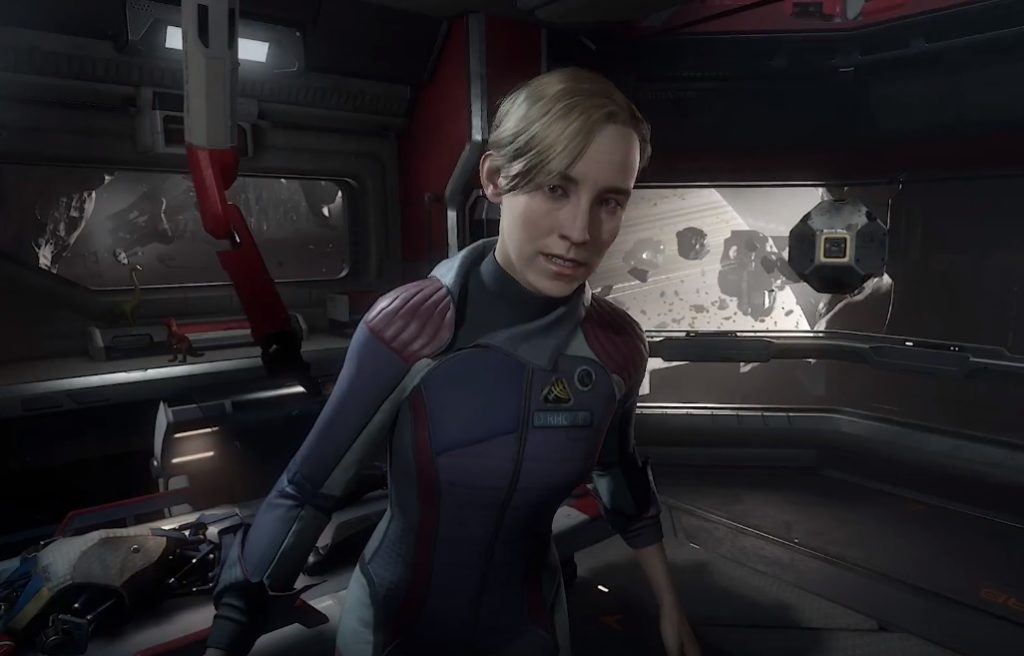 You play as Jack, an android stationed at a facility in deep space. The human, Jack is with is Captain Liv Rhodes.

By the final part of the first game adventure, things deteriorated for them. Now finding themselves 400 years into the future as they orbit Saturn in an abandoned space station. Captain Rhodes repairs Jack some three months later and reinitializes him, and this is where your adventure begins.

Storywriters Cory Lanham and Ru Weerasuriva constructed a tale with a major motion picture in mind it seems. Though at times pacing can be a bit, slow for those that want to get right to it. 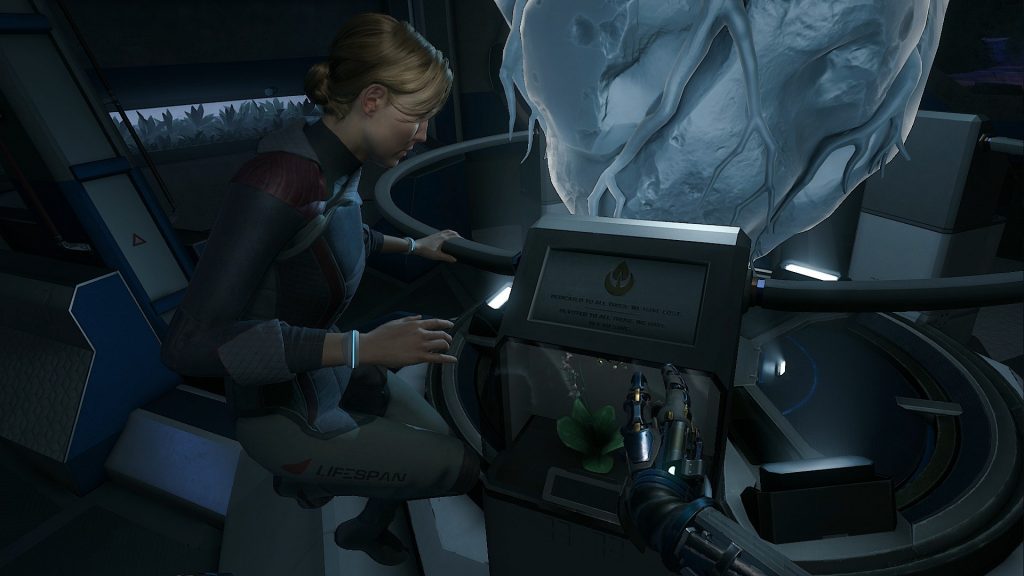 However, patience has its own rewards when it comes to the adventure. Being in VR is perfect for it, because YOU the player are part of a well-constructed novel, or major motion picture. The real experience and feeling of being part of events is not based in any kind of action set pieces alone. More like the interaction of characters and the sometimes-menial things that have to be done in the environment. However, really, who would want to cut such a deep experience short by cutting to the chase too quickly?

Ru Weerasuriva pulls double duty as writer and director, painting the adventure more in tune to his writing vision. How things progress and how things reveal are truly epic story telling fashion. Even if you have not played the first game, the player is caught up to events by character dialogue and it does not feel like a rushed shoe horned in story telling at all. 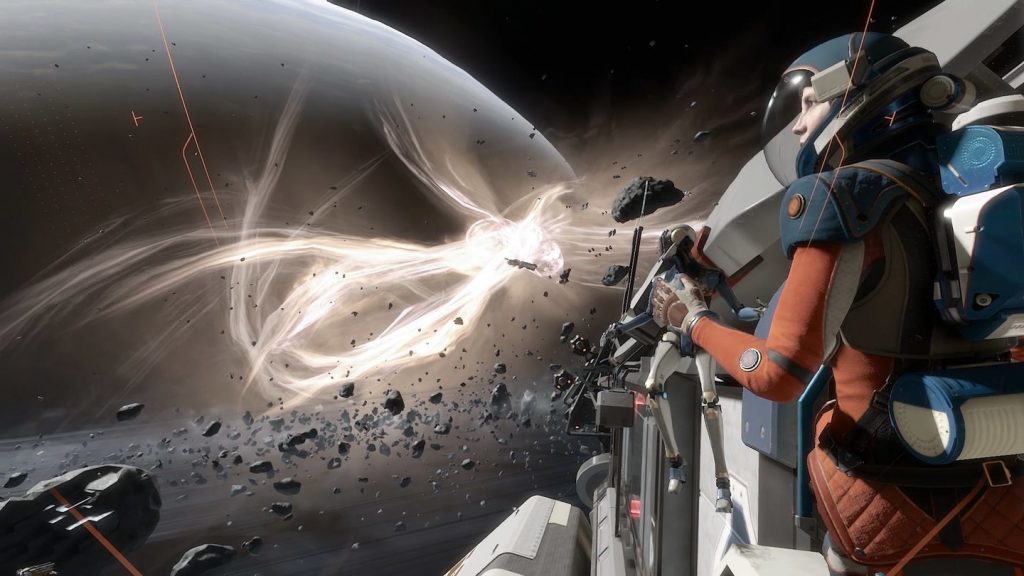 Directorially what is shown and how it is shown in a film or in this case, a visual game can aid or hinder the experience. Game reveals are subtle and paced in logical order and never in such a way as to feel unnatural. It all feeds into the experience. Like for instance, the moment the outer window shields are open to show us where we are is incredibly awesome. Meant to make us feel very small in a very big outer space world that we as the player are part of, mission successful there.

This all combined will make you want to check out the first game, just to experience the events that led up to part two. Even if you play them out of order.

Of course, now the player, as Jack the android must get right to business at hand in trying to assist Captain Rhodes with finding a solution to their situation.

Getting around in the zero-G is not always all it is cracked up to be. I learned this in my review and play through of the VR game Adrift.  The same difficulties are here in the Lone Echo game as well. Now this is not a pit fall or bad design, it is what we see in a real Zero-G environment in the real world as well.

Therefore, here in Lone Echo II getting around can be a chore.  The player has to grab hold of various objects, pull, and push himself or herself along. Alternatively, they can use little wrist thrusters to aid in locomotion. However, the wrist thrusters have limited charges and have to recharge if used up. The recharge rate is fast though so thank goodness for that.

I just found it to be difficult and at times frustrating. Though I did manage to get around somewhat. More often than not, I ended up bouncing off and floating in a wrong direction. Practice does not make perfect, but I did get better. It has been a while since I last visited a Zero –G environment in a game after all.

I did find that using both hands and pushing away from an object in unison often got me the results of forward motion that I wanted.

Gameplay, in Lone Echo II once again keeps things based in puzzle solving.  Of course making full use of the VR environment with interactions with items in the game world is the primary way to do it.

To aid Jack in the interactions needed, he has all the bells and whistles one would expect a service android to have in order for them to function at the various jobs they are called to do. Not only are there the maneuvering thrusters on the wrists, and a scanning tool, there is also a cutting tool and flash light. 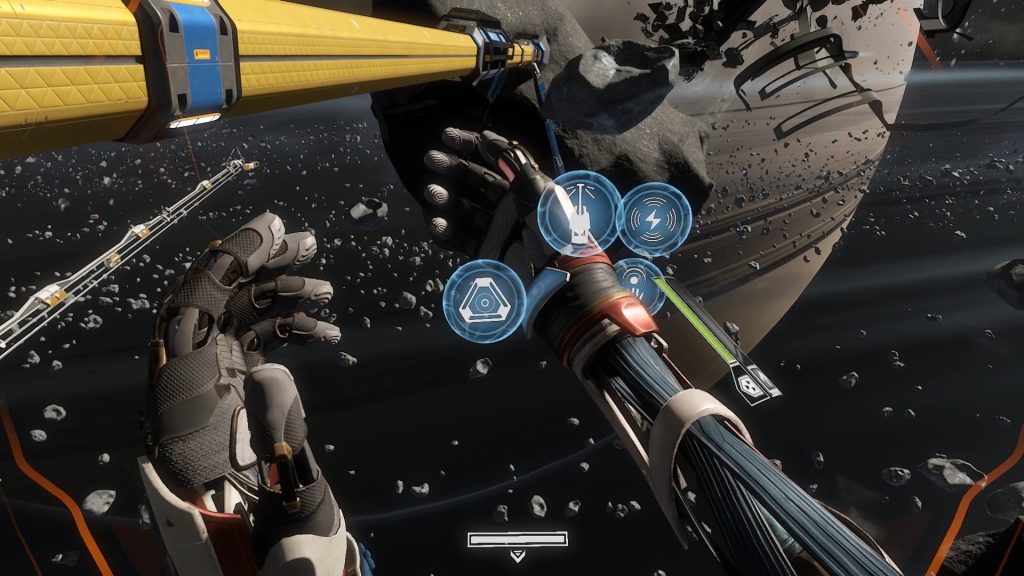 There are enemies that are in Lone Echo II. The strange biomass that was introduced in the first game is present here.  Here they have evolved somehow into little masses with wiggly tentacles.  Attracted to power sources, which they seem to thrive. So even one of them attacking the player (Jack) can find them quickly losing shields and then all their power energy.

Avoidance or distracting them somehow is the safest course of action. You can do this by finding equipment to power on and thus drawing their attention. Rerouting power is all part of this as the player works out how to do that exactly. The cutting tool comes in handy opening up power relay panels. You will find yourself doing this more than a couple of times to figure out a situation.

While the biomass and the little tentacle globs are weird and at times interesting, the game could have done with a few more dangers and tensions sprinkled in there. I mean sure at times if not careful they would bump into you repeatedly as they drain your energy. I never really felt overly panicked about it though. 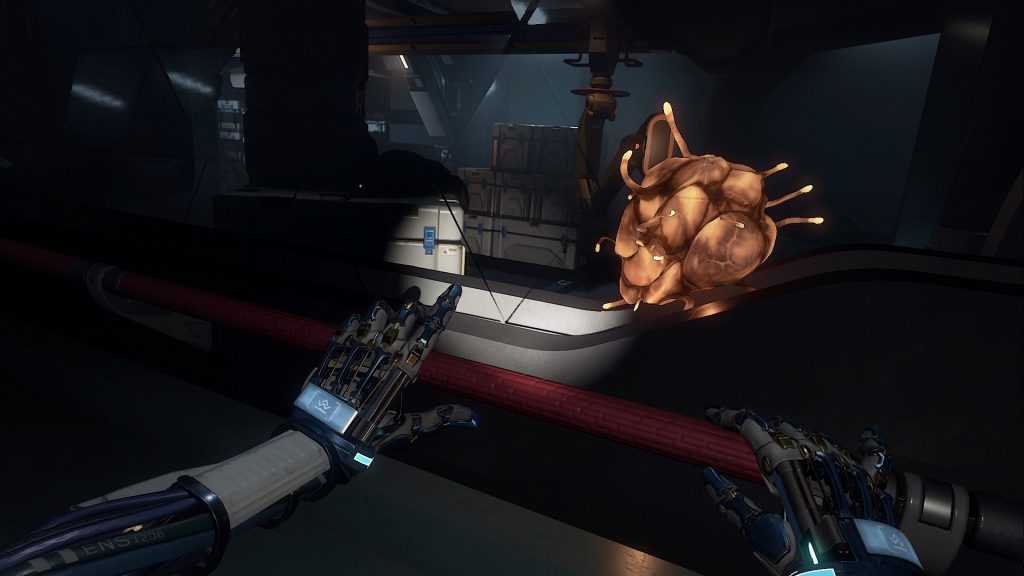 It is all about the immersiveness of this game, and the player is thrust into the story. There is a lot of dialogue between Captain Rhodes and Jack. Some may grow tired of it all.  However, not only is it a plot device to assist in explaining things in an interesting way, it would make sense. Rhodes really has no one else to talk to, so I can see her being a chatterbox and going over things with Jack.

The player as Jack, makes dialogue choices by a handy PDA button. It gives different choices of dialogue at the appropriate times. Pretty much most of the tools and interaction choices are literally all based in and around the player characters hands and wrists.

The level of background in Lone Echo II is true triple A title stuff. The space station is huge and has so much to explore and discover. You actually feel as if there is a history here.  There had been people here and now there are not. 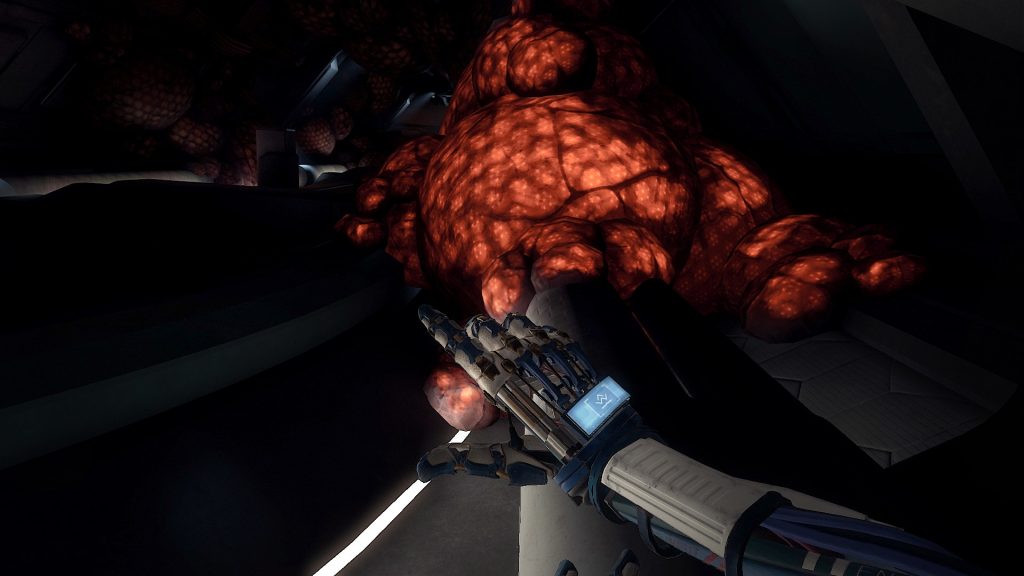 Then of course, there are the voice actors that bring life to the characters. There is a life and breadth of a living person to these characters, which is incredible. Well-delivered lines come forth making you believe in what is happening in front of you.

Wrap it all together with some incredible sounds and spectacular graphics and Lone Echo II is a stellar game.

Just remember your more like doing chores in space than anything else. However, it is one interesting and fun though sometimes frustrating (locomotion) ride.

If you want a first rate game your VR itch, Lone Echo II is necessary game to have in your collection.