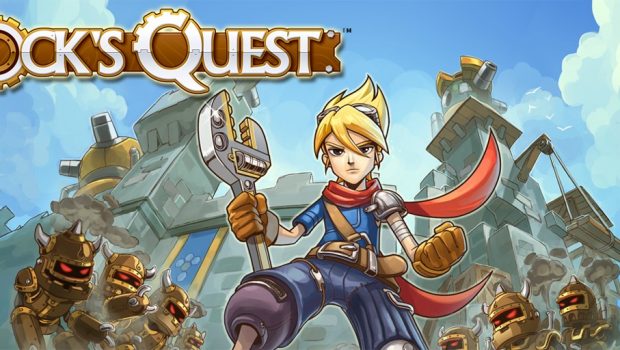 Lock’s Quest coming to PS4™, Xbox One and PC

Vienna, Austria, New York, NY, USA, February 17th 2017; 2008’s Lock’s Quest is the newest entry in THQ Nordic’s MAP (meaningful asset-program). The MAP is THQ Nordic’s internal (game) plan on which IPs to focus mid to long term, but that’s not important right now. Lock’s Quest is one of those hidden gems that will profit from MAP and will be released in April 2017 on PS4™, Xbox One, and Windows PC.

Developer Digital Continue (based in New York City) had to walk a fine line between keeping the visuals and core gameplay of the Nintendo DS, whilst revamping UI, adapting controls, remastering the music, and adding a new progression system which is integrated into the storyline.

“We had the great opportunity to work with people from the original development team of Lock’s Quest, and things clicked right off the bat”, comments Reinhard Pollice, Business and Product Development Director at THQ Nordic. “It is one of those hidden gems and a fan-favourite, so when things fell into place, we quickly decided to do this.”

“I always felt Lock’s Quest deserved a multi-platform release, and it’s exciting to help that vision come to pass all these years later”, added Digital Continue Co-Founder & CEO, Joseph M Tringali. “The incredible pixel style translates well to console, and we were fortunate to include many high-resolution assets that weren’t in the original. It was great to work with a partner like THQ Nordic, who understands and respects the creative process, and was dedicated to both preserving and enhancing this fan favorite.”

In this remastered version of the critically acclaimed 2008 Nintendo DS-Game, you play as Lock, a boy who stumbles upon an invasion of his Village, which triggers a wider war between Kingdom Force and a revived Clockwork Army, led by the nefarious Lord Agony. A gripping story unfolds as you progress through 75 Days of warfare, across a dozen unique maps, aided by a collection of turrets, traps and special attacks. Experience the game as it was meant to be, with a high-quality soundtrack, new high resolution portraits, and revised gameplay.

• Place Kingdom Force units to defend your capitol in a brand new Endless Mode – Antonia Defense!
• Build up your fortifications each day to defend against a timed Clockwork assault. Use dozens of Turrets, Traps and Helpers to stop the advance.
• Adapt your building and battling strategies as you access new materials and as your enemy’s intelligence evolves
• Fight alongside your defenses, using context sensitive Special Attacks, and devastating Super Attacks, which impact a wide range of enemies.
• Unlock the secrets of Kingdom Force and the Archineers via an engrossing story with a multi character cast, told via hand drawn cinematics and cut-scenes.