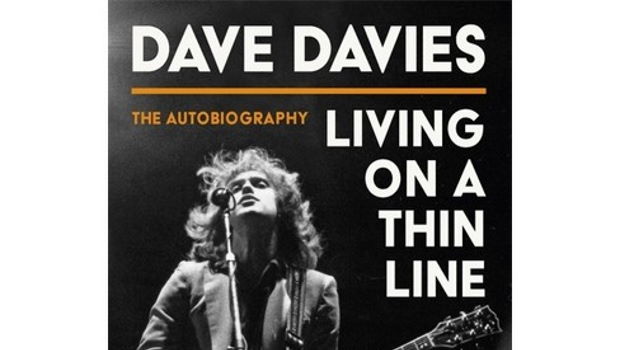 Like many people, I enjoy a number of songs by The Kinks, I also enjoy auto/biographies… so the chance to read Dave Davies autobiography seemed like a great prospect… until I started reading it.

I’ll be clear here and say my knowledge of the man himself and his interests was pretty much zilch going into this… I really only knew of some of the songs and that was about it… so I was unaware of the turmoil around the band dynamics and their issues with touring… I certainly didn’t know about Dave’s other “interests”, but my alarm bells were ringing within the first few pages. In the preface Dave mentions a time in which he spotted an old woman and was apparently overcome with sadness, claiming he could see her entire life unravelling in front of him, her pain and sorrow… he says he wanted to speak to her and do something to make her feel happier. He goes on to say just as he was about to speak to her, another woman greeted her and they both smiled happier and the woman suddenly became radiant and filled with joy… to me this hinted at what I later determined (rightly or wrongly) to be Davies complete lack of awareness for people other than himself… to project his own thoughts and feelings on others regardless of their reality (as evident here by the fact that the woman seems to have not been in a miserable state but was simply waiting for a friend… hardly the harrowing misery Davies projected on her with his vision of her entire life.)

But it’s not just his penchant for Woo, it’s his writing style too. My wife may have hit the nail on the head when she suggested it sounds like he is writing the same way he might recount exploits to someone… ie it lacks structure and simply comes out in whatever manner the memories occur and chronology and a sense of structure be damned. I found many times that I would read a passage, then be presented with something that happened before what I’d just read… or be told of events that occurred at some place then have the setup of what the place is and the meaning it had presented after the fact. If they occurred once or twice it might not be too bad but it’s throughout the whole book.

I did read a comment stating that apparently John Lennon felt Dave Davies was obnoxious and regardless of what you might think of Lennon as an authority on that note… I would have to agree that he seems to be on the money. Dave Davies is open enough to recount the atrocious things he/the band did… defecating in a hotel sink, destroying property and general antagonizing each other (to the point of serious injury in some cases). He makes note at least in one point about how with age he can see how he behaved poorly… but essentially then goes back to blaming those around him for his behaviour (noting in one case that if they had just given him what he wanted, they would have avoided all the trouble… ie he wouldn’t have destroyed their property and acted like a petulant child.). Granted the whole “rock star trashes a hotel” seemed some what par for the course at the height of The Kinks fame… but I think have more of an issue with the fact that he write as though he still thinks it’s other people’s fault that he acted like the very thing he left in a hotel sink.

Not to mention his inconsistency with attitude towards sexual relations and hurting people’s feelings (or perhaps he is consistent and it’s simply down to his inability to write with a sense of chronology). At one point Davies mentions he had no qualms enjoying sexual relations with either sex and would frequently engage in sexual exploits more or less left right and center… but he then noted that he realised the people he was sleeping with would want more than just a fling and so he stopped doing that…. except he didn’t! He continues to mention his sexual exploits without any indication of being clear to his partners that he was only interested in physical connections.

But then there were the women he did have more than a physical connection with. He has the audacity to mention that he “figured” his wife would have known about the “other women” on tour… then explains how she was less than impressed when he told her he wanted to leave her so he could go off with a new woman he met (variations of this event happen a few more times in the book). He presents himself as someone who is always keeping his eye out for a future (to paraphrase Jeff Goldblum in Jurassic Park) “ex-Mrs Davies”… whether he is currently married or not.

Don’t get me started on his views on astrology and Tarot… I mean this is the man who admits to taking hallucinogenics in about the same sentence as saying he had a vision.

I got quite agitated reading Living On A Thin Line… Davies shows no willingness to accept how his actions lead to a lot of the difficulties he’s faced (the horrible behaviour of himself and the rest of the band while in America leading to them being banned… quite rightly, I wouldn’t want to work with people who behaved like they did). He pays lip service to the notion that he can see his past actions were wrong… but then writes as if he still thinks he was entitled to act that way.

I suspect big fans of The Kinks may get something out of this book but even then I’d suggest looking for alternative sources of band history.

I do not recommend Living On A Thin Line!