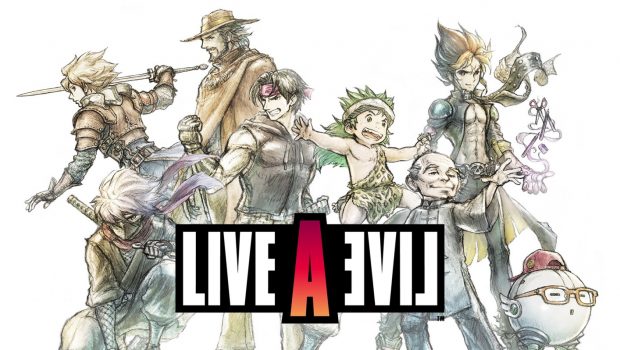 Summary: Live A Live is a truly unique product of its time that still stands out in the competitive field of role-playing games today. After playing, it makes sense that it would be lauded to this day for its subversive takes on JRPG gameplay elements and its multiple narratives. What’s most charming about how experimental the game is, is that it is not a subversion due to cynicism over the genre, but a love for its potential.

Released in 1994 exclusively in Japan, Live a Live remained something of a cult favourite for fans of the JRPG genre. The game was also the directorial debut for Takashi Tokita, who would go on to later direct Chrono Trigger and Parasite Eve. For this reason alone, Live a Live has piqued many fans’ interests in its exclusivity and historical novelty. Now having finally received a global release on the Switch, the game has also been remastered to have updated graphics and voiced characters.

The wide release has given the game a new life and audience for Western gamers. Capturing the spirit of the original, this remaster highlights the uniqueness of the game with only minor changes that keep the core experience intact. Even today it still feels fresh and innovative due to its subversive and experimental take on the genre, however, aspects of gameplay and narrative haven’t aged too well and in parts, can feel like a product of its time. 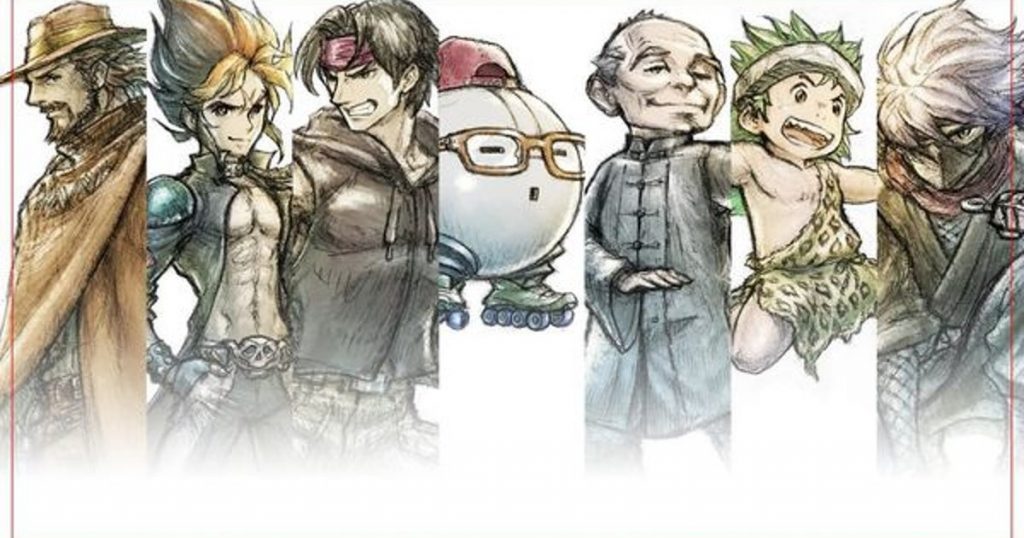 Live A Live is unique due to its multiple short stories spanning different eras of time. Each chapter is mainly detached from the other, however, each is connected through the main villain being a version of Odie. Each vignette takes the player through incredible setpieces, each with a diverse cast of characters. What’s most impressive, is that many of the stories are love letters to the respective genres of stories that they cover, while highlighting pop culture that was popular at the time it was made. For that reason, many stories lean heavily on campy cliche and story tropes which may at times feel very predictable.

I found this to have its own charm however, as most of the stories are so over the top to begin with, that the way the tropes integrate into the story can’t help but feel like a humorous time capsule. The Near Future chapter was the first chapter I did and it was a perfect tone setter for the rest of the game. I don’t think a game in recent memory blew my mind as much as this chapter did in terms of chaotic absurdity. You go from sleeping on a bench, to being abducted by Sans-looking gangsters, to then your buddy picking you up nonchalant on a motorcycle. The game goes to the next level as rather than time skipping the travel time, the game cuts to an intro cinematic of a power metal music video showing an army fighting a kaiju-sized robot. The tone flipping kept me on the edge of my seat as I was trying to comprehend these style choices, but at all times I was grinning ear to ear as it unfolded.

This level of humour extended into the combat as well, as certain moves would be using the opponent’s Mother’s shame against them to inflict damage. If the game was just this chapter for another 10 hours I would have been praising it as the best JRPG of its time. The remaining chapters themselves keep this level of fast-paced storytelling as well, giving you the bare minimum of context before letting you dive right in. Live A Live is a thrilling rollercoaster ride of campy surreal goodness, similar to Final Fantasy Stranger of Paradise or a Hideo Kojima game. Live A Live has a traditional NES JRPG style of gameplay, with turn-based combat with minor changes on movement in combat, similar to a Fire Emblem or Final Fantasy Tactics implementation. The gameplay of each chapter changes in minor ways. Some chapters will have more traditional RPG mechanics, such as random encounters, and battles giving you exp to level up and get stat bonuses and new abilities. Others will experiment with this formula. For example – the Present Day chapter focuses on levelling up through a Blue Mage mechanic, ensuring that you take hits to learn new abilities so you can take on the final boss. The Imperial China chapter is really interesting for this experimentation. You play a shifu master taking on students. The shifu cannot level up as they have hit their cap, but their students can. Meaning you have to decide which students you invest heavier into or give certain lessons to for bonus stat upgrades. Each chapter has its own defining gimmick surrounding the level-up progression and surprisingly, the ones that ignored experience grinding had my favourite combat systems.

In some ways, the main RPG mechanics at times does feel a bit dated. There are also at times due to the limited combat encounters, fights can feel a bit unfair as you may not feel like you have too much time to familiarise yourself with the playstyle of certain characters. I felt this way with the Gunslinger as there is really only one big fight in that chapter, and it’s against a boss that can one-shot you, meaning positioning and interrupting charges are the only viable strategy. The difficulty of this fight scales with how successful you are in the chapter’s mini-game. I also feel a bit conflicted on this point as if some chapters spent more time with combat, I could see myself finding it to be getting too stale and uninteresting as without levelling up, there isn’t really any reward for most encounters besides story progression. 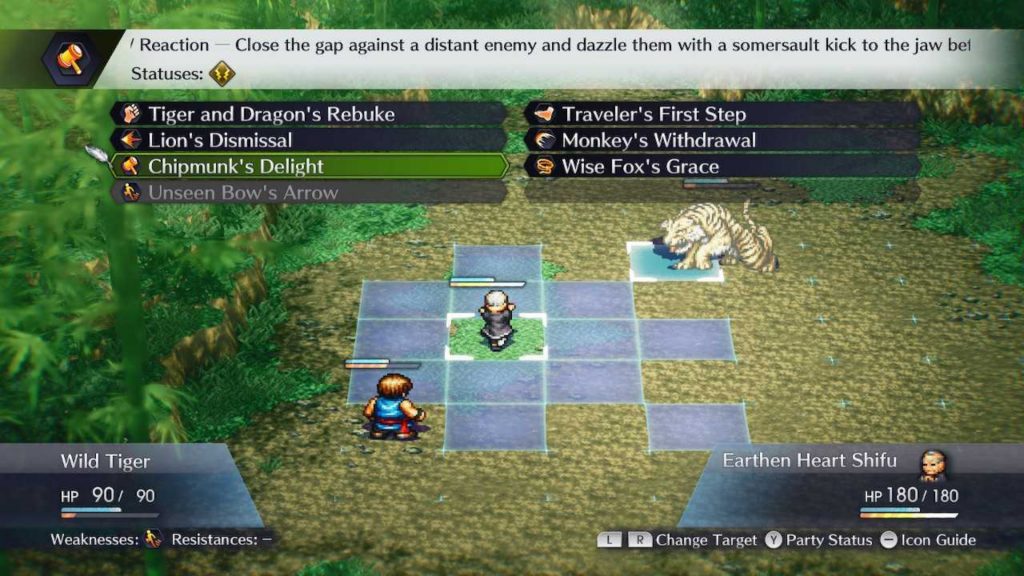 The updated graphics from the NES take on a stylisation similar to Octopath Traveller with its HD-2D aesthetic. In fact, it is only through Octopath Traveller’s success, showing this kind of style can be successful and appealing to modern audiences, that Square Enix could be convinced to take a chance on remaking Live A Live.

The end result is a glorious visual remake of the perfect 90’s time capsule of NES JRPG’s. Each character model is colourful and unique, and the environments, while familiar, have great detail even in terms of what you can interact with. A benefit to this art style as well is its simplicity, which makes it perfect for a handheld experience on the Switch. My only critique is that in battle, attack animations look very stiff and do not always make the moves feel exciting to execute. 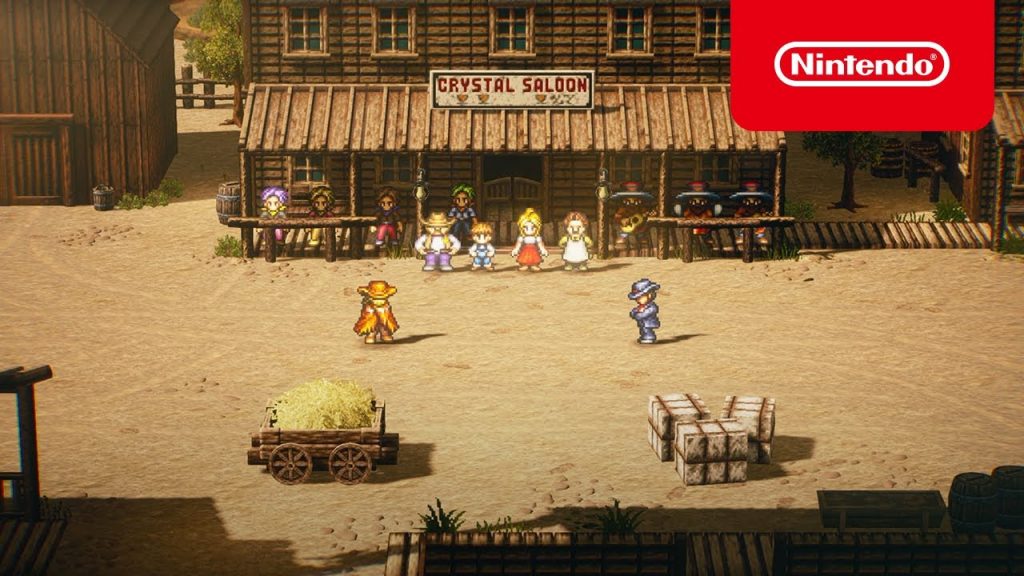 Live A Live is a truly unique product of its time that still stands out in the competitive field of role-playing games today. After playing, it makes sense that it would be lauded to this day for its subversive takes on JRPG gameplay elements and its multiple narratives. What’s most charming about how experimental the game is, is that it is not a subversion due to cynicism over the genre, but a love for its potential.

While these subversive qualities may date the game by modern standards, the short story structure means that you won’t spend too much time with it to let it detract from your enjoyment of the game. For that reason, I really appreciated the game for surprising me endlessly.