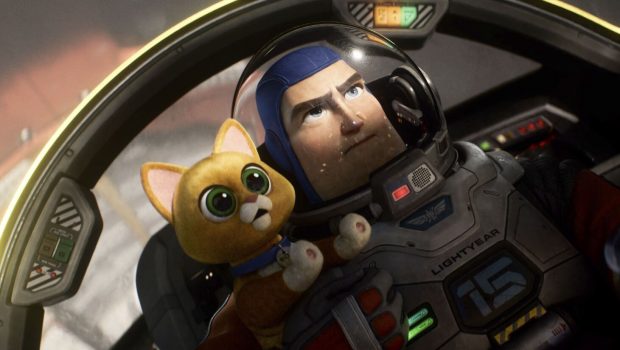 Lightyear is a one-hundred-minute toy commercial and one of Pixar’s most uninspired films. Its blunt message about accepting our mistakes is a case study in self-criticism such is its derivative, commercial instinct to flog merchandise outside the cinema doors. It is not as though gripping space adventures are foreign to Pixar. They memorably achieved such a feat with Wall-E (2009), one of the animation giant’s best films. Perhaps Lightyear’s failure was forewarned long ago. Toy Story (1995), the first entirely computer-animated film, offered a coda about simple toys being replaced by noisy, flashy ones. The irony is rich given the studio has fumbled an unnecessary origin story for one of its most endearing characters and delivered a bland action reel. In Toy Story, a collection of toys, including the mild-mannered, old-fashioned cowboy Woody, were dismayed when their owner, Andy, favoured the Galactic Ranger Buzz Lightyear over them. Buzz was hilarious because he was never as smart as his self-serving monologues intended. Now Disney and Pixar have developed a backstory outlining the inspiration for Buzz. Yet the only interesting trait of this weak spin-off are the visual flourishes by filmmaker Angus MacLane (Finding Dory, 2016). Otherwise, this is an increasingly dull exercise in animated combat and not as rich as it should have been.

Lightyear’s story framework is a clumsy bit of metafiction. The opening titles dully outline how the feature we are condemned to watch prompted Andy himself to buy the Buzz figurine. Welcome to capitalism 101, Andy. The film opens with Buzz (voiced by Chris Evans) exploring the planet T’kani Prime with his space crew, including his resourceful teammate, Alisha Hawthorne (Uzo Aduba). She teases Buzz for recording logs no one will hear and berates him for not responding to a rookie named Featheringhamstan. Despite his physical prowess, Buzz’s failure to listen to anyone prompts a fatal mistake. His inability to steer his ship to safety leaves everyone on board stranded on Prime for years. Pressed by his guilt, Buzz continually attempts to reach hyperspace but fails to escape. Weirdly, each test moves time forward for everyone but Buzz. Years pass and people like Alisha move on or pass away. Now deep into the future, Buzz is alarmed when the space program is cancelled by Commander Burnside (Isiah Whitlock Jr). However, thanks to some help from a robotic cat named Sox (Peter Sohn), Buzz escapes the base. In the wilderness, Buzz is attacked by tentacle monsters and robots. However, a chance meeting (contrivance) with Alisha’s granddaughter, Izzy (Keke Palmer), and her team of misfits, Mo Morrizon (Taika Waititi) and Darby Steel (Dale Soules), ignites Buzz to have faith in others, accept mistakes, and possibly escape the planet. Buzz is right. Get us out of here.

The only positive attribute is the film’s expensive, glossy aesthetic. Whether viewing the earthy red palette of the early planetary scenes, spotting the high-tech equipment on the base, or floating across the dark expanse of space, Lightyear offers undeniably crisp, photorealistic visuals. There is a subtle visual ode to 2001: A Space Odyssey (1968), specifically the stargate sequence. Less imaginatively, some shots are blatantly taken from Star Wars. The visual spectrum, including the high-contrast lighting, is amplified by the enormity of a large cinema screen too. There is one particularly attractive shot where Izzy leaps precariously from one ship to another. To stress the image’s depth, MacLane frames the action from a long angle shot. It is the one moment where the visual artistry enhances the action. Otherwise, MacLane has no feel for tone, pacing, or tension. From the opening, he imbues every scene with tiring banter and weightless combat. No one would expect an animated film to be particularly visceral. However, the frequent battles are muted by dull antagonists and a lack of meaningful stakes. If the predictable and exhausting script by Jason Headley offered context as to why Buzz’s adversaries exist besides recreating Saturday morning cartoons, MacLane might have effectively balanced the pacing.

This same formulaic screenplay is responsible for Lightyear’s failings. Headley’s one interesting idea includes the time shift sequence where everyone except Buzz ages. It is the closest Lightyear comes to probing intriguing sci-fi themes. Admittedly, it is a concept already dramatised by Christopher Nolan in Interstellar (2014), which the director borrowed from Philip K. Dick’s novels. It would be more satisfying if the premise did not dilute the characters’ geography. Instead, Alisha’s disappearance leaves her much-discussed same-sex relationship to one image, which is a cop-out. Similarly, Burnside is a superfluous addition since he only bookends the film. Sox is quietly humorous in the early scenes despite his persistence closely resembling Dug from Up (2009). Though from Sox’s first appearance, the merchandising around the character feels calculated and inevitable. Meanwhile, Buzz’s new teammates exist to hammer eye-rolling messages about teamwork, trust, and forgiveness. The obvious messaging would be less problematic if the narrative mattered or if the jokes landed. Instead, the story’s trajectory, bar a rushed twist, is lazy and predictable and the laughs fleeting. Buzz’s arc from uptight jerk to sensitive spaceman envisions the screenwriter sleepwalking through the creative process. The emotional setbacks, once a Pixar bullseye, are now lame and unaffecting. Evidently, great visuals are inconsequential unless matched by quality writing. 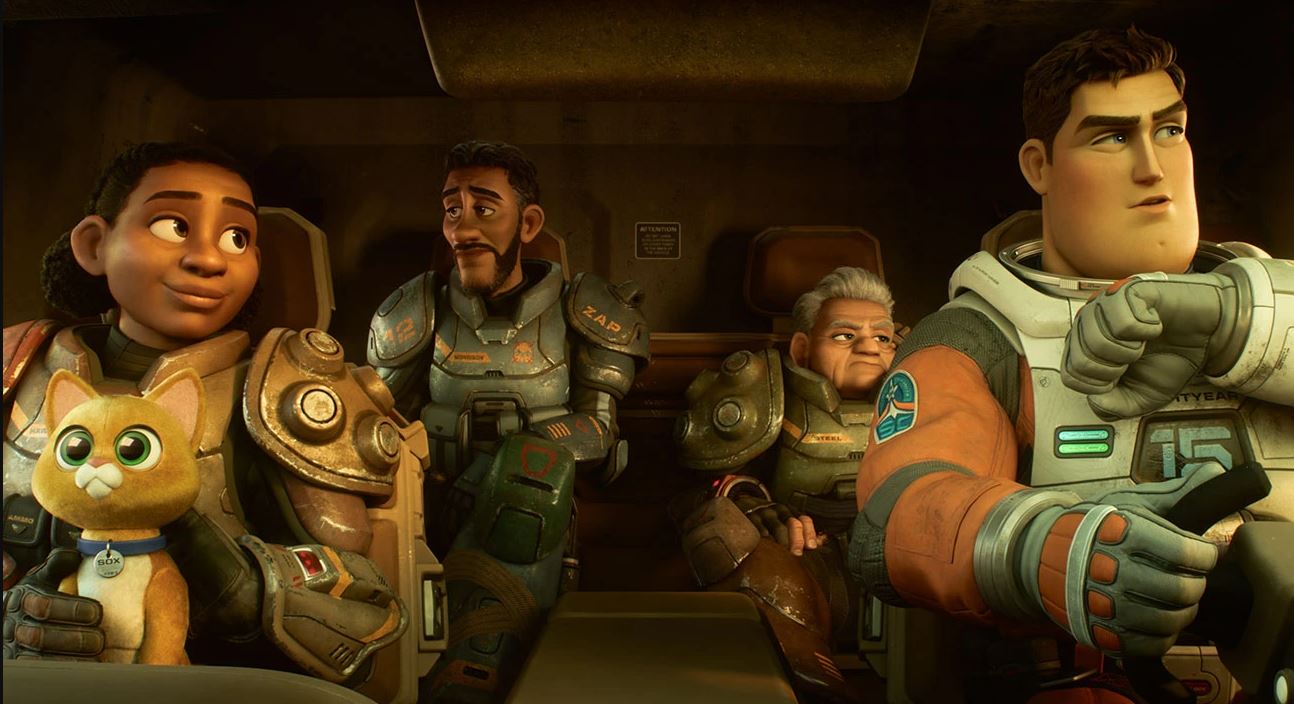 The cast’s persistent, energetic voice acting is merely passable. For whatever reason, Chris Evans has replaced Tim Allen as the voice of Buzz. Evans’ work is solid if predictable at underlining Buzz’s self-importance, grandstanding, and perfectionism. Yet Allen drew from his own comic persona to cleverly evoke Buzz’s idiocy. Some of the humorous tone remains but the change in voice actor prompts a noticeable shift in the comedic emphasis. The other performers, including Keke Palmer, Taika Waititi, and Dale Soules are okay but scrape through the motions due to the adolescent material and forgettable side roles. Darby Steel, an elderly member of Buzz’s team, repeats a line about not going back to gaol, which was already a gag used in Monsters University (2013). Who could guess Waititi’s bumbling rookie, Mo, will prove as reliable as the spaceman from The Lego Movie (2014)? Emperor Zurg (James Brolin), who has cameoed in other Toy Story films, barely features. The thought of yet another sequel after how predictably Buzz’s team combines to defeat Zurg is exhausting to consider.

Lightyear is disappointing because we have come to expect more imagination, creativity, and humour from Pixar. It is handsomely photographed but fails to justify why after four Toy Story films this origin story was needed. Angus MacLane prefers bludgeoning the audience into submission with set pieces and endless escape routes. Scene after scene of action creates an increasingly boring pattern of conflict that wears us down long before the credits. The exercise would be less forgettable if MacLane enriched the sci-fi themes, expanded the alien world, or generated big laughs. Instead, you sense the toy manufacturers aggressively salivating in the editing room. Lightyear’s capitalist intent is reductive to its message. Mistakes are supposedly forgivable, and outsiders are heroes of the day. If that were true, the film would take more risks. Its job though is to sell toys to unsuspecting suckers like Andy. Nonetheless, small children too young to play video games like Halo will relish the combat’s frequency. Long before the end though their parents will be ready to scream, ‘so long, partner!’

Summary: The only positive attribute is the film’s expensive, glossy aesthetic. Otherwise, Lightyear is a one-hundred-minute toy commercial and one of Pixar’s most uninspired films.