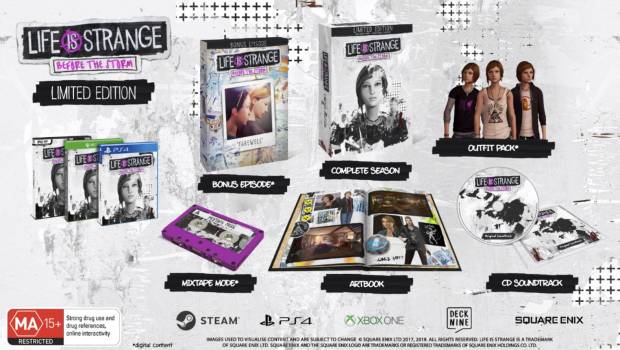 Life is Strange: Before the Storm Boxed Limited Edition Announced

SYDNEY, 19TH January 2018 – SQUARE ENIX®, today announced that a boxed Limited Edition of LIFE IS STRANGE™: BEFORE THE STORM, the latest game in the award-winning, multi-million copy selling, episodic franchise will be released on March 9th across Australia & New Zealand on Xbox One, PlayStation 4 and PC.

The Limited Edition contains a physical artbook featuring art from Life is Strange: Before the Storm plus the licensed soundtrack on CD. The Limited Edition also includes access to the Life is Strange: Before the Storm Bonus Episode, ‘Farewell’. In this episode, players see the return of a young Max Caulfield. This episode welcomes the original voice actors Ashly Burch & Hannah Telle, resuming their roles as Chloe and Max.

A full list of included tracks can be found below: