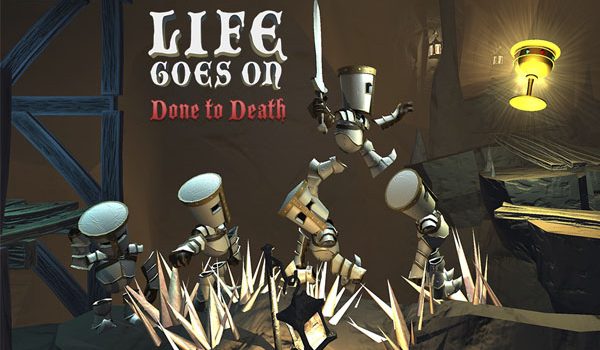 Summary: Life Goes On - Done to Death is an accomplished little indie that offers up a tangible challenge.

Life Goes On – Done to Death is an inventive little puzzler that, rather than punishing death, positions it as a necessary component for progression.

That’s right, you actually get rewarded for using the phalanx of Knights at your disposal as cannon fodder… Often there is no victory without sacrifice and Life Goes On perfectly encapsulates this age old adage. 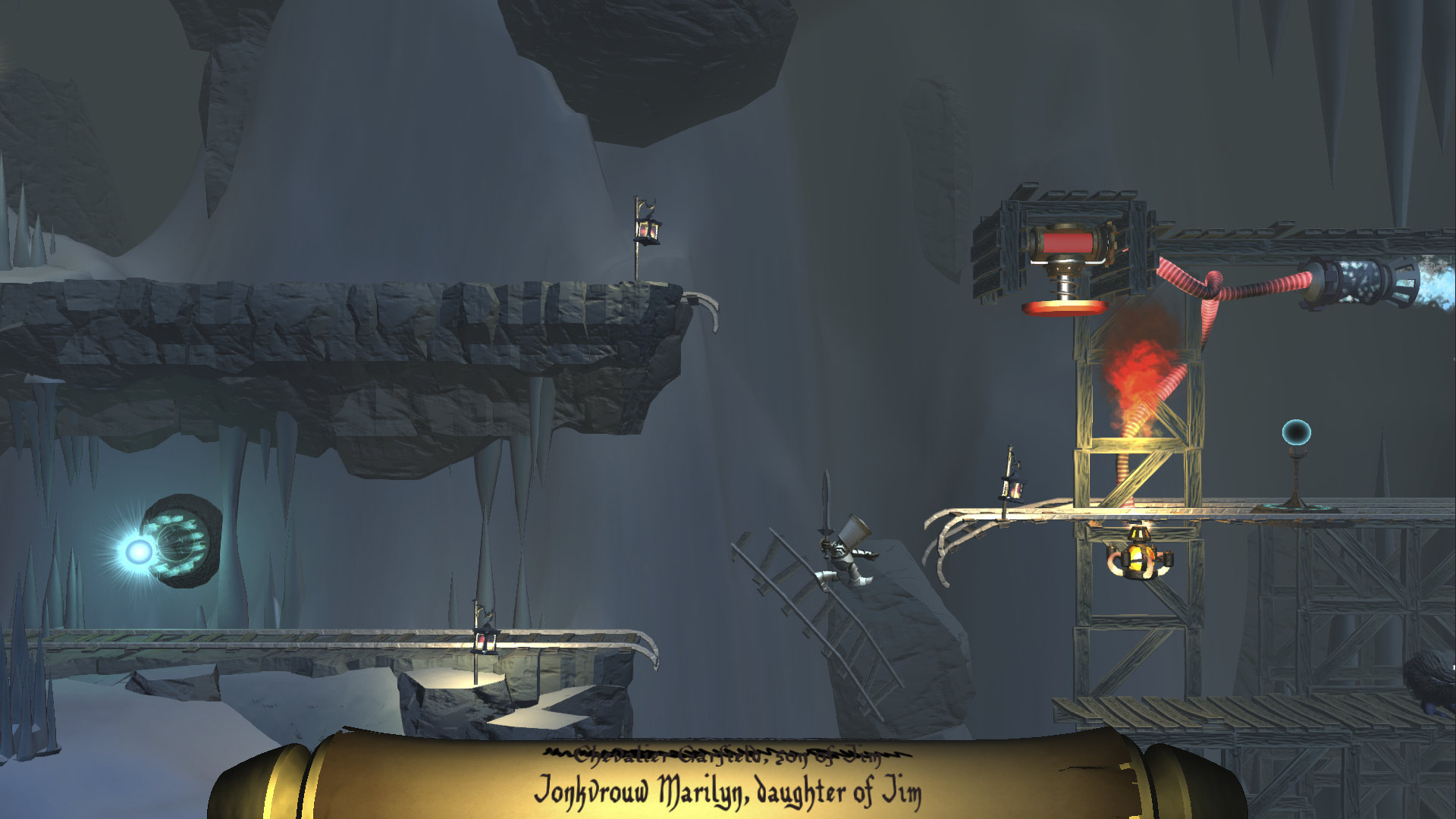 Developer Infinite Monkeys have crafted a platforming puzzle game that sees you tackling short, self-contained levels with the ultimate objective of retrieving a golden chalice that lies behind a series of fiendishly difficult traps. In order to do this, you must engage the old grey matter as well as use the corpses of your fellow knights in order to depress pressure sensitive switches, serve as handy stepping stones over vast expanses of spikes and many more varied ways of clearing a safe path to victory.

There are a nice variety of main areas, including mines, mountains, a castle and an outdoor area dubbed the ruins, and each hold a plethora of short levels within them as well as a longer section that will put all of your acquired talents and skills learned through your playthrough to the test in one lengthy, continuous run. 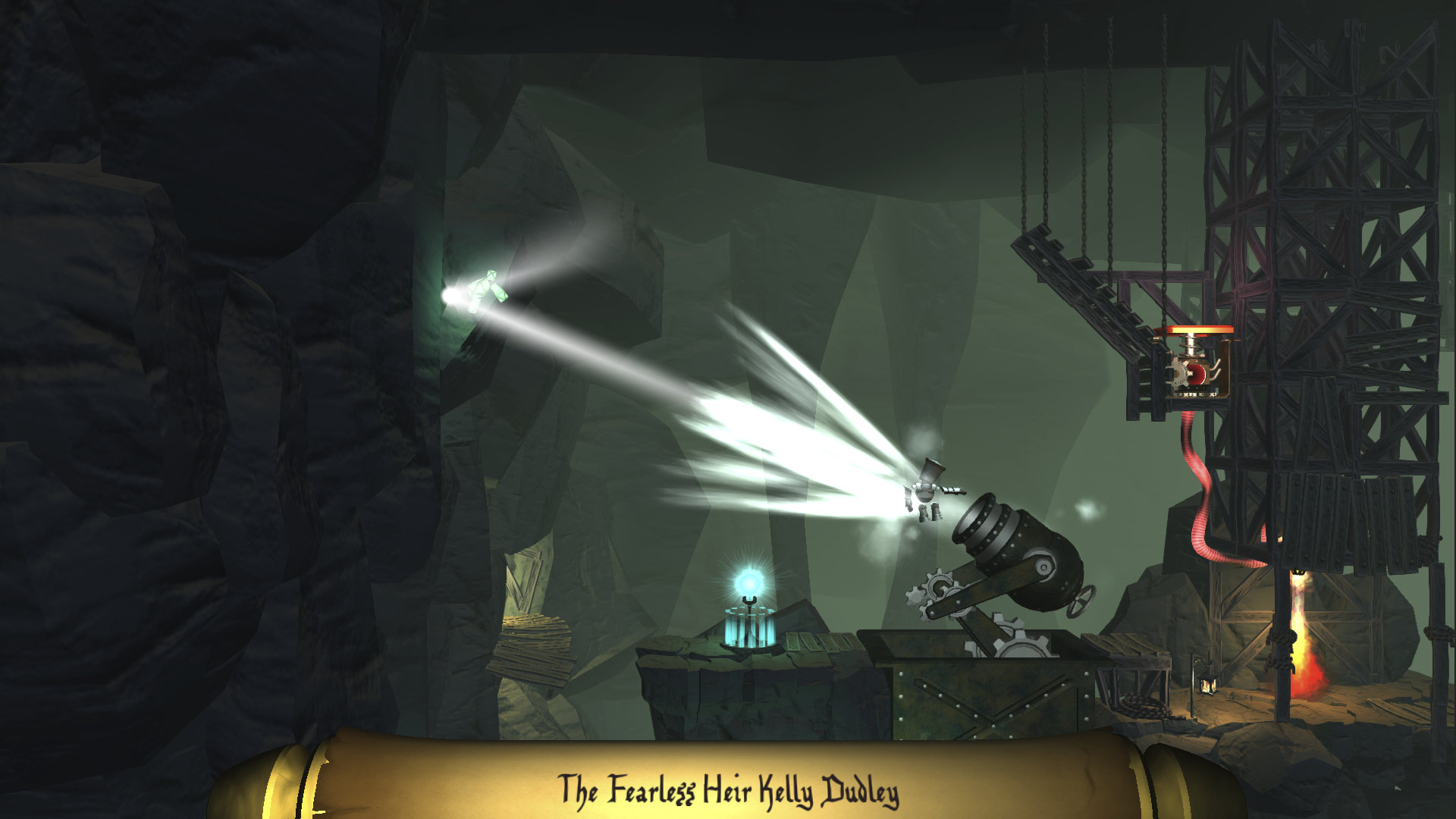 Each level contains a series of checkpoints that serve as a respawn point for a fresh knight after the previous inevitable casualty; activated by touching them, these checkpoints serve as a way to bypass the traps you’ve previously made it past but also often act as an obstacle themselves, requiring quick reflexes and some fancy footwork in order to not accidentally come into contact with a previously passed section.

There are three basic challenges to achieve in each level besides obtaining the chalice – Don’t exceed the maximum level of Knights used, complete the course within a certain amount of time and make sure you feed Jeff. Who is Jeff, you ask? He’s a disarmingly cute little creature with a voracious appetite who loves to feast on the flesh of Knights and is usually situated in some hard to reach corner of each stage. 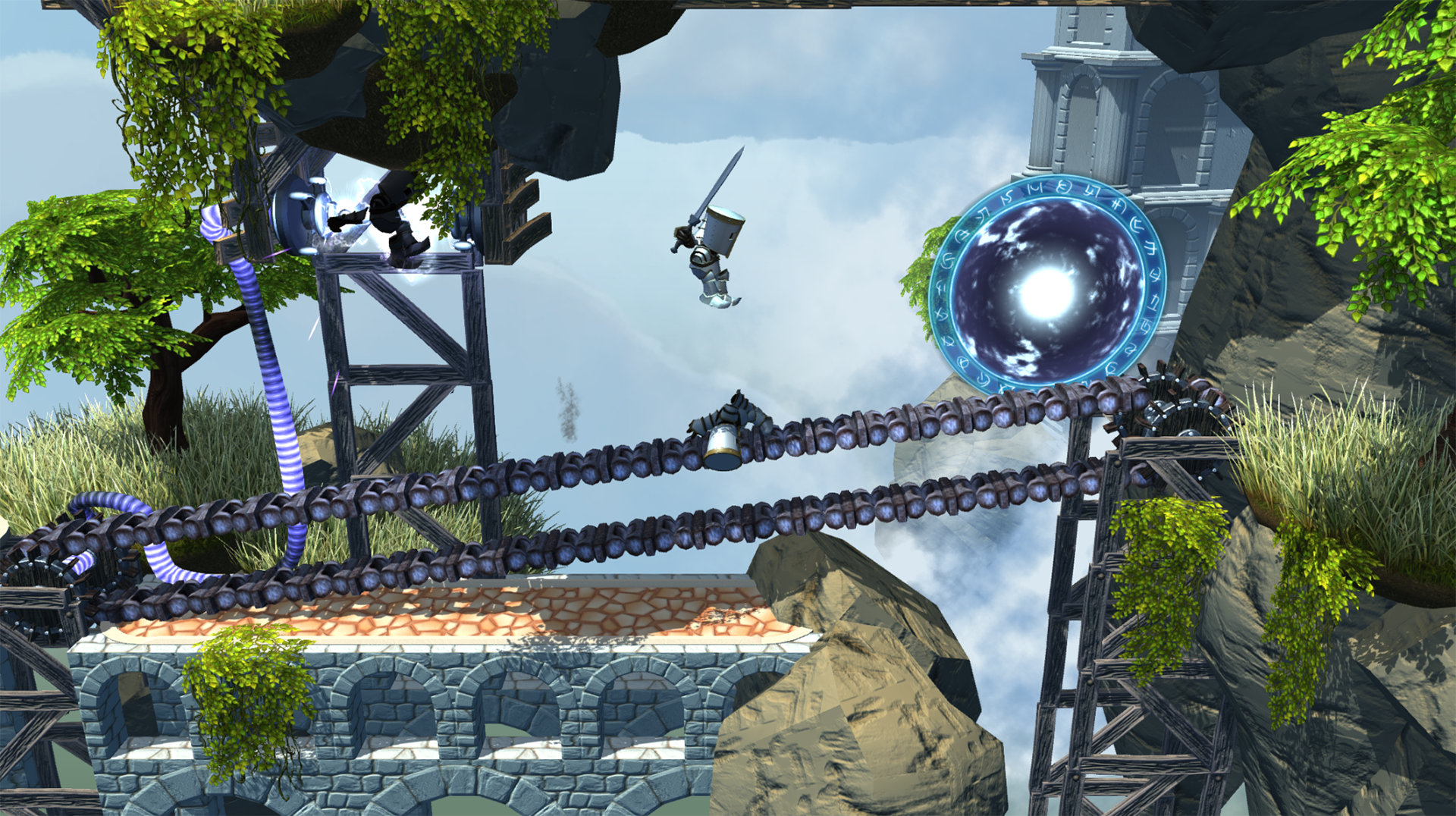 The game eases you into the basic mechanics, using incrementally difficult challenges that force you to take advantage of your environment and the legion of armoured minions at your disposal. Certain elements of the environment have the potential of destroying your perfectly position cadaver, such as rising lakes of lava or flamethrowers attached to tracks incinerating the corpses, so careful planning and spatial awareness is a necessity if you hope to make it to the end and check off the challenges.

You’ll also come across creatures who need to be fed before falling asleep, seesaws that allow you to reach previously inaccessible areas, convoluted switch systems that require activation to open up barriers, cannons that require pinpoint precision in order to be used effectively and much more – The level of variety in traps for each level is admirable, even if by the latter stages this innovation dries up somewhat and proceedings become a tad repetitive due to the recycling of certain puzzle elements. 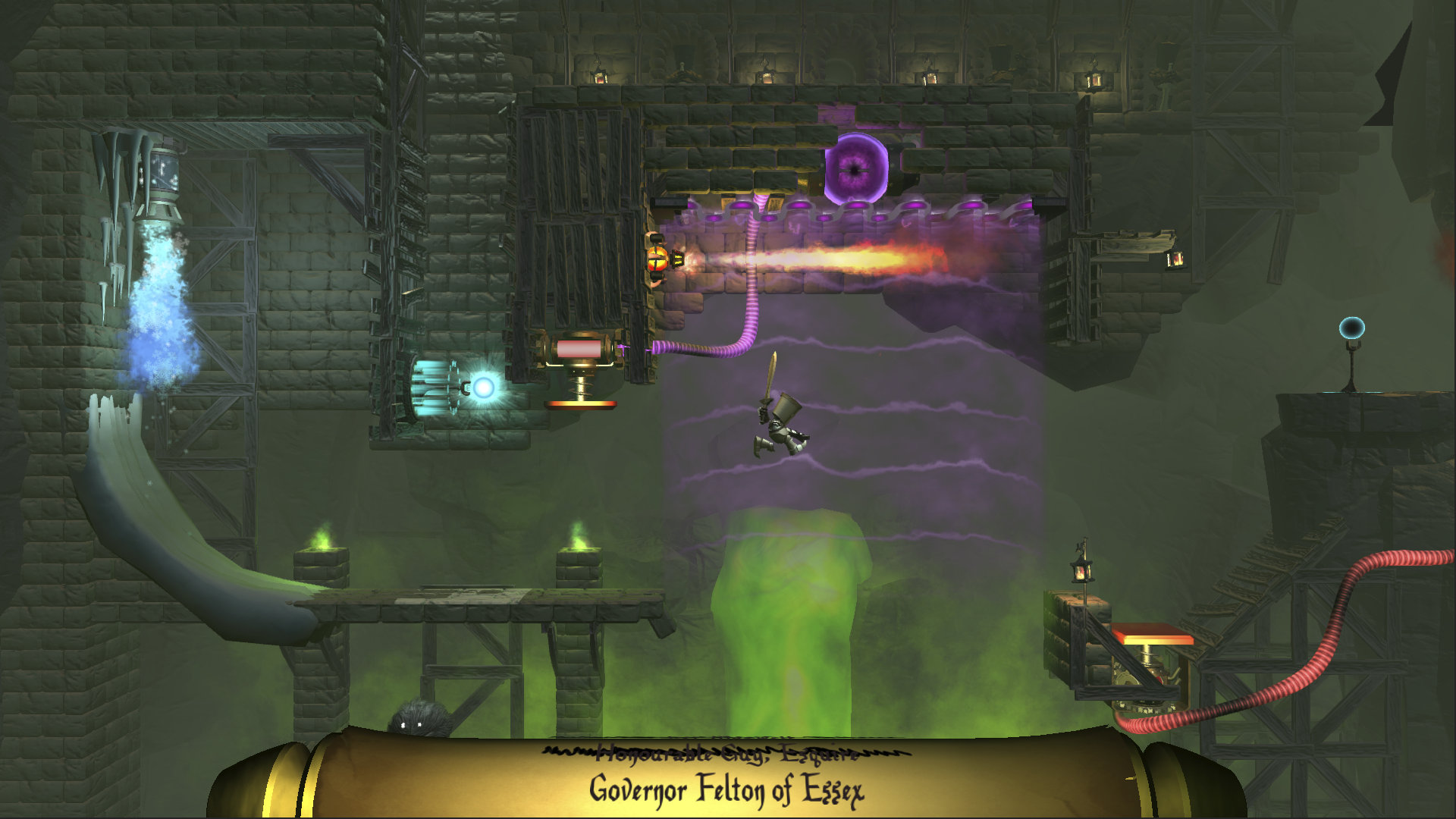 Life Goes On – Done to Death has an endearing visual style that adds a goofy aesthetic to the morbid central conceit of the game. Character designs are exaggerated and cartoonish and each level is solid enough in artistic style but become a little samey after a while. Graphics are presented in a 2.5D side-scrolling view and overall the visual aesthetic helps cement the charming quality of the game. 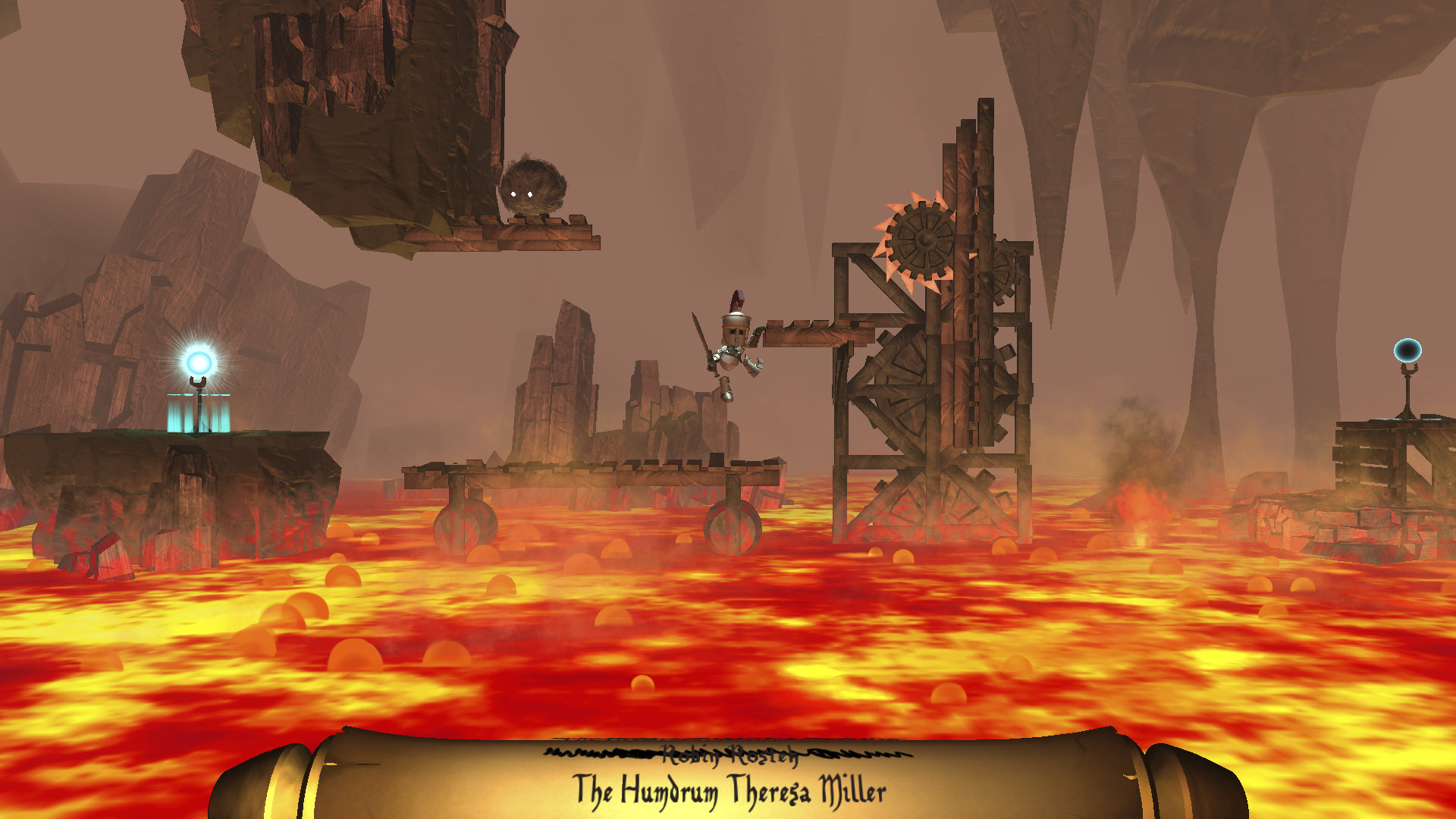 Fiendishly difficult at times, Life Goes On – Done to Death will no doubt infuriate gamers who aren’t the biggest fan of the puzzle/platform genre, but for those of us who enjoy having our melons twisted a bit, it’s an accomplished little indie that offers up a tangible challenge that manages to engage the brain cells and thumb dexterity from beginning to end. The difficulty does kind of plateau out by the last world but this is more due to a greater understanding of the mechanics by the player and previously insurmountable obstacles becoming almost trivial.

Adding extra levels, unlockable hats and weaponry to the game for its PS4 release, Life Goes On – Done to Death is chock-a-block with charisma and humour, particularly the quirky names afforded to each of your tiny lemming-like venturers into the unknown. It won’t be for everyone but if you’re looking for a solid little brain bender to fill in your time over a weekend or so then you could do much worse than giving this entertaining little foray into mass suicide a look.