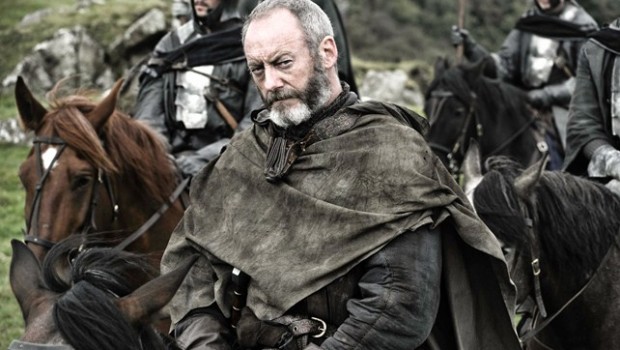 Where did we leave Davos at the end of season three?

Davos had a tough third season, because of his apparent death at the end of two. When he returns, he’s not exactly welcomed back into the fold. Melisandre [Carice van Houten] was obviously delighted to get him out of the way. When he does come back – and this is one of the things that I love about working with Stephen Dillane [Stannis Baratheon] – the easy acting route would be to turn around and go, ‘I thought you were dead!’ and to play it with some sort of humanity. He doesn’t even get up off his chair. It’s great for me, craft wise, to be playing opposite somebody like that. When you’re expecting any sort of humanity or emotion, but he’s giving you nothing, it’s great to play off. Davos has been quite a sympathetic character, so Stannis immediately alienates himself and makes the audience go, ‘You miserable bastard!’ That’s one of the reasons why Stephen is great to work with.

And yet Davos is very loyal to Stannis. He was even prepared to risk his own life and go against Melisandre…

Yeah, Davos tries to take the red woman out and ends up in jail, and by the time you get to the end of the season, a bizarre thing happens: Stannis orders his death, because of what he’s done with Gendry [Joe Dempsie], and Melisandre saves him. It’s one of the things I love about this show – you just don’t know what’s going to happen. It puts a wry smile on your face, as an actor. Dan and David and the writers don’t make it easy for themselves, and that gives an actor something to play with, and if an actor’s got something to play with, it’s always more interesting to watch. That’s one of the things the audiences really take to: when you’re not presented with processed lowest common denominator stuff, you are outwitted. I always use the analogy of Jamie (Lannister played by Nikolaj Coster-Waldau). At the beginning he is a complete bastard – look what he does to Bran (Isaac Hempstead Wright) in episode one – and as a viewer, being fed the diet of the usual drama, at the end of one you sit back and go, ‘Okay, we know where we are with that character – he’s a complete bastard.’ But by the time we get to middle of season two, maybe, it’s completely different. I’ve had so many people coming up to me and saying, ‘I was sort of wrong about the Jamie thing.’ I say, ‘You weren’t wrong! He was a bastard.’ Audiences love being outwitted. It becomes a game with the people who make it. When the Ned Stark moment comes up, or the Red Wedding, anything can happen. You are taken out of your dramatic television comfort zone. As far as I know – and I haven’t read the books – I was told Oona Chaplin’s character [Talisa Maegyr], in the book, goes back home – she doesn’t get killed – but in the show, who’s the first one that gets it? Oona Chaplin! So the people who have read the books go, ‘What the fuck?’ It’s a nod to the people who have invested in the books, but at the same they’re kind of going, ‘Well you weren’t expecting that, were you?’ I really like that. There’s a genuine concern for how the audience is going to take this, and as such, they are treated as intelligent human beings, which is almost unheard of in television.

Tell us a bit about where we go in season four?

Without giving too much away, this is probably the lightest season I’ve had so far. At the same time, the Stannis Baratheon and Davos thing has the most impact. We’re kind of sparse, but my God do we make a mark. We have spent the entire season three licking our wounds. Melisandre has, as usual, led us astray, and had us doing horrific things, and becoming as bad as the worst of the rest of them – the Lannisters, or whatever. So something has to give, and it’s starting to crumble. We’re not getting much support, because we’re seen as a spent force. The families and the banner-men who were going to support the Baratheons, are not coming together as much as we’d like, so something has to be done, and a bit of lateral thinking is needed, and with the aid of Shireen, Stannis’s daughter, the penny drops. Episodes nine and ten become incredibly interesting.

Have you seen the reaction videos to the Red Wedding episode?

I did. I’ve shown them to people who don’t watch the show and say, ‘What’s it like?’ I went, ‘I don’t want to spoil it for you in case you start watching it, but here, have a look at this.’ And people who don’t know about the show go, ‘What!!?’ It’s extraordinary.

Are there more of those shockers in season four?

I had my jaw on the ground when I read the Red Wedding in season three, and that’s episode nine. I had my jaw on the ground in episode two. One, two, and three, season three kind of builds up. There was a slow ebb and flow. But it’s not like that in this season. This is much bigger than the other seasons, and there are quite a few climactic things in this. They’re going to be shovelling them at you; you’re not going to know where to look. It’s very cool.

How did you first get involved with the project?

They first came to me for the pilot. They wanted to have me as another character. It was a whole professional thing, a timing issue, and in the end they went somewhere else. They were delightful, and when I’d read episode one, I went, ‘This is gold.’ I got onto my agent and said, ‘Look, I’ll be in this. Absolutely no problem. It’s gorgeous.’ I met the guys, Dan [Weiss] and David [Benioff] and they were absolutely delightful. But the timing didn’t work out and it was cast, and when they went elsewhere, they said, ‘Look, next year we’ve got some really interesting characters coming in. We’d really like to talk to you for season two.’ And I went, ‘Yeah, fine.’ You don’t get your hopes up for this sort of thing; you think, ‘Okay, this is coming from America, so I’ll take it with a pinch of salt.’ But true to their word, they came back. And I’m so glad that they did. To be honest, I thought the chance had gone and when it came back again, I jumped at it. It’s a wonderful piece of drama.

So that’s when they asked you to play Davos?

Yeah. Bizarrely, Carice and myself had done a movie in South Africa together. We were lovers, and obviously we hate each other in this. It was a film called Black Butterfly, a true story, about a Sylvia Plath kind of character. She was very tragic, committed suicide. Mandela’s favourite poet; he quoted her at his inauguration in 1990. Her dad was in charge of censorship for the apartheid regime, and she was very liberal, in every way. She had this guy who she was in love with. We were those two. Then we come over to this where we despise each other. It was just like a marriage, really – we loved each other at the beginning… (laughs) I thought she’d be perfect for Melisandre, and she thought I’d be perfect for Davos, and she said it when she met David and Dan, and I said it too, and we both ended up in it and it’s been great working with her again. She’s a fantastic actress..

It seems like you’ve really enjoyed working on the show?

It’s beautiful! In 50 years time, people are going to be watching this. It’s a little bit of artistic legacy. The most gorgeous thing about it is that the most difficult thing to write for is an ensemble, and this is like 29 people. It’s a nightmare to write for, and it must be the most expensive television show ever. I hope HBO make billions on it, because they took a punt on this – and this is not me licking their arse or whatever – they took a punt on a really expensive and odd show, on a thing that the awards people usually have no time for, which is fantasy, and it’s paid off for them. I’m delighted for them. You speculate to accumulate, and they did. This is the golden age of television now, you’ve got Breaking Bad, Mad Men, Game of Thrones, and there’s more coming. It’s because there’s a lot of independent filmmakers – very bright, creative, people – who couldn’t get movies made. You have somebody like Showtime, or AMC, or HBO, come in and go, ‘There’s a pool of talent out there. Why don’t we just give them as much as we can, let them off the leash, and we’ll make a lot of money.’ And they have.

Who’s your favourite character apart from your own?

Tywin. I love Charles Dance – I think he’s a fantastic actor – but that character is so good. I love the way the Lannisters kind of shit themselves any time he shows up. He’s the boy that keeps them all down, but I like him, and I like his sense of madness. I get his sense of legacy and family.

Do you get to see the other members of the cast in the separate strands?

No. Without giving too much away, I did a bit with Jon Snow this year, and I did a bit with Ciarán Hinds as Mance Rayder. Delightful fella. I’ve worked with him for years and years, and he’s an absolute delight. But I see very few of the others, because it’s very insular. When I get to see it, I’m watching it like a fan. I mean, I know the story, and I know what’s going to happen, but you don’t know how people are going to play it. In fact, when I’m reading it, I try to get the spirit of the story, but I try to avoid reading too much. I try to skim over it as much as possible.

Have you avoided reading the books for the same reason?

Well no, it’s not specifically that. The Davos character is a point of view character. There’s a lot of stuff going on in his head, and the boys had to flesh this character out and make him three dimensional, so he’s quite different to how he is portrayed in the books. I talked to the boys and I went, ‘Look, is it going to be worth my while reading these?’ And they went, ‘Not for what you’re doing.’ They said, ‘It’s up to yourself, but I don’t think it’s going to help you, character-wise.’ Besides, I don’t want to be playing something that’s in the book, but not in the script. The script is my bible: you open it up and there’s your story. If something doesn’t make sense, it will be because it’s not in the script. You don’t want to go, ‘Oh yeah, that makes sense because I read that bit in the book.’ I don’t want to do that.

I met him in L.A for the first time last year, when we were at the premiere. He’s an interesting character. So is his missus. Very interesting characters. He did let me in on a little secret, but I can’t tell you. It’s something to do with the books (laughs) but I’m sworn to secrecy!

Did he tell you how it all ends?

No way! I’m sure I wouldn’t get that out with a gun.