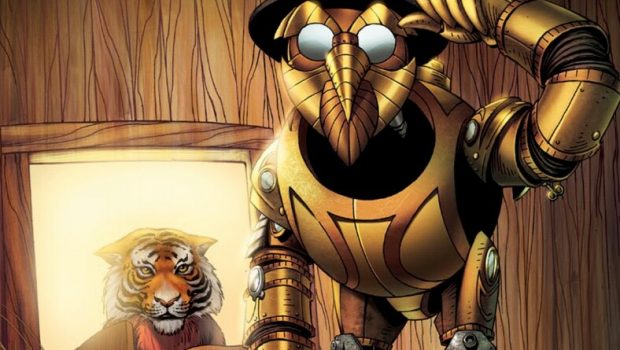 Summary: The creative team worked so well together bringing this section of OZ to life, the East side of the "Wicked West" looks phenomenal! 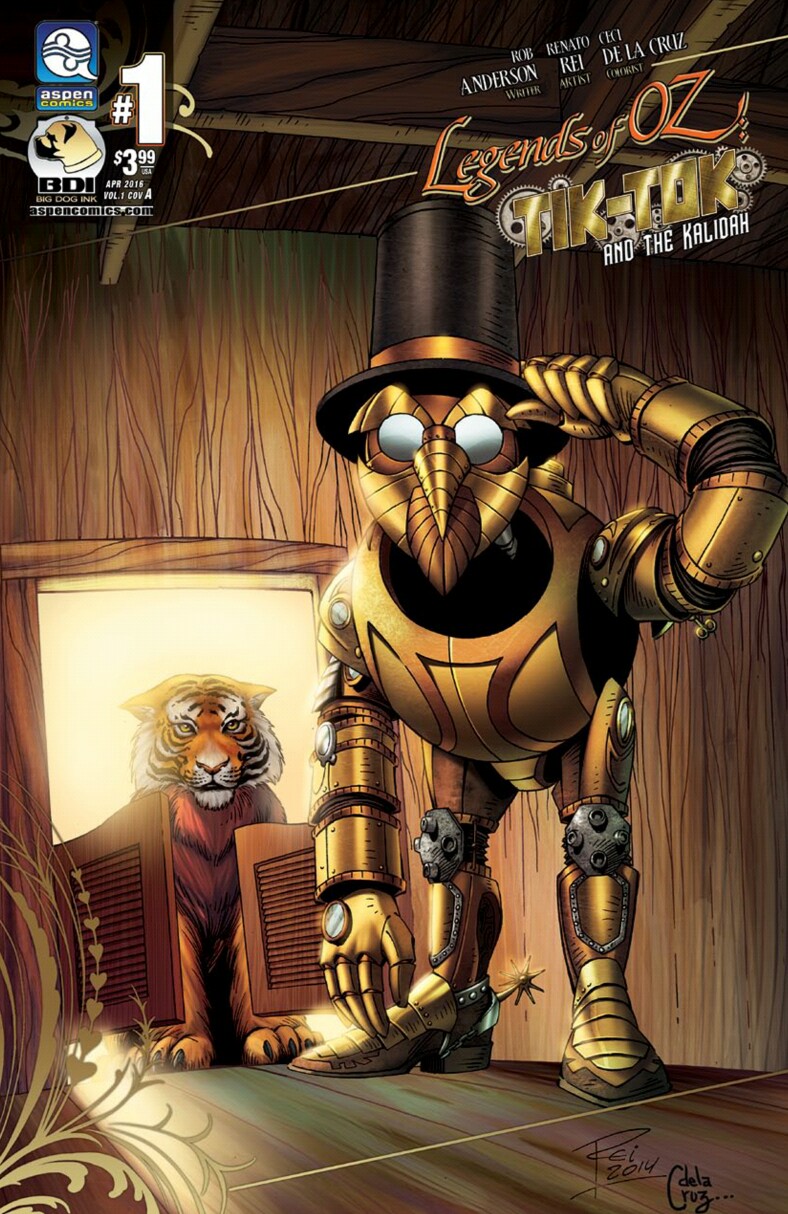 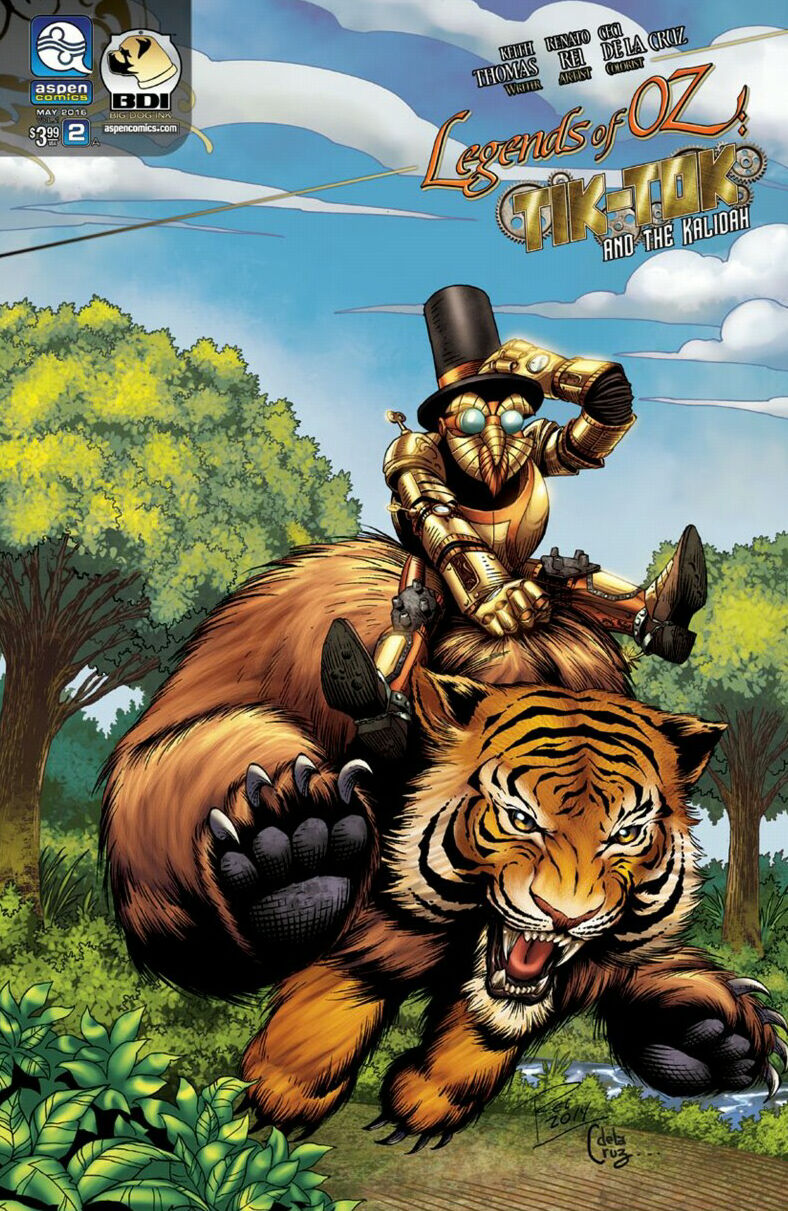 The story takes place on the East side of Oz, near the border of Munchkin Land and Gillikin Country, and we get a glimpse of a mechanical/clockwork man and a bear-bodied/tiger-faced animal. These are the stars of the series, and the action begins immediately as the mechanical/clockwork man, Tik-Tok, storms into a saloon, searching for an object and claim the Wicked Witch’s reward. But first, Tik-Tok has to confront six outlaws who are in possession of a compass that will help him search for the object he’s looking for. The action is fast paced, and the readers will see what Tik-Tok is capable of. Kali, the bear/tiger animal, waits patiently outside for Tik-Tok, and shortly after Tik-Tok leaves the saloon, we see that he needs to be wound up in order to function, so Kali has to wind him back up. It’s at this moment where we realize that these two need each other to further advance in their quest. 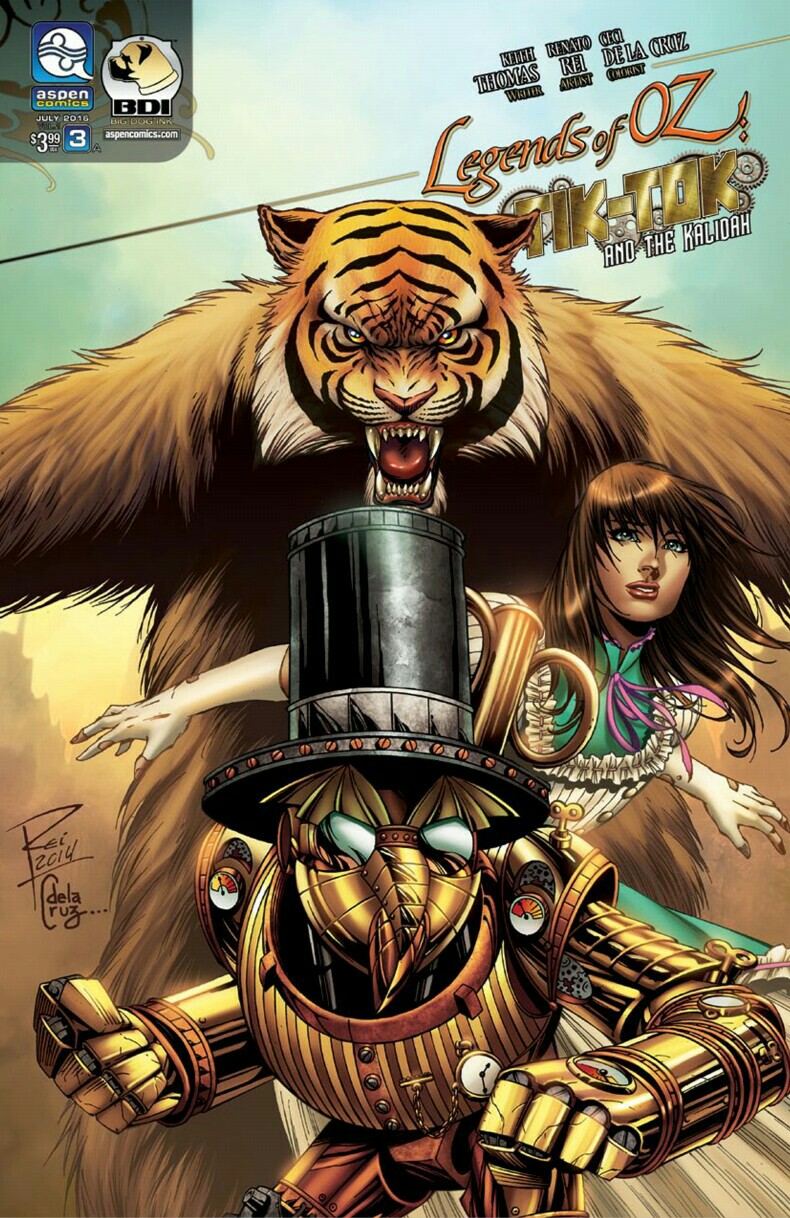 The Wicked Witch’s flying monkeys show up moments later, and they’re after the same object as well, so they trail Tik-Tok and Kali. The object they’re all searching for is something unexpected, even for the readers. As their adventure continues, Tik-Tok and Kali meet a mysterious girl that they have to protect, they’re being hunted down by the flying monkeys, then later in the story, Kali’s pack that banished him, the Kalidahs, are chasing them as well. There’s an epic battle near the end of the story, and the conclusion has closure to this miniseries, albeit a tragic one. We also see a familiar face at story’s end. 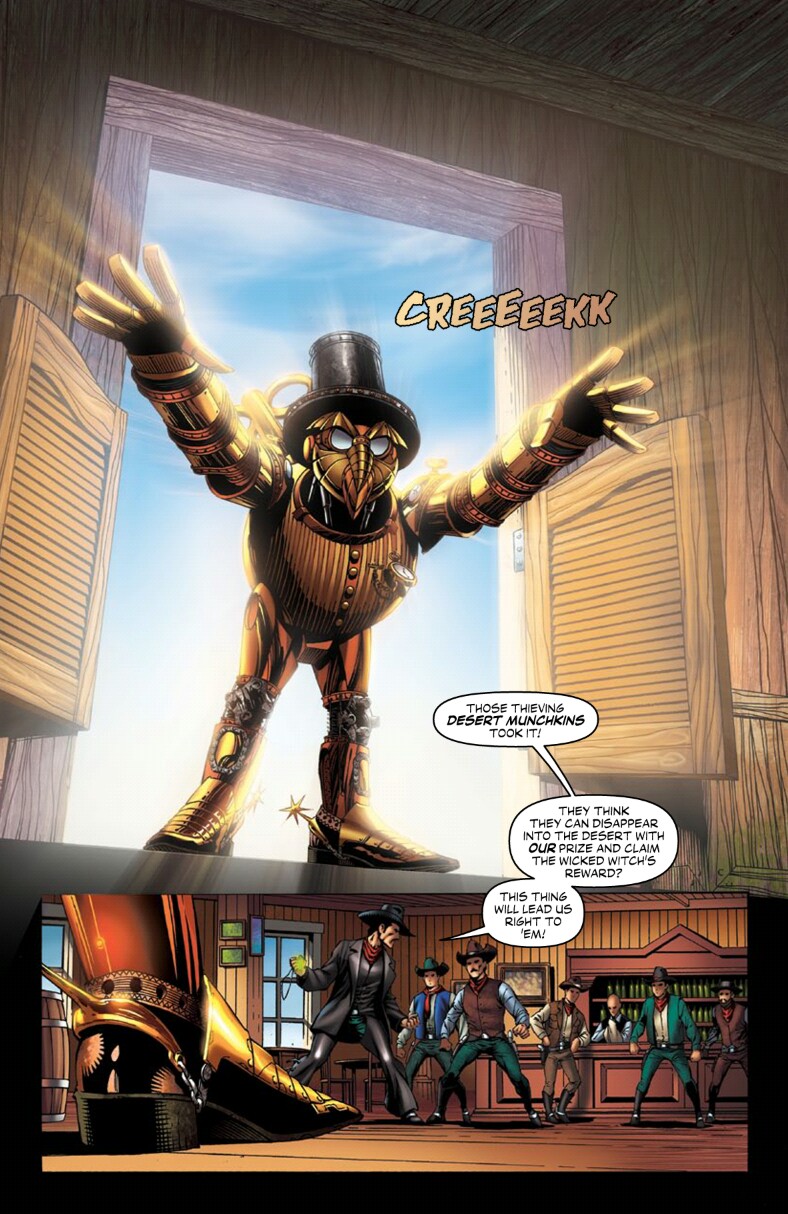 This is a fun and entertaining story, but it’s unfortunate that it’s a three-part miniseries. The introduction is fast paced, then the story slows down a bit, but these moments are necessary in order to tell a great story. It’s these moments where we find out more about the characters and some of their characteristics, and that’s what makes the readers care about the cast. The last act picks up the pace, and this ends the miniseries of Tik-Tok and the Kalidah. Hopefully, this won’t be the end of the “Legends of OZ: the Wicked West” series and spin-offs. 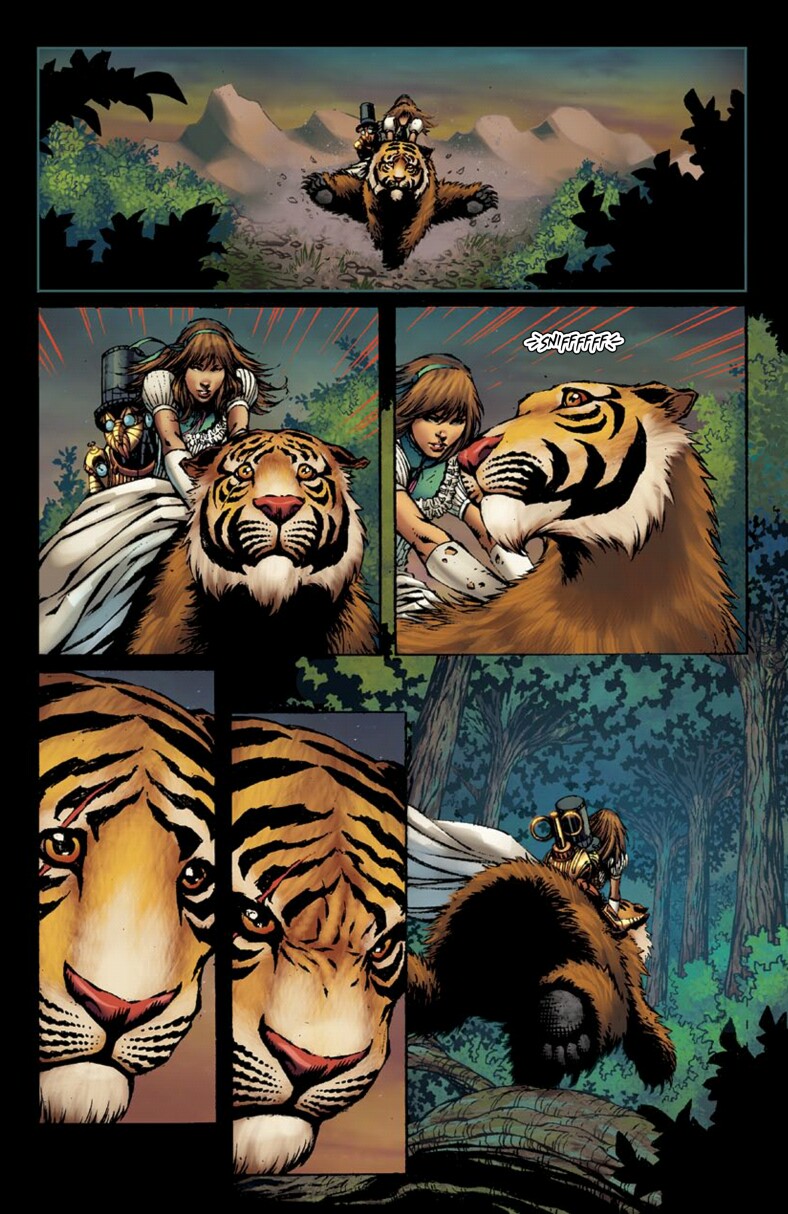 Overall, this is a great series, and fans of the original series will enjoy reading this story. “Wizard of OZ” and fans of good old Westerns will enjoy this as well. Rob Anderson wrote a wonderful story, and even though Kali doesn’t speak, artist Renato Rei illustrates him so well, we know what he’s saying or what emotion he’s feeling through his facial features. Also, Tik-Tok looks amazing with his steampunk, mechanical features. And the flying monkeys? They have to be seen to fully understand how terrifying they can be! Ceci de la Cruz is very talented with her coloring skills, giving life to each location in this story. From the East side of Oz, to the nighttime…de la Cruz compliments every panel very well. The creative team worked so well together bringing this section of OZ to life, the East side of the “Wicked West” looks phenomenal!

I rate this series 4.3 out of 5 stars, and I highly recommend reading these books. 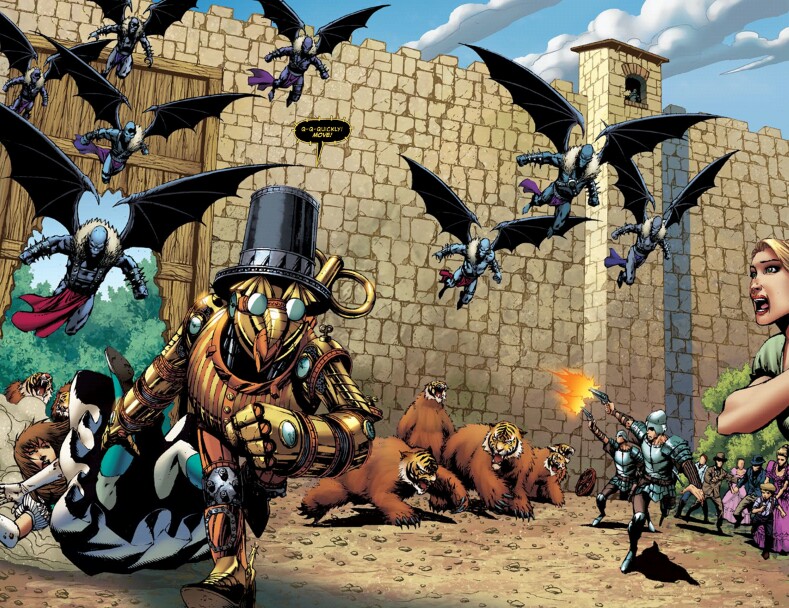