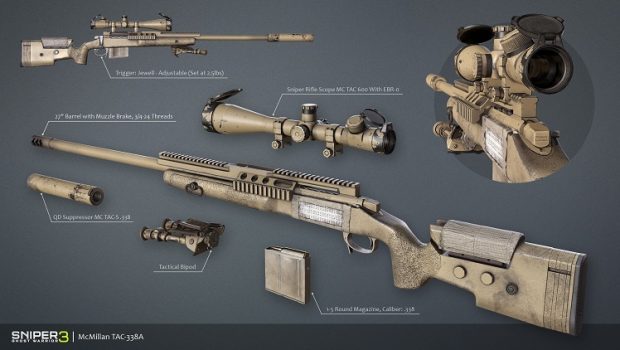 Sydney, 9th June 2017 – CI Games, creators of Lords of the Fallen and the Sniper Ghost Warrior series of games, has announced the next DLC – the McMillan TAC-338A. Based on a real sniper rifle, the McMillan Tac-338A is now available for Sniper Ghost Warrior 3 players as part of the Season Pass DLC for PC, PlayStation 4 and Xbox One platforms. Feel the power of this legendary rifle used by Chris Kyle and test your sharpshooting skills on the field.

We’ve continued to listen to feedback that has been given to us over the course of development for Sniper Ghost Warrior. Sniper Ghost Warrior 3 is without a doubt the biggest project created by CI Games so far. We couldn’t be more proud of the scale we’ve managed to achieve with this project. As a thank you for all the players, we’ve prepared this unique infographic that contains some really amazing facts about the game and its contents.

The size of the game will even go bigger with the upcoming DLC’s planned as our Season Pass, including “The Sabotage” – our next single-player campaign that expands the Sniper Ghost Warrior 3 story.

Sniper Ghost Warrior 3 is out now on the PlayStation®4 system, Xbox One, and Windows PC.