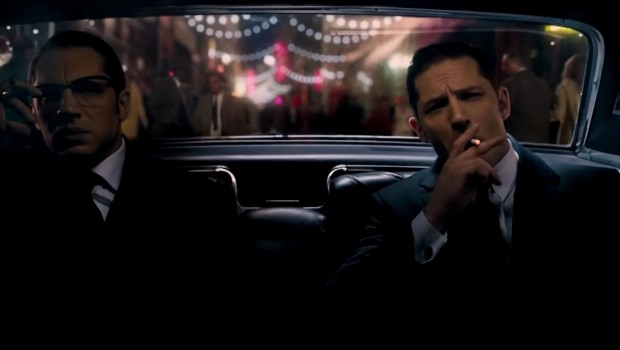 There’s a certain amount of charisma only a cockney gangster can carry—twee rhyming slang one minute and brutal stabbings and shootouts the next. From an outsider’s point of view, it’s easy to forget that these colourful characters are not just mainstays in English crime films but are actually very real people. Among the most recognisable of these criminals were London’s most notorious gangsters Reggie and Ronnie Kray, the twins in crime. The brothers’ exploits have spawned an array of books, films and perhaps most notably, a Monty Python sketch; Legend is the latest biopic of the Krays’ lives. Written and directed by Brian Helgeland, who is best known for writing the screenplays of L.A Confidential and Mystic River, Legend is based on John Pearson’s book The Profession of Violence: The Rise and Fall of the Kray Twins. The film is coupled with enough glamour to befit the cultural icons that were the Krays. Starring Tom Hardy as both Reggie and Ronnie, the story is told through the eyes of Reggie’s young sweetheart Frances Shea, played by Emily Browning. Put the kettle on and get ready for a romp through the Swinging Sixties in the East End of London.

The main draw of Legend lies in the fact that Tom Hardy plays both of the lead roles. While such dual performances are not uncommon on the screen, rarely do they mesmerise to the calibre of Hardy’s performances here. The highly contrasted personalities of each Kray are excellently captured, with Reggie  as suave and dapper as any gangster anti-hero and Ronnie  as a deadpan, psychopathic menace. By being being the main focus, Reggie will be palatable to classic gangster aficionados but there’s enough of Ronnie to appease those who think there’s nothing like a cup of tea and cake after a spot of murder. Legend shines when both Krays are on screen and brighter still when both Krays are going krazy—their inevitable punch-up is the film’s indisputable crowning moment. The duo’s interactions are further boosted by there being little to no fancy trickery employed to create the two Hardys. The keying technique is simple and obvious and  the onus is placed on the performance and the elegant framing to create the illusion.

For a biopic, Legend forgoes large chunks of the Kray’s lives—most noticeably their formative years. Instead, it picks up at the meeting of Reggie and Frances in order to facilitate her role as the film’s narrator. The problem with Frances’ narration is that her character has no part in the most of the film’s depicted events, at least most of the interesting ones. A single scene of banter between the two Krays trumps Frances’ whole downfall from sherbet-popping innocent sweetheart to pill-popping miserable wife. While there is nothing wrong with Browning’s performance, using Frances as a narrator fails as a device and comes across as a Goodfellas (1990) knock-off. Similarly, there are solid performances from the rest of the cast but the storyline picks up with their roles already established. Those uninitiated to the real-world events will likely have trouble keeping up with what is essentially a loose string of repetitive vignettes into the Krays and the dealings of their gang the Firm. Even pivotal players, such as Christopher Eccleston’s Detective Superintendent Nipper Read, feel peripheral to the overall narrative given Hardy’s roles dominate the spotlight.

London’s sights and sounds of the Sixties are presented here in glamour tinted goggles. The Krays’ clubs bustle with trim period costumes and even the hard streets of the East End have a certain razzle-dazzle when Reggie struts down them. There are a slew of locations here but the overarching journey amounts to little more than a series of bar-room brawls. On the whole, Legend is a sleek production but outside of Hardy everything else is, as the film puts it, “like London, not good not bad, it just is.” Those hoping for a unique American perspective on the English gangster genre, with veteran Helgeland at the helm, will likely be left wanting more. The attempts to differentiate Legend from other Kray-related media fall flat, with many of the film’s focus points being frankly uninteresting. However, if you don’t mind a mild dose of cockney slang, read up on the history of the Krays and take a butcher’s hook at Legend. Tom Hardy’s performances are well worth the price of admission.