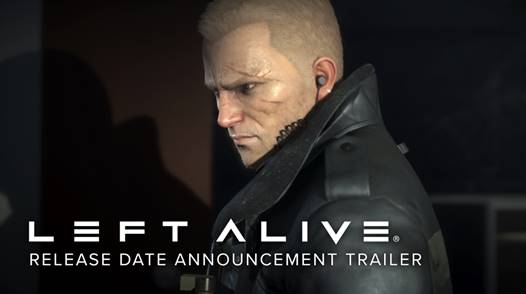 FORGE A PATH TO SURVIVAL IN LEFT ALIVE

SYDNEY, 12th December 2018 – Square Enix Ltd., further showcased gameplay styles and strategies that players can utilise in and out of battle in the upcoming survival action shooter LEFT ALIVE®.

Set in the war-torn city of Novo Slava, a new trailer demonstrates how players must rely on their basic instincts to forge their own paths to survival by utilising stealth mechanics, crafting, traps and more. The dark, gritty setting of LEFT ALIVE also poses challenges to players as they weigh the potential outcomes of their interactions with other survivors, which can help or hinder each other’s chances for survival.

The LEFT ALIVE ‘Find a Way to Survive’ trailer can be viewed at: https://youtu.be/WrMYQMbhTVI

LEFT ALIVE will be available for the PlayStation®4 system and STEAM® on 5th March 2019. For more information, visit: http://www.left-alive.com