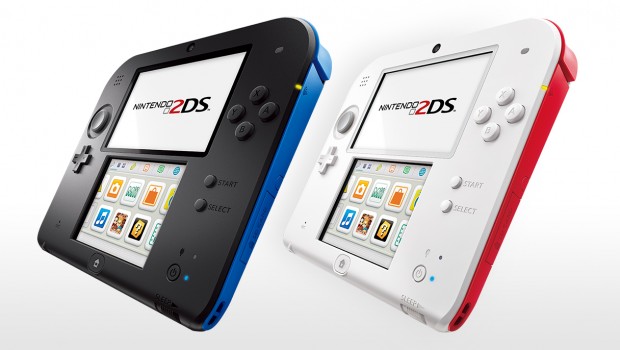 THE LATEST MEMBER OF THE NINTENDO 3DS FAMILY- NINTENDO 2DS ARRIVES THIS WEEKEND!

11th October 2013 – Nintendo is expanding the range of its handheld console offerings with the launch of Nintendo 2DS in Australia and New Zealand with a SRP of AU$149.95. Nintendo 2DS, which will launch on 12th October in 2 colour combinations – Black + Blue and White + Red – is an entry-level, streamlined handheld gaming system that plays all Nintendo 3DS, as well as Nintendo DS games in 2D. The system brings huge software variety and family-friendly value to your handheld gaming options.

Nintendo 2DS retains many of the hardware features of Nintendo 3DS including the same intuitive gameplay controls. It’s also backwards compatible, meaning that you can replay or discover for the first time an already existing library of Nintendo DS games. Nintendo 2DS also comes with the same wireless connectivity features as the Nintendo 3DS like access to Nintendo eShop for digitally-delivered fun and online multiplayer gameplay, as well as StreetPass and SpotPass functionality. A 4GB SDHC Memory Card is also included with the Nintendo 2DS ensuring an expanded storage offering.

The handheld console is taking on a new distinctive fixed slate form design and has been created for those looking for additional variety in their handheld gaming choices. It is an entry point into or a new way to enjoy the Nintendo handheld experience at a value price and will be available for purchase in two distinctive colour combinations, White + Red and Black + Blue. Nintendo 2DS allows you to play all Nintendo 3DS games in 2D, including recently launched games such as Animal Crossing: New Leaf and Luigi’s Mansion 2. Two carrying cases are available to purchase separately too, in either Red or Blue.

Nintendo 2DS is launching on the same day as Pokémon X and Pokémon Y, the next instalments in the world-famous Pokémon series and by purchasing the new system now you’ll be ready for the upcoming, much anticipated 23rd November launch of The Legend of Zelda: A Link Between Worlds.