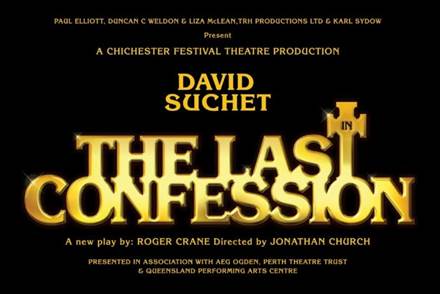 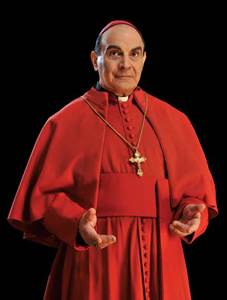 Internationally acclaimed British actor David Suchet will reprise his role on stage in the conspiracy thriller, ‘THE LAST CONFESSION’, in Australia in 2014. The international production will play in Toronto and Los Angeles before arriving in Australia in August. Seasons in Perth and Brisbane were announced late last year and now dates have been confirmed for seasons at Adelaide’s Her Majesty’s Theatre from August 27 and Melbourne’s Comedy Theatre from September 3. Tickets on sale from Friday February 7.

Making his Australian stage debut, David Suchet is an Olivier and Emmy Award winner, BAFTA and Tony Award nominee. He is best known for playing Agatha Christie’s Hercule Poirot having starred in all 74 television movies over 25 years. This is an iconic role that has taken him into the lounge room of millions around the world. Further to his role in Agatha Christie’s renowned series, Suchet has starred in numerous films and television series internationally whilst also maintaining an impressive theatre career. In ‘THE LAST CONFESSION’ he will play the role of Cardinal Giovanni Benelli.

Sure to ignite controversial debate, ‘THE LAST CONFESSION’ is set within the corridors of power in the Vatican and explores the circumstances surrounding the sudden death of Pope John Paul I in 1978. He died only 33 days after being elected and before he could set his liberal reforms into place. Suspicions are aroused when it is revealed that the new Pope had warned three of his most influential but hostile Cardinals that they would be replaced on the evening before his death. The Vatican refuses to conduct an official investigation into the death but the politically savvy Cardinal Giovanni Benelli who had engineered the election of Pope John Paul, is determined to find the truth.

Originally premiering at the Chichester Festival Theatre in 2007 before a hugely successful transfer to The Theatre Royal Haymarket in London’s West End, ‘THE LAST CONFESSION’ is written by first time playwright Roger Crane and has been acclaimed by both the audience and critics alike.

This new tour has been mounted by international producing partners consisting of Triumph Entertainment Ltd (Paul Elliott and Duncan C.Weldon), The Theatre Royal Haymarket and Karl Sydow from the UK and Tinderbox Productions (Liza McLean) from Australia. The cast will be assembled from the UK, Canada, USA and Australia under the direction of Jonathan Church (Artistic Director of the famous Chichester Festival Theatre).

Jonathon Church, recently in Australia holding auditions said, “What I find particularly exciting about this production is its international dimension. We are bringing together an American writer, a British creative team, an International producing team and an Australian, Canadian, American and British cast of 20 actors to deliver this exceptional new play.”

Rehearsals commence in London with the tour starting in Toronto at the Royal Alexandra Theatre and Los Angeles at the Ahmanson Theatre before transferring to Australia with additional tour dates to be announced.