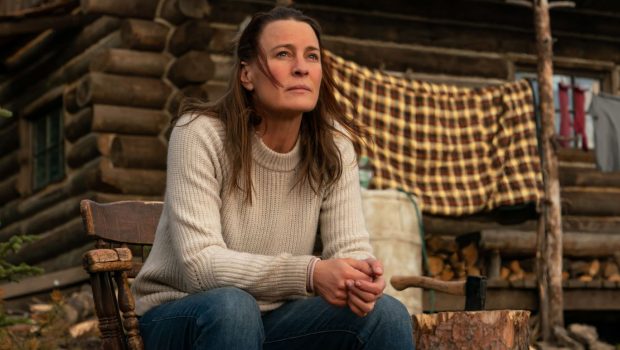 Strong cinematography and humane performances fail to salvage Robin Wright’s feature directorial debut from sentimentality and a terrible screenplay. Her work behind the camera is complemented by being the film’s star and executive producer. However, her decision to allow first-time writer Jesse Chatham and Erin Dignam, her long-time collaborator, to develop the script proves fatal. Their derivative premise of a white woman finding solitude in the wilderness echoes several strong films, including Tracks (2013), Wild (2014), and, most recently, Nomadland (2020). The setup is a well-worn metaphor for reconciliation, independence, and grief. Wright’s ex‑husband, Sean Penn, explored a similar narrative in the stellar drama Into the Wild (2007) but with a male lead. Opting to revisit this subgenre requires imagination and new insights into the characters. Sadly, Land recycles once moving themes and undercuts them with cloying earnestness and sentimentality verging on parody. The film’s only agreeable moment is when Wright’s character thrashes on the ground and squeals, ‘this isn’t working!’

The meagre plot opens with Edee (Wright) undertaking a therapy session. She tells the therapist, ‘it’s difficult to be around people because they want me to be better’. Her depression sees her ignore an urgent call from her sister, Emma (Kim Dickens). Instead, she throws her phone in the bin. She then purchases her own supplies and leaves town for a log cabin in the woods. Edee has no survival skills and finds herself relying solely on the canned goods she has purchased. Faint imaginings of her husband and son infer a once happy life. These emotions are countered by a brief flashback to a conversation with Emma where Edee suggests she is suicidal. Back in the woods, her struggles are realised when she is forced to hide from a black bear. It trashes the inside of her cabin. Later, she collapses from exhaustion but is found alive by two people, a nurse named Alawa (Sarah Dawn Pledge) and Miguel (Demián Bichir). Alawa wants her hospitalised, but Edee refuses. She also assures Alawa she is not a criminal in hiding. Despite some initial protest, Miguel continues to visit and brings his dog. He also provides supplies and teaches Edee survival skills. It marks the start of a gentle friendship over two years.

Land’s screenplay is a limp first draft that was not ready to be filmed. The most visible shortcoming is that there is barely enough plot for half a film. The narrative is akin to a middling short story. The threadbare plot is evident from how frequently Wright examines the scenery instead of urgently pushing the story towards a gripping endpoint. Land is also undermined by its disregard for meaningful obstacles and challenges. The bear scene and Edee’s collapse are the only points of tension. Otherwise, this is safe, dull, and predictable filmmaking. It is entirely devoid of punishment and suspense. The most telling example of its mawkish approach is its failure to interrogate its central conceit. It never probes how or why a white woman in today’s economy is privileged enough to upend her life and live alone in the woods without work or responsibilities. Rather, Edee is fortunate to be continually serviced by a polite Mexican man who challenges her desire to be isolated through kindness. At one point, she tells this guardian angel that she wants to notice things more. Ironically, Land is completely devoid of self‑awareness regarding its condescending racial dynamic that exists to dilute her individualism.

Furthermore, Wright is disinterested in building personal conflict between Edee and Miguel. They are never romantically attracted to each other, which is fine, but they never fight either. The rapid progression of their friendship deprives Land of tension regarding Edee’s removal from society. The dramatic hollowness would be less problematic if the dialogue did not waver into bland statements. In one sparkling exchange, Edee asks, ‘why are you helping me?’ to which Miguel bluntly replies, ‘you were in my path’. The two also share polite conversations about pop culture, including Star Wars (she calls him Yoda at one point; yes really), and practice singing Tears for Fears’ song ‘Everybody Wants to Rule the World’. Their pleasant (boring) friendship extends into an education plot where Miguel teaches her hunting skills but without setbacks. The only sliver of tension is that they are unwilling to reveal their personal scars. When Miguel finally shares his story, it is a predictable, eye-rolling confession. Meanwhile, Edee’s source of grief is hastily revealed at the end. It is flimsy and poorly constructed, suggesting the screenwriters never developed her backstory. Between the dull exchanges are laughably earnest moments. The wimpiest ones include Edee placing little family pictures on her cabin wall and telling Miguel, ‘you made me want to live again!’ Land’s emotional strings are so transparent, obvious, and wooden that it is impossible to take its postcard filmmaking seriously. 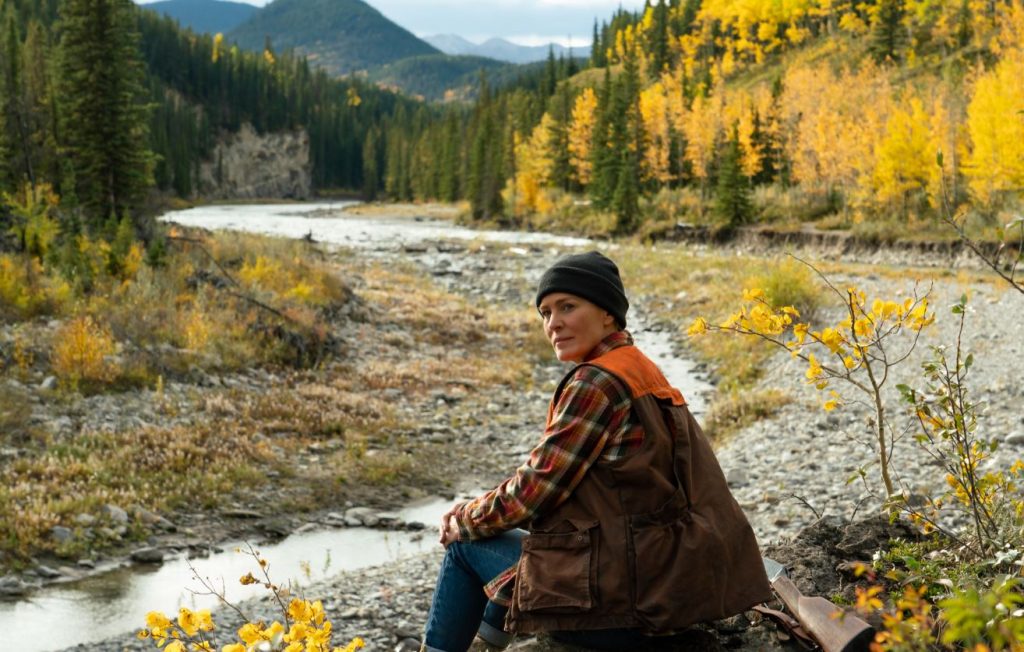 The film’s most appealing element is the gorgeous, naturalistic cinematography by Bobby Bukowski (The Messenger, 2009). Visually speaking, this is an undeniably handsome film. Its glorious form is courtesy of the beautiful scenery in Alberta, Canada, and the decision to shoot in the slightly narrow aspect 1.66:1 ratio. The naturalism on display is stunning, particularly the depth of the tall, green woodlands and the gentle streams of water glistening peacefully. Sometimes the trees are covered in dense snow too and there are attractive shots of Edee hidden under deep shadows as if to illustrate her social detachment. It is a pity the incredibly gorgeous setting brings no heat to this tensionless film. After Edee’s early collapse, the frosty elements never trouble her again. Outside of the visuals, Wright makes critical missteps. The ghostly images are a visual cliché that prematurely signpost Edee’s grief. Similarly, the soundtrack underlines every emotion with grating strings. Wright’s biggest mistake is undoubtedly utilising a weak screenplay that dilutes the story’s tension.

Wright and Demián Bichir’s naturalistic performances are undermined by the lacklustre material. Wright has been a strong actor for years, particularly in Forrest Gump (1994) and the gritty television series House of Cards (2013). Her solid performance predictably expresses Edee’s feelings of loss through her long, muted gazes. The lingering close-ups always catch the tears welling in her eyes. However, the film pushes so hard to feel for Edee without exploring her personal history in detail or originality. Rather, she is an archetype of the isolated woman borrowed from superior films. She stresses her content for loneliness by stating the obvious. ‘I’m here because I don’t want to be around people’, she says. When Edee reveals her heartache, the timing of the revelation and the disclosure are mechanical and perfunctory. Consequently, Wright’s performance is not as affecting as it should be. Bichir is disarming and kind, but the part is a missed opportunity for someone stranger and more ambiguous to amplify Edee’s distrust. Without this complexity, the screenwriters utilise cliches and melodrama to define Miguel. It results in some disastrous final moments. If both parts were written with sharper edges, Land could have explored richer thematic avenues for its characters. 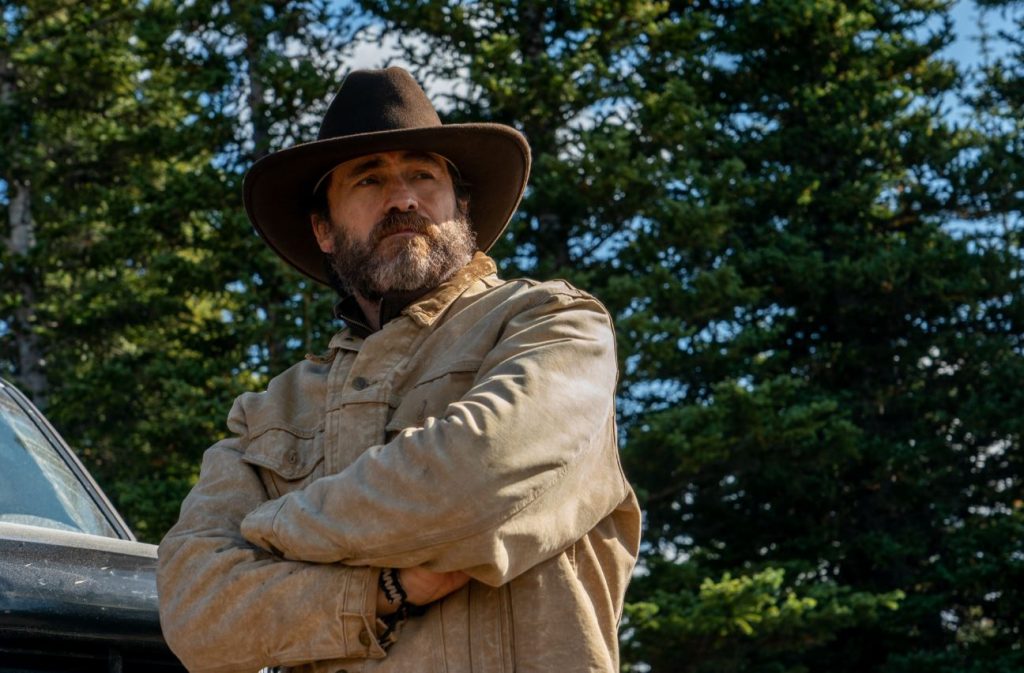 While benefitting from stunning scenery and solid actors, the lack of drama between Land’s characters reduces its engagement. The story is too content with pleasantries and pales compared to similar parables about women lost in the wilderness. We must also ask why this same type of story is being retold time and again. Anyone curious about Land would be better served watching Nomadland. The deftness of Chloe Zhao’s film is masterful and further amplified after watching this overly earnest dreck. The painfully obvious schematics work overtime to tell us how to feel without ever establishing nuanced characters. It might appeal to those who avoid challenging cinema. Otherwise, Land is a predictable slog that frees itself from meaningful personal conflict long before its corny finish.

Summary: While visually impressive, Land is marred by a lack of personal conflict and a terrible screenplay.