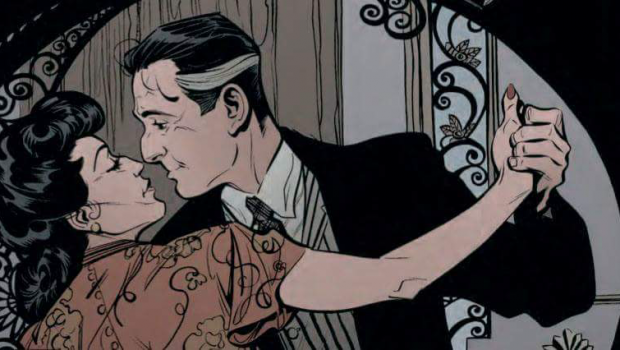 Summary: Lady Killer 2 #3 delivers another entertaining and grotesque issue to this series.

In this issue of Lady Killer, we learn more about Irving’s dark past and how he is connected to Josie’s mother-in-law. Up until this point, things have been progressing smoothly, however, some troublesome news about her business partner may jeopardise that and we’ll see Josie forced to make a decision she’d much rather avoid. Even assassins have ethical standards! 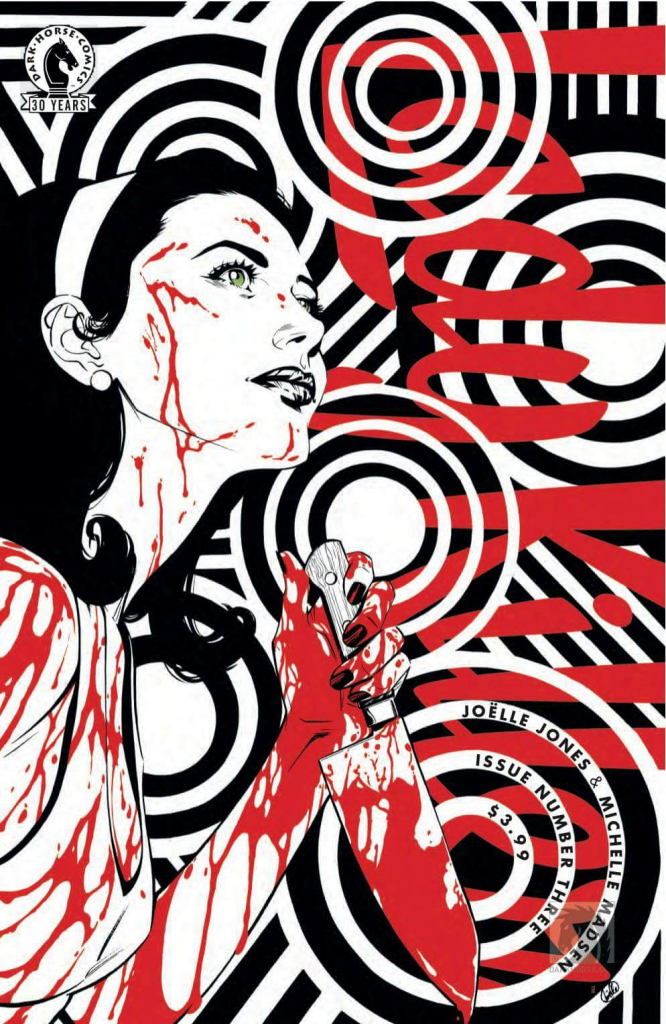 Lady Killer 2 #3 begins with Josie doing what she loves best: her job! She reflects that things have been excellent since partnering with her old acquaintance, Irving, and that by hiring him as her disposal guy that she has much more free time to spend with her family. I mean what could possibly go wrong? Of course, when you’re a stay-at-home mother and wife who moonlights as an assassin there are a lot of things that can go wrong. Step in trouble in the form of an old reunion between Irving and Josie’s mother-in-law, of all people. Mother Schuller’s behaviour after seeing Irving in her house quickly prompts Josie to question why she is acting so aggressively towards him. This is where we learn a whole new and unexpected history to this grand old dame. She was a Civil Service Officer during the war and was ordered to investigate Irving over some suspicious activities. This is where a shocking and dark secret about Josie’s business partner is revealed, alongside information from the Union relating to his past unethical work standards, Josie must make a hard decision. Is he too much of a dangerous liability? 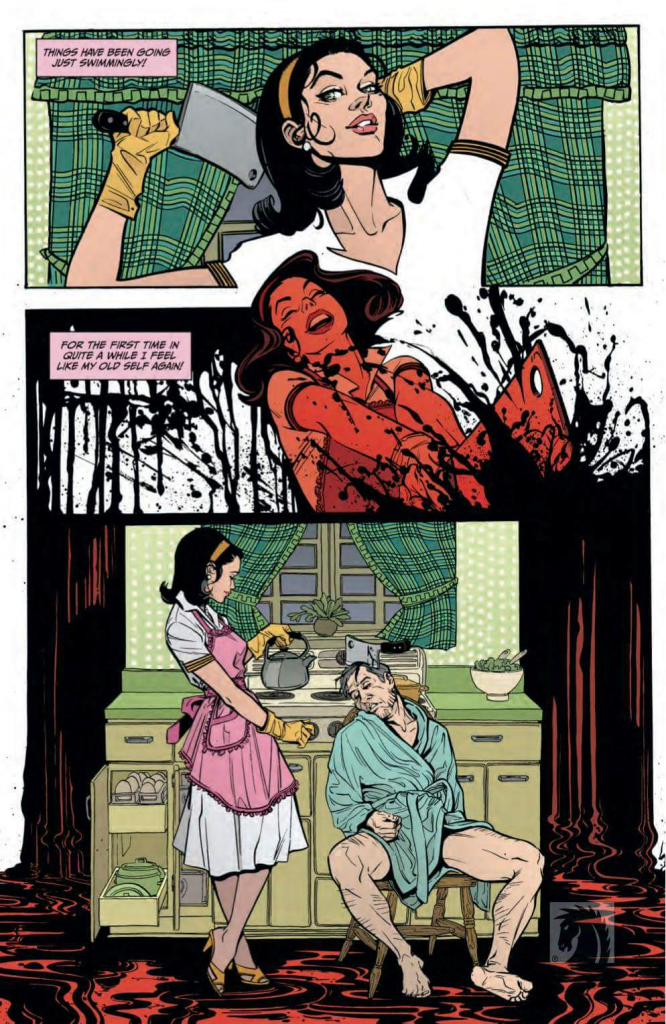 Joëlle Jones has created such a dynamic and complex character in Josie. She lives a life of contrasts and this also applies to her personality. Clearly a thoughtful and kind woman towards her family, she is also a brutal and ruthless killer. It makes for one of the most interesting and surprising leading ladies I’ve encountered. I think she’s excellent! What’s also really interesting is seeing Josie reject and throw aside her predetermined role as a subservient housewife. This is still very much a time where women had defined roles at home and were expected to accept this, and from the outside Josie appears to adhere to these roles, however, the reality of her dual life is quite the opposite. I can sense that Jones likes to create strong and commanding women, as I find the women that possess these characteristics are by far so much more interesting and complex. Take for example Mother Schuller, a woman who worked as an investigator during the war, someone who is passionate, brave and determined…let’s just ignore her political background for the moment. Her story that we learn about in this issue is incredibly important and interesting and reflects the diversity of women that Jones likes to create. She, like Josie, plays an important role in this story and is more than just a background accessory. I must also applaud Jones ability to nicely tie in the very dark subject matter of this story with a lot of black humour. It fits perfectly and doesn’t feel forced or like it doesn’t belong. 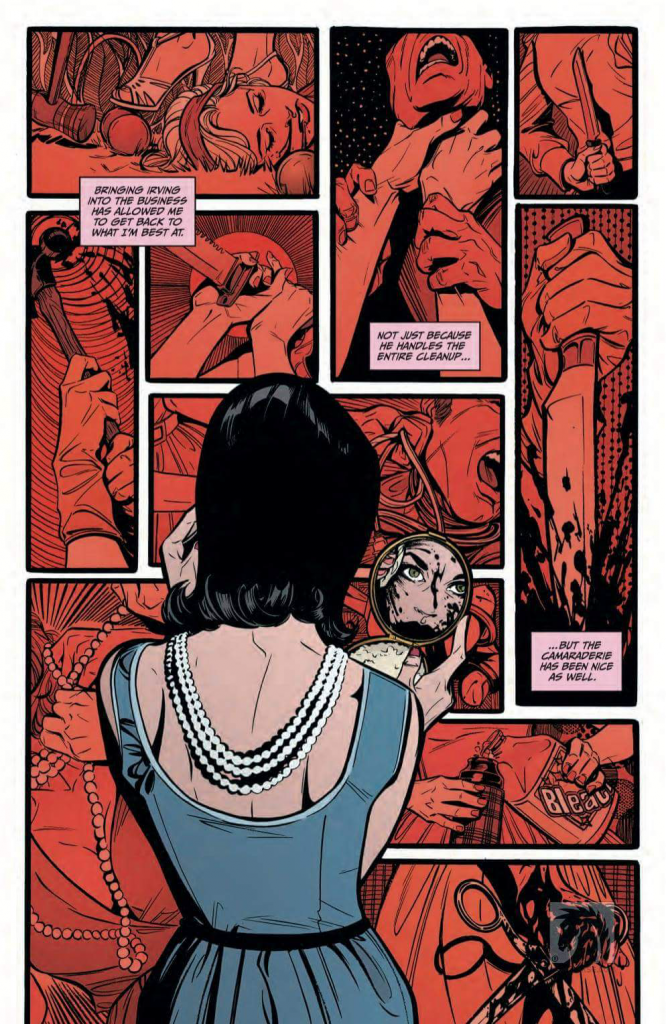 Joëlle Jones both writes and draws the art for Lady Killer as well. She has really got that early 1960’s aesthetic spot on. It looks and feels like a period piece, filled with retro charm and vintage kitsch, which contrasts perfectly with Josie’s dark side. Some of my favourite panels are those where we get to see Josie, looking immaculate in her dress and pearls, surrounded by horrific scenes of death, blood and gore. It’s very polarising to look at and even though it’s incredibly grotesque it’s also somewhat comical as well. This is also an effective tool in offsetting the gore, otherwise you could possibly feel like you’re looking at the aftermath of a serial killer muredr spree. Jones is also an excellent visual storyteller. She effectively layers images over one another, as a way to visually portray a narrative on a single page. It not only looks good and is filled with lots of detail but it’s also a clever way of condensing a lot of content that could be overwhelming. Colourist, Michelle Madsen, uses a retro-like colour palette, reinforcing the overall early 60’s look of Lady Killer. She also cleverly uses a red filter over the pages that contain a lot of gore. This is both visually striking but also effective in drawing your attention to the elements on the page that are coloured differently. 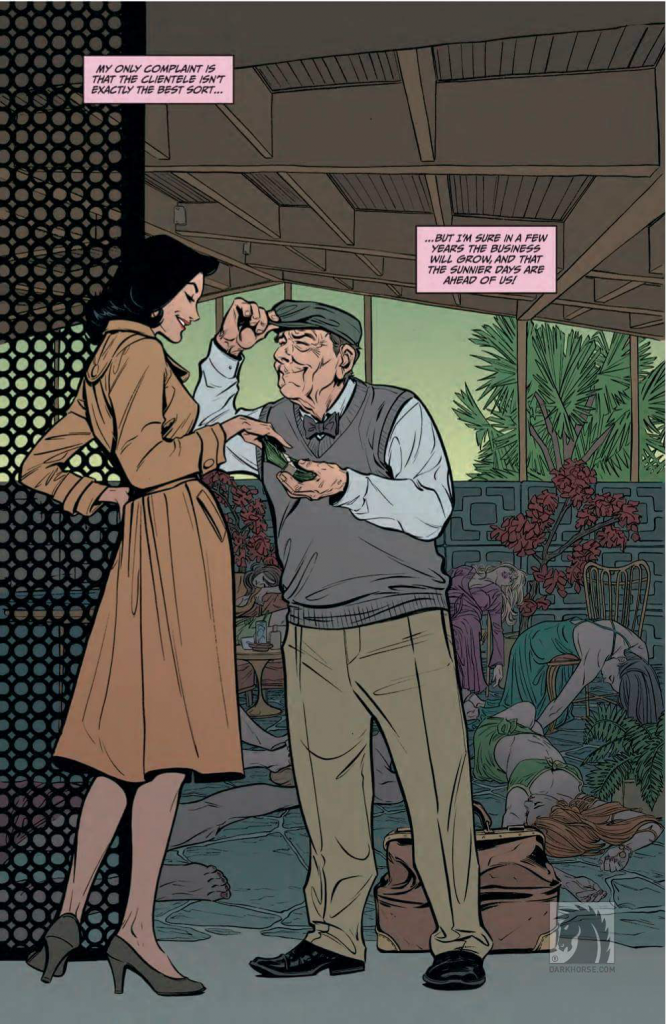 Lady Killer 2 #3 delivers another entertaining and grotesque issue to this series. Full of twisted, dark humour and shockingly brutal murder, it’s hard not to enjoy this series and completely love Josie. I’m curious to see what decision Josie will make and how it will impact her life, and whether it will be for better or worse. Do yourself a favour and grab yourself a copy ASAP!