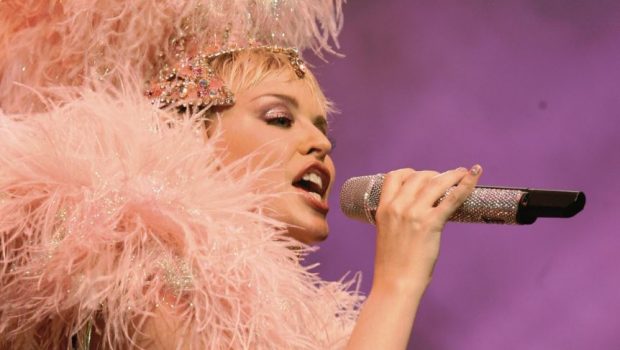 To see a video message from Kylie about the announcement, please click on the link below:

“Touring and live performance has been such a big part of my life and my development as an artist, so I’m thrilled that Arts Centre Melbourne are staging this free national exhibition. I’m excited for fans to get up close and personal with my costumes and to get a glimpse behind the curtain to see some of the design process,” said Kylie Minogue.

The free exhibition is drawn from Kylie’s spectacular stage wardrobe held at Arts Centre Melbourne’s Performing Arts Collection and features costumes from tours dating back to 1989 as well as more recent tours such as Kylie Aphrodite les Follies in 2011. Featured designers within the world-first exhibition include Dolce and Gabbana, John Galliano, Julien Macdonald, Karl Lagerfeld and John Paul Gaultier as well as local designers including Peter Morrissey and Mark Burnett.

“Kylie is one of the most loved performing artists in the world and a true icon of fashion, music and popular culture, This exhibition celebrates her success, her stagecraft and the creativity that goes into her costumes and shows,” said Martin Foley, Minister for Creative Industries.

“The last time Arts Centre Melbourne staged an exhibition of Kylie’s costumes, over a decade ago, it attracted almost 300,000 people locally, and went on to become one of the most visited exhibitions at the V&A in London. With even more spectacular costumes, Kylie On Stage is set to be another big drawcard for our creative state,” he added.

The exhibition has been made possible through a large donation by Kylie to Arts Centre Melbourne’s Performing Arts Collection, the nation’s leading specialist collection documenting Australia’s circus, dance, music, opera and theatre heritage.

“We’re thrilled to be opening up the treasures of our Performing Arts Collection and provide a rare opportunity for Kylie’s legion of fans to go behind the scenes and see first-hand the hard work that goes into creating the on-stage magic” said Claire Spencer, Chief Executive Officer, Arts Centre Melbourne.

The exhibition will be approached chronologically with themed areas that reflect the development of Kylie’s stage persona throughout her career. Kylie On Stage will also feature a selection of designs, working drawings, photographs and footage that explore the creative process behind each costume and provide rare glimpses into the world backstage.