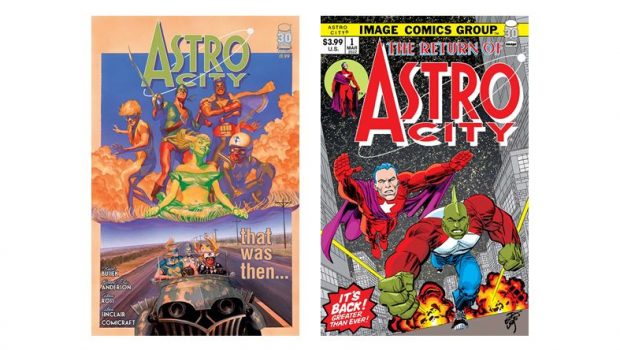 KURT BUSIEK, BRENT ANDERSON, ALEX SINCLAIR & ALEX ROSS TEAM UP FOR ASTRO CITY: THAT WAS THEN… ONE-SHOT THIS MARCH

Bestselling creative team Kurt Busiek, Brent Anderson, Alex Ross, Alex Sinclair, and Comicraft team up for the return of Astro City in an all-new special out from Image Comics this March—the Astro City: That Was Then… one-shot.

And a host of top Image creators welcome the series back to Image—where it all began—with a stunning lineup of variant covers by Erik Larsen, Marcelo Costa, Leandro Fernández, Jamie McKelvie, Chip Zdarsky, and Rob Guillory.

These highly collectable covers bring Astro City characters together with popular classic and current Image Comics series, including Savage Dragon and Samaritan, Radiant Black and the Confessor, The Old Guard and Cleopatra, Beautie in full The Wicked + The Divine style, Quarrel and Crackerjack in a Sex Criminals homage, and Tony Chu and the First Family’s Rex in a Chew-style trip to Beefy Bob’s.

Astro City: That Was Then… features new and existing heroes and launches a mystery that will drive the forthcoming Astro City series. Who were the Jayhawks? How did they inspire five teen sidekicks looking for answers to hit the road in a rickety crime mobile in 1969? And how will this affect Astro City in the present? It all begins here. And don’t miss the Astro City Metrobook, collecting the first three years of the acclaimed series!

The Astro City: That Was Then… one-shot will be available at comic book shops on Wednesday, March 30.

Astro City: That Was Then… will also be available for purchase across many digital platforms, including Amazon Kindle, Apple Books, and Google Play.