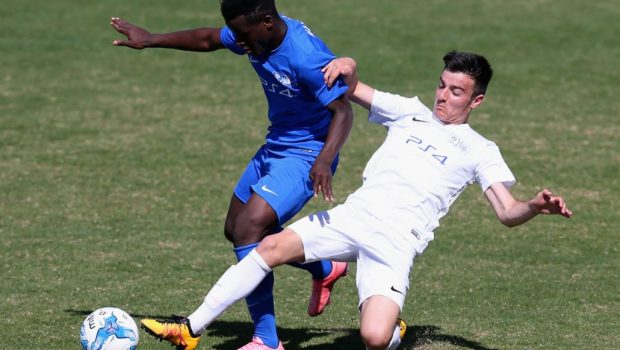 Sydney, September 28, 2016 – Kristian Trajceski from Hume City FC will commence a two-week trial with Sydney FC’s Youth League side after being crowned the inaugural winner of the PS4™ Player Pathway Award.

The opportunity for Trajceski to trial with Sydney FC’s Youth League side comes as part of the PS4 Player Pathway Award, a season-long search to find the most talented young footballer in the country and provide them with an opportunity outside of the existing football pathway.

After keeping a watchful eye over all 24 players throughout the two-day camp, the decision on the winner was still very much in the balance leading into the final practice match on Wednesday. After a lengthy deliberation process post-match, a decision was made and Kristian Trajceski from Hume City FC was awarded the inaugural PS4 Player Pathway Award.

Trajceski will now join the Sydney FC Youth League side on a two-week trial, commencing in October, where, if selected, will be presented with the opportunity to be signed onto the team on a permanent basis.

Trajceski impressed the judging panel over the course of the two-day camp, particularly in the final practice match, where his composure on the ball and ability to find free space separated him from the other finalists.

‘Winning this award means a lot and I am grateful for the opportunity and the experience of the past 2 days. I’m really looking forward to the trial with Sydney FC’s Youth League side and to show my ability at a higher level”, said Trajceski.

Sydney FC Youth League Head Coach, Rob Stanton, was thrilled with the decision and is looking forward to seeing how Trajceski performs in the upcoming trial, “I’m very keen to see how this boy fares against my current group of players, considering the current group have had 15 months learning of the playing style”, said Stanton.

“He has shown characteristics of what I am looking for in a player for his position”, Stanton added.

Michael Ephraim, Managing Director of Sony Interactive Entertainment Australia, was on hand to present Trajceski with the inaugural PS4 Player Pathway Award. “On behalf of the team at PlayStation Australia, I’d like to extend our congratulations to Kristian Trajceski. I’m sure all our partners will agree that it’s incredibly rewarding to see the final result of a season’s search to uncover the best up and coming football talent and to offer them a helping hand to realise their football dreams.”

All coaches and scouts from each Hyundai A-League club were invited to attend the PS4 Player Pathway Award Camp.