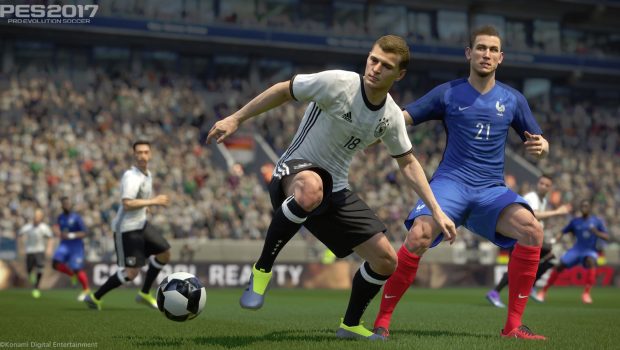 Sydney, 27th July – Konami Digital Entertainment B.V., creator of the award-winning PES series of football simulations, has announced a top-level partnership with FC Barcelona, the first of its kind for a video game publisher.

“This is a real statement of intent for us,” explained Tomotada Tashiro, President of Konami Digital Entertainment B.V. “By working closely with a team of Barcelona’s stature we can introduce the PES series to a huge global fan base. This partnership will deliver access to the very best players in the modern game and to one of the world’s most respected and ambitious clubs. The PES series is famed for its realism and control, so the fit between such a skilled team and a game that celebrates such ability is perfect.”

KONAMI and FC Barcelona has entered a Premium Partner agreement, which will see KONAMI granted extensive access to the club’s stars and have a visible presence within the match day experience. KONAMI will have a prominent advertising presence within and around the club’s Camp Nou stadium, and will also receive exclusive rights to recreate FC Barcelona’s legendary home within its PES titles, starting with PES 2017 and within all related PES-branded releases, including mobile titles.

“We are delighted to have signed this agreement with KONAMI, who is now an official Premium Partner of the Club” added Manel Arroyo, FC Barcelona Vice-President of Marketing and Communications. “KONAMI is a strategic partner that will allow us to bring FC Barcelona to millions of users of its game. We hope to see the club, the players and Camp Nou, perfectly recreated in the next and future versions of the PES series.”

FC Barcelona was founded in 1899 in Barcelona, Catalonia. The team is widely known to fans by their nickname ‘Barca’, and since their formation has won the UEFA Champions League five times, the Spanish League 24 times, and many other honours. FC Barcelona is one of the best-supported clubs in the world, with almost 145,000 Socios, (members) and the top sport club on social media, with nearly 250 million followers. FC Barcelona will also be represented faithfully within the series, with KONAMI’s proprietary Team ID and Player ID systems used to ensure the PES side perfectly reflects the overall and individual playing styles of the Catalan side and its many stars. The club’s famed ’offensive, playing style will be fully implemented, as will the club anthem ’Himno‘. Konami will also be using advanced 3D photo-scanning techniques to implement the faces and expressions of key players, and will also release in-game versions of the club’s historical kits for use in the games. There will also be special promotions within its hugely popular myClub mode that will allow fans to add Barca stars such as Lionel Messi, Neymar Jr and Luis Suarez to their home-grown squads. In addition PES 2017 will include FCB Legends also available in myClub.

The agreement comes as KONAMI builds up to the September 13th/15th launch of PES 2017, the already acclaimed latest iteration of the 21-year-old series. PES 2017 is founded around the ‘Control Reality’ ethos, elevating the series’ award-winning gameplay to a new level through incredible new control elements and a new standard of visual realism, without sacrificing what made PES successful in the first place: playing a match with your friends. The industry-leading Fox Engine is again central to elevating the series to new heights, with KONAMI focusing on first touch, the making and receiving of passes, and adaptive AI to elevate the game’s acclaimed realism.