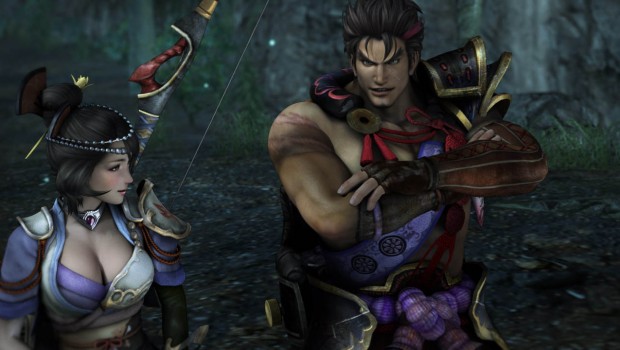 KOEI TECMO EUROPE has revealed exciting new information and additional features for ‘Toukiden: Kiwami’, the demon slaying epic currently in development for the PlayStation®4 and the PlayStation®Vita, which will be released on 26th March 2015.

‘Kiwami’s’ new story starts three months after the conclusion of the original Toukiden with a detailed introduction into the intricate hierarchy of the Slayer organisation. Players are introduced to an elite slayer unit, ‘the Hundred Demon Corps.’ and their heroic Captain, Soma. Soma has made a name for himself during the wars of the Awakening and is now leading the Third Company to the Utakata Village to re-enforce their resistance against Oni coming from the north. His weapon of choice is an enormous spiked club and he wields it with such bravery and conviction that it has earned him the unwavering loyalty of his men.

With him travels Reki, a young slayer with an uncanny proficiency in the naginata. Reki was sent from the Village of Shiranui to join the ‘Hundred Demon Corps’ and has quickly proven herself composed, focused and cool in a fight.

The last of the new Slayer characters that join the roster in ‘Toukiden: Kiwami’ is the sweet yet mysterious Horo; a girl with little memory of her past who suddenly appeared in Utakata and took up the fight against the Oni. Horo brings with her an exciting new weapon addition to the Toukiden armoury: an oversized rifle. Despite its size, the rifle is a weapon of great strength and accuracy and it provides a great long-ranged alternative to bows as it fires both rounds and grenades.

Apart from the new weapons and character additions, ‘Toukiden: Kiwami’ also includes an increased number of Mitama (300 in total, up from 200 in the previous title). Mitama are the freed souls of fallen heroes who remain to assist the slayers in their fight. The souls can be equipped by the player and their powers can be upgraded up to 12 levels (two more than in ‘the Age of Demons’). Fully levelling up a Mitama gives access to extra boosts and powers that will help the player survive through the challenges of the treacherous hunts.

In the deeply rich world of Toukiden, Demons (Oni) have always hid in the shadows and aimed to torment mankind. Through history, a secret caste of warriors, the Slayers, have been trained to dispose of the demonic threat before it could consume the world. However, an event called the ‘Awakening’ caused rifts to appear in space and time. Through those rifts places that had long disappeared from the world resurfaced, and with them came hordes of various demons that started to relentlessly hunt humans.

As the extinction of humanity was not far from becoming reality, the Slayers opened their villages as sanctuaries to protect those who had escaped, and provide a last line of defence against the horror.

Toukiden’s original storyline starts 8 years after the Awakening and follows a newly trained Slayer from the village of Utakata (enter: the player!). The player’s role is to complete various missions, strengthen relationships with the other warriors in the village and eventually start battling the largest of the Oni to banish them back to their dimension (a mysterious demi-plane that stands between space and time) and free the souls of the heroes they’ve trapped.

Set against a backdrop inspired by various historical periods of Japan, ‘Toukiden: Kiwami’ tells the tale of humanity’s last stand for survival. As it makes its debut appearance on the PlayStation®4 computer entertainment system, ‘Kiwami’ picks up the story from the beginning, allowing new players to familiarise with its vast, demon-ridden world. Nevertheless, it is almost double the size of the original game, offering fans of the series the opportunity to pick up where ‘Age of Demons’ ended and follow their slayer into a variety of new, exciting adventures.

Visually stunning, this game boasts an extensive character creation mode, a multitude of new and returning weapon types; each of which can be forged and upgraded to the player’s preferences, while it also features 300 characters based on both fictional and historical Japanese figures, whose souls help players strengthen their team and defeat their enemies.