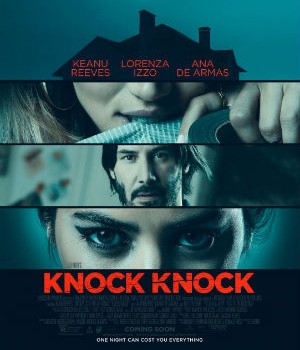 Summary: An attempt at Fatal Attraction for the social networking generation.

I want to start this by saying that I stand against the tide and will openly admit that I like Keanu Reeves, I think his image has been hampered by some early roles but that he has the capacity for captivating performance. I appreciate that Keanu takes on some unique projects and they can produce some great entertainment… then there’s Knock Knock.

The film starts with Evan Webber (Keanu Reeves) trying to get some alone time with his wife Karen (Ignacia Allamand) on his birthday, only to be interrupted by their children… it all comes across as a bit heavy handed in showing us that he is a family man. After stressing the point some more Karen and the kids leave and Evan is left home alone to work on his latest architectural project. As the evening comes Evan has been working hard and needs some “relaxation”… opening a draw he finds he and Karen’s stash of “herbal relief”. Moments later there are two young attractive ladies at the door drenched to the bone, no umbrella and apparently no charge on their phones and therefore no way to contact a cab to take them where they wanted to go (they had apparently given the wrong address and are in fact across town from where they need to be). 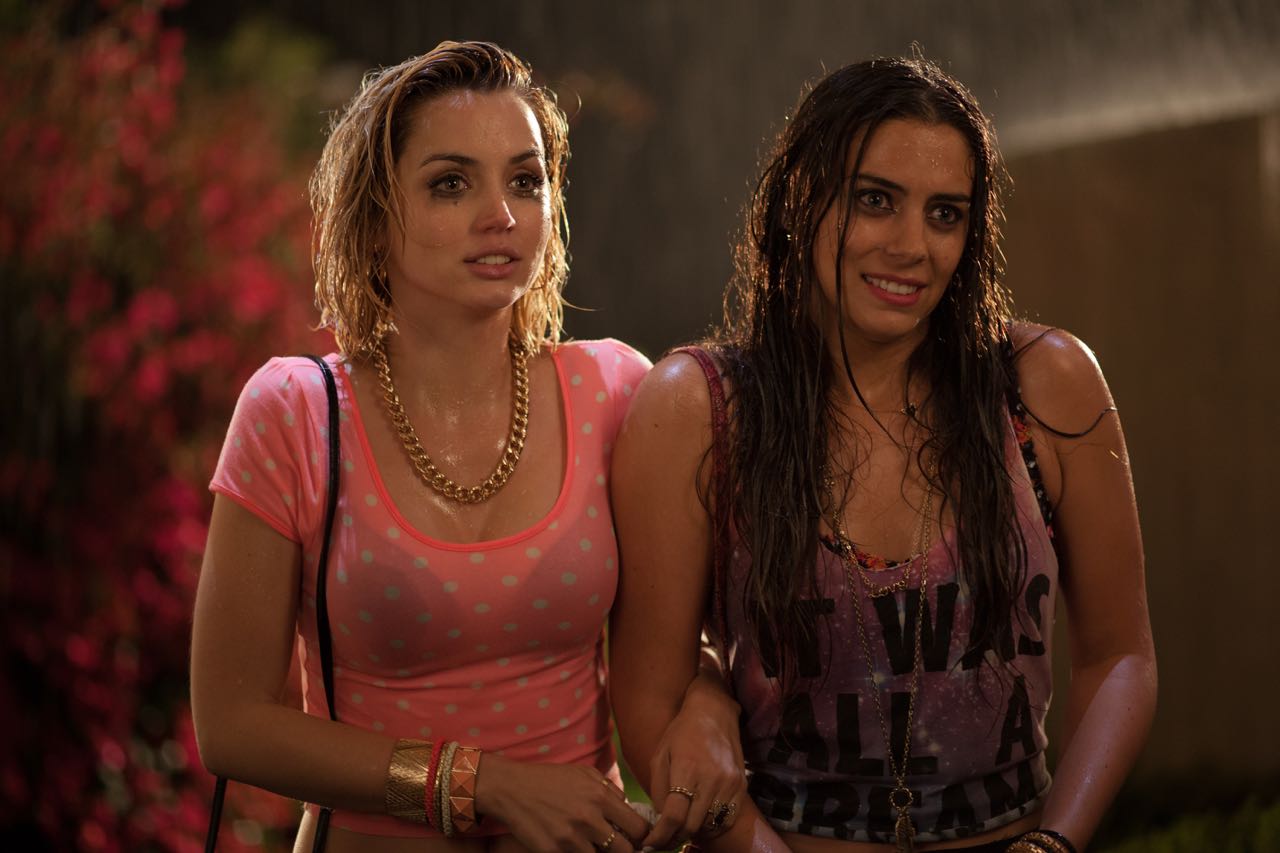 We are now subjected to a very protracted “seduction” by the girls… the problem is it is neither subtle nor overly enticing. We hear hints of a former life for Evan, one in which he was apparently a quite successful DJ, with a longing for days past in his demeanour the girls ramp up their game and as the presumably Uber driver gets ever closer the tension (should) mounts. The car arrives and Evan has to go and find the girls, naturally they are both in the bathroom naked and they insist he come and join them… this is the point at which Evan’s life changes irreparably.

The next morning Evan wakes to find the girls have made themselves extremely comfortable and “at home”… this is also the point at which the pain of viewing this film really sets in… not in a “oooh that’s scary” thriller type manner… but in a “these girls are infuriatingly annoying and childish.”… sense. But they don’t just antagonize Evan… they begin to get aggressive and Evan slowly discovers just what he has unleashed. 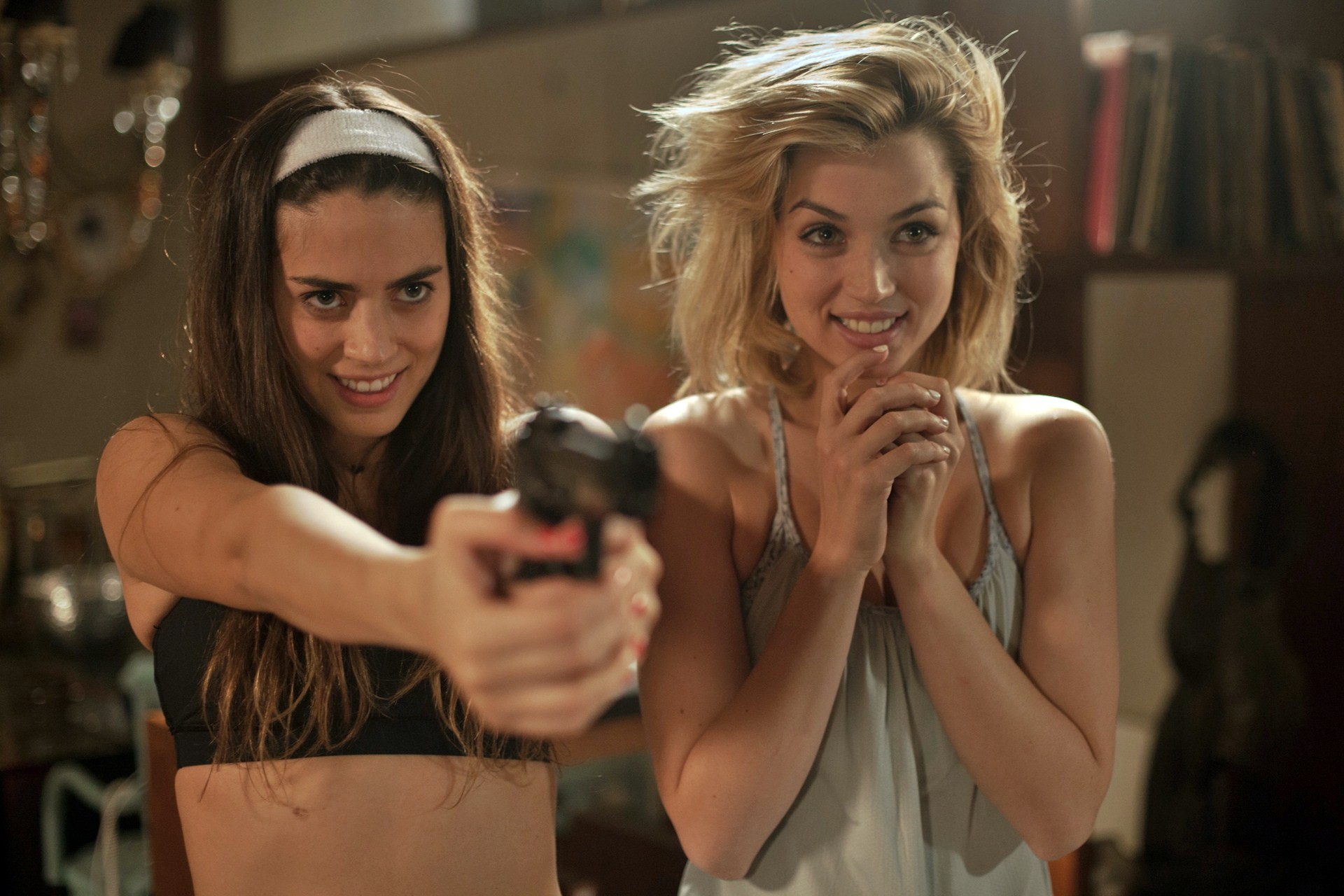 Upon watching the extra features in which the principle cast are asked about their experience with the film/ing we learn that they are under the impression that this is a modern take on Fatal Attraction… I would say that is being overly generous to this film. Fatal Attraction featured a believable situation of two people meeting (one happening to be married) and having an affair… when he realised he had made a mistake the married man tried to call it off but the lady had become obsessed and arguably psychotic which played out in a disturbing but believable manner. Knock Knock features a married man who we are told in no uncertain terms is feeling deprived in a certain department… two girls show up out of no where, seduce him then rip his life to shreds with no significant attachment to him other than they had been spying on him. For me it doesn’t ring true and as mentioned earlier… the girls just behave in a manner that is so annoying that it makes it quite a strain to watch. Perhaps I’m not clever enough to see the deeper messages here or the hidden philosophical ponderings, it really seemed more like the result of someones psychoanalysis “that’s right doctor… my dream starts with this sexy young girls and they want to have sex with me… but then I think my guilt kicks in and the dream ends with them destroying my life.”

The film is directed by Eli Roth (husband of Lorenza Izzo who plays Genisis, one of the two girls who show up to terrorize Evan) whose pedigree is shock horror fare such as Hostel and Cabin Fever and given that his father Sheldon Roth is a world renowned psychiatrist/psychoanalyst there may be an element of that upbringing that crept into the script. I appreciate his use of more traditional cinematography, basically the avoidance of jump cuts and “shaky” cam, but the story here just doesn’t work for me though I do suspect that his genre of films are not my style to begin with… perhaps those with a love of slasher films and the like might be more inclined to find this story enjoyable… for everyone else… don’t answer the door to Knock Knock.