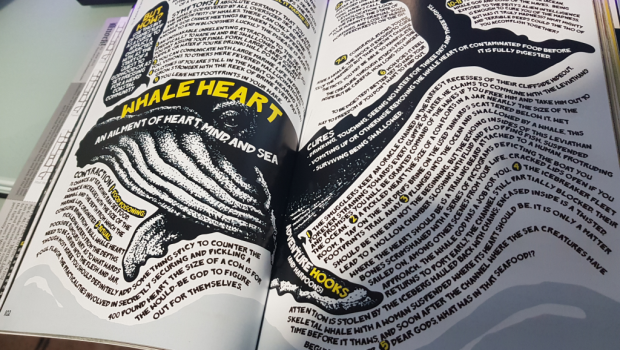 Summary: While you will get more out of this if you are already into D&D and role-playing, it is still worth a look for storytellers and people looking to get into writing for ideas of how to progress your own stories. A surprise around every corner.

Roll a d20 and turn the page

Being a Compendium of Miscellanea for using with old-school Role Playing Games.

One of the things that I never got to do growing up was play Dungeons and Dragons, there was one group playing it at school but they didn’t want to let anyone in. I did have the HeroQuest board game and the expansions but it was more action-based. I would always hear about it and the people talking about the moral panic it caused in the 1980s.

This magazine is aimed towards old school D&D and adventure game players and is a curated collection of a whole lot of long form articles on things that you can add to your games to help with the story and make the whole thing more fun. What attracted me to the Kickstarter is that it is about storytelling and I have always been interested in the process even if I have mostly been writing reviews and reports for the last 20 years.

I had not heard of any of these writers and to find a lot of these articles would take a lot of time and research that you would not be on board for unless you were fully into role playing and making your own scenarios so it is an easy way to get into that world. It does assume you at least know about role playing or are willing to go along with all the terms and phrases used as they get into the terminology straight away.

There are a whole lot of different articles including advice for Dungeon Masters along the lines of general advice, cheap tricks, don’t be a dick and also don’t just be weird for the sake of it. The fantasy setting is a staple for a reason. Surely you can add to it, but don’t try and make everything weird.

I did enjoy the generator articles as in “roll a d20” for a bunch of random things that I never would have expected, which was pretty funny in a lot of the places as I really did not expect what was coming next which would really be great if you were playing the game at the time.

There are bunch of guides to map making and creatures, even the old favourite the gelatinous cube appears at one point.

The artwork and layout is really great and ads to the enjoyment of reading the magazine as it would just be blocks of text otherwise. I have seen some criticism that it was a bit too creative and hard to read at some points but it is easy enough to understand and stands out.

I would recommend this to fans of role playing games but also to people who enjoy telling stories or writing themselves as you can take on board some of the advice for creating your own scenarios and character development as there are things you would not think of in a million years.

From what I see the publisher is looking for permanent contributors going forward so there are going to be future editions of this. Well worth your time and a valuable addition to any adventurer’s library.

With additional Gloomywood scenario for original D&D written by Gabor Lux on the wraparound.