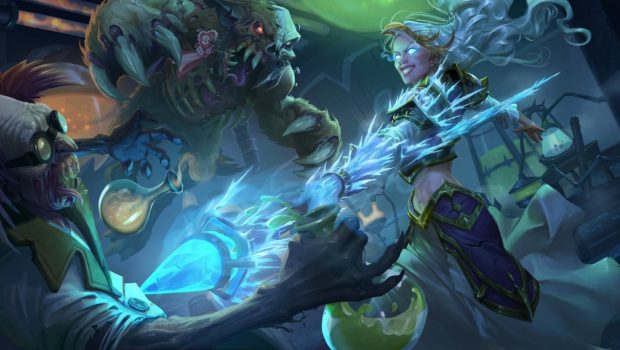 SYDNEY, Australia—August 11, 2017—As the cold shroud of death falls upon the land of the living, Azeroth’s mortal inhabitants shiver with fear—Knights of the Frozen Throne™, the new expansion for Blizzard Entertainment’s smash-hit digital card game Hearthstone®, has arrived. The Lich King—Lord of the Scourge, master of Icecrown Citadel, and wielder of the cursed runeblade Frostmourne—has come to conquer the tavern and those within it, promising power in the form of 135 frosty new cards.

Knights of the Frozen Throne takes players to Northrend, where they’ll meet an untimely demise, only to be raised by the Lich King and granted terrifying new powers from beyond the grave. Adventurers can harness this unholy might by collecting nine new legendary Hero Cards that, when played, transform the heroes of Hearthstone into fearsome Death Knights.

Those with the will to rise against the Lich King can embark on a series of challenging missions that Knights of the Frozen Throne offers to everyone—for free. Players who enter the icy halls of Icecrown Citadel and complete the prologue shall receive a random Legendary Death Knight Hero Card before battling through two wings guarded by iconic bosses like the pestilent Professor Putricide and Blood Queen Lana’thel . . . until only the Lich King stands between them and the Frozen Throne.

“The Lich King is one of our most iconic villains, and we’re excited to finally bring him—and his nine new Death Knights—to Hearthstone,” said Mike Morhaime, CEO and cofounder of Blizzard Entertainment. “Whether they’re ascending the Frozen Throne or duelling with friends at Fireside Gatherings, we can’t wait to see how players wield these deadly new cards.”

* Three (3) free Knights of the Frozen Throne packs are a one-time offer and available only for a limited time. Offer ends 1 November.