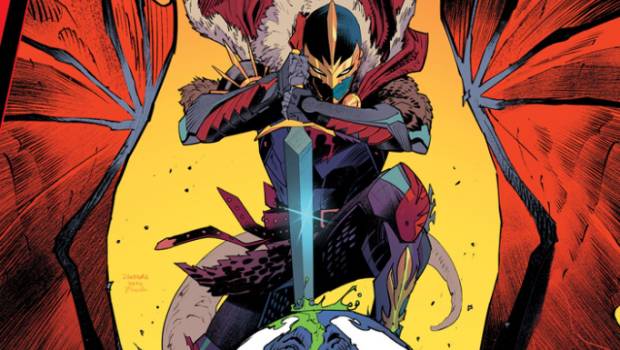 Knull’s ferocious assault upon earth is soon at hand in KING IN BLACK, the monumental event spinning out of Donny Cates and Ryan Stegman’s game-changing run on Venom. Heroes across the Marvel Universe will be called upon to do battle against Knull and his army of symbiote dragons, including the famed wielder of the mighty Ebony Blade, the Black Knight! The Avenger will take up his sword and shield to defend against Knull’s unstoppable onslaught in KING IN BLACK: BLACK KNIGHT #1.

From the superstar creative team of writer Simon Spurrier (X-Men Legacy, X-Force) and artist Jesus Saiz (Star Wars, Captain America: Steve Rogers) comes the latest chapter in the legendary saga of Dane Whitman. As the endless horde of symbiote dragons darken the skies of Shanghai, Black Knight will have to overcome the growing evil within himself while grappling with surprising discoveries about his past. This epic issue will introduce new readers to the fan-favorite hero and reveal the bright future he has in the Marvel Universe, all amidst a vigorous battle that will go down in Marvel history!

Here’s what Spurrier had to say about his venture into the Black Knight mythos:

“I’ve always had a soft spot for the Black Knight. On paper he’s a splendid mashup of renaissance-fair fantasy and blood-drenched horror, somehow managing to hold his own alongside the bright sciencey heroes of the Marvel Universe. It should be an awkward fit — and maybe it is. Maybe that awkwardness is what really sings about this character. A troubled anachronism trying to hide his dysfunction behind swashbuckly snark, whose greatest weapon (the fabled Ebony Blade!) is also the source of all his trouble. See, it’s a bit… well… murdery. In a “Thirsts For The Blood Of The Living” sort of way.

“This is not your average hero. But then, King In Black is not your average event. In this crashing-together of eldritch shadows and global defenders, who better to come charging forth to slay some dragons (technically cosmic superpredators, but let’s not split hairs) than a champion soaked in darkness of his own? And who better to shine the spotlight on some of Earth’s Mightiest Heroes outside the western hemisphere than a guy who feels like a stranger in his own armor?

“King In Black: Black Knight takes the action to the skies above Shanghai and tangles the King in Black event with the fates of two extraordinary Chinese heroes. It glories in the ultra-rich painted art of Jesus Saiz, and verily, ‘pon my troth, thou art mightily compelled to check it out.”

Head over to Marvel.com for an exclusive look at this action-packed issue and don’t miss the return of Black Knight when KING IN BLACK: BLACK KNIGHT hits stands in January!