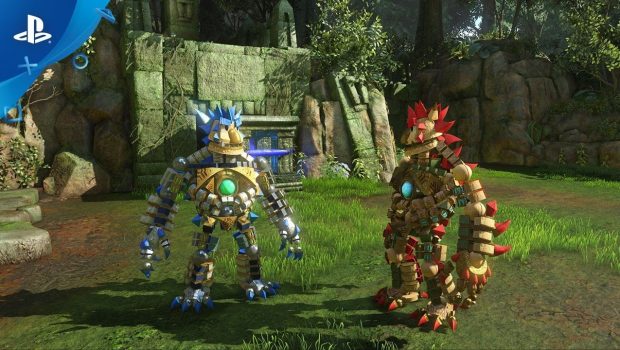 Summary: Knack II is a fun beat 'em up platformer best suited for kids and families and shines best with its seamless co-op and more varied action-combat - the story and hero is still dull as ever, though.

Knack 2 is one of those unexpected video game sequels you can’t help but scratch your head over. As the follow-up to one of the PlayStation 4’s launch titles, the original platforming beat ‘em-up game disappointingly produced tedious combat mechanics, below-average platforming and a strange titular hero who just wasn’t mascot material.

Almost four years later, SIE Japan Studio have evidently taken the lukewarm reception to heart and to my surprise, Knack II is a fun and much tighter experience improving upon its predecessor significantly in the gameplay department – unfortunately, its main character and his allies are still as dull as dishwater compared to the competition releasing this year. 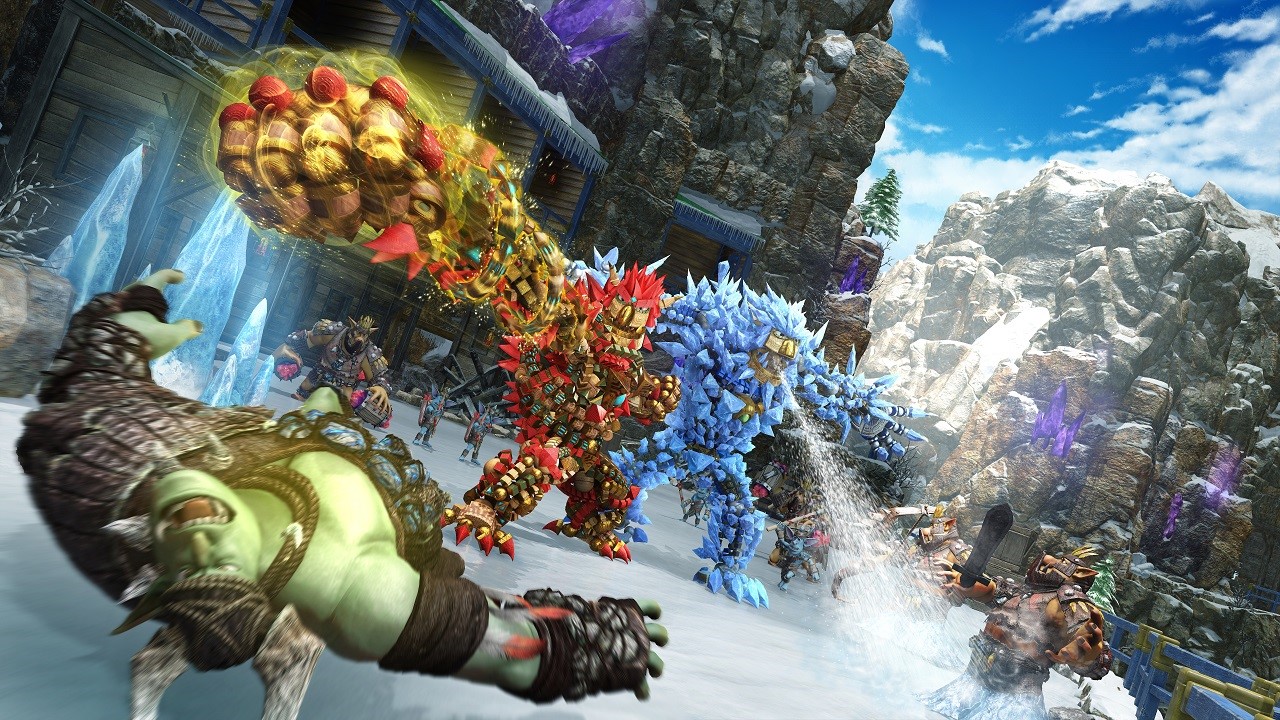 For those unfamiliar with the series, Knack II is an action platformer with a large emphasis on beat ‘em-up gameplay. Progressing through a series of levels represented on a world map, you punch, kick, and jump your way through multiple goblin and robot enemies while solving simple puzzles and discovering hidden collectibles. The third-person view and fixed camera angles of its cartoon-like environments is reminiscent of a simpler time in gaming, but there is a genuine mish-mash feel of Crash Bandicoot and God of War gameplay to be found in the sequel.

Knack II’s main gimmick is the hero’s transformation abilities: As an ancient relic brought to life (yes, really), Knack grows larger whenever he comes into contact with more artefacts while progressing through levels, which allows him to take on more dangerous enemies and use the environment and its objects in new ways. He can reach up to 20-feet tall if enough relics are collected, and can also shrink down into what I affectionately coin ‘Baby Knack’ at will to navigate certain tricky obstacles or fit into small vents and hidden pathways for collectibles. 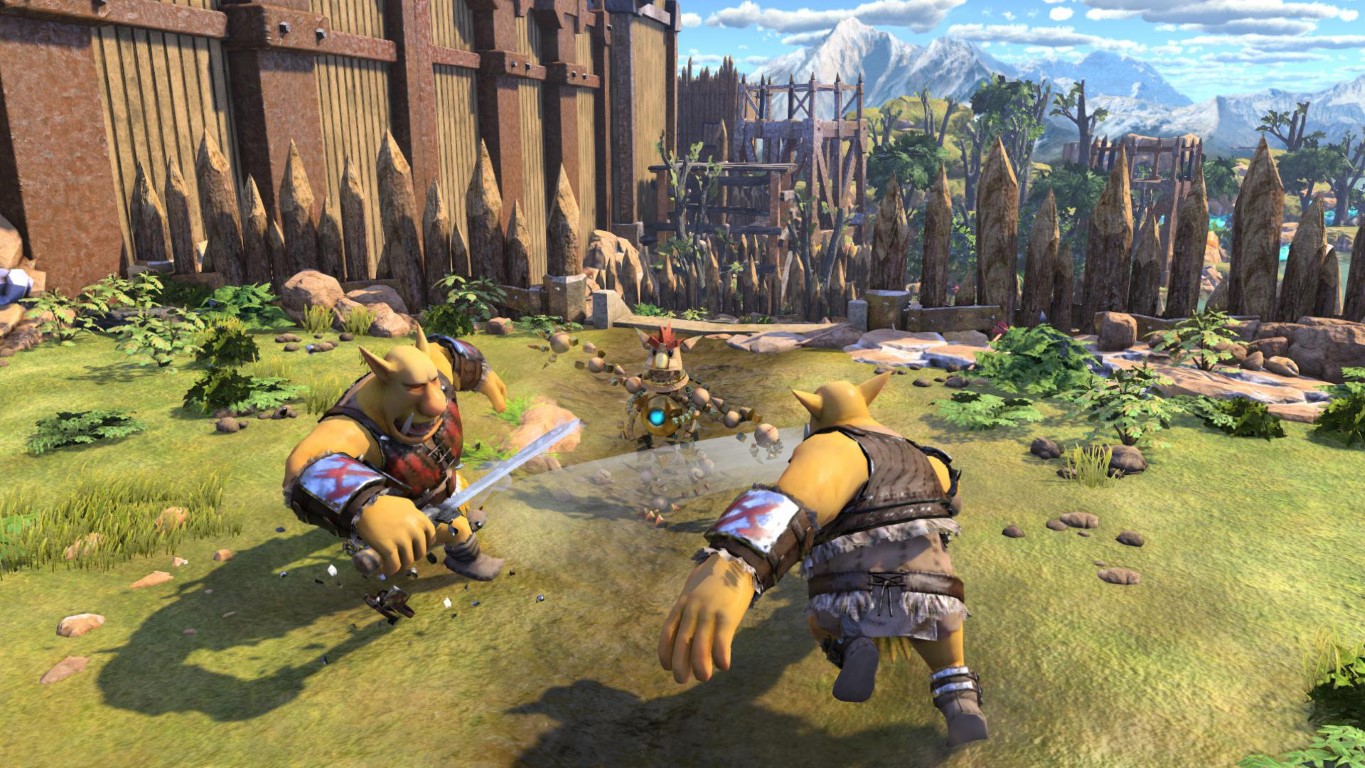 The main improvements between the original and the sequel is the moment-to-moment combat and platforming traversal. The first Knack was essentially brawl after brawl with repetitive attack inputs mixed with disjointed platforming sections (and incredibly perplexing and infrequent checkpoints). Knack II introduces a slew of new moves, including dodge, ground pound, hook-shot, flurry punch, jumping long kick and several unique moves that can be unleashed if you have a co-op partner present (flurry punching second Knack, for example, sends bits of their relics flying in the face of their enemies). From time to time, Knack can utilise several special abilities, including freeze and electricity powers. Add in an ability tree full of unlockable passive speed boosts and new attacks and suddenly every level subsequently gets a lot more interesting – and challenging, especially if you have a second player on-hand. Solo is perfectly fine, but co-operative play really makes the game.

Co-op in Knack II is now fully seamless, with drop-in, drop-out functionality so there’s no pressure to play through the whole way together, perfect for short bursts. The added competition fostered with a second player makes the clockwork platforming sections great fun when you’re trying to beat the other person to the finish while avoiding traps and smashing enemies aside. The harder difficulty settings, too, where enemies have health buffs and require more combos and smartly-timed dodges to successfully defeat them, are generally way more engaging with a friend and more entertaining than the brain-dead A.I of the easier settings – I daresay even younger players will probably gravitate towards that extra challenge. 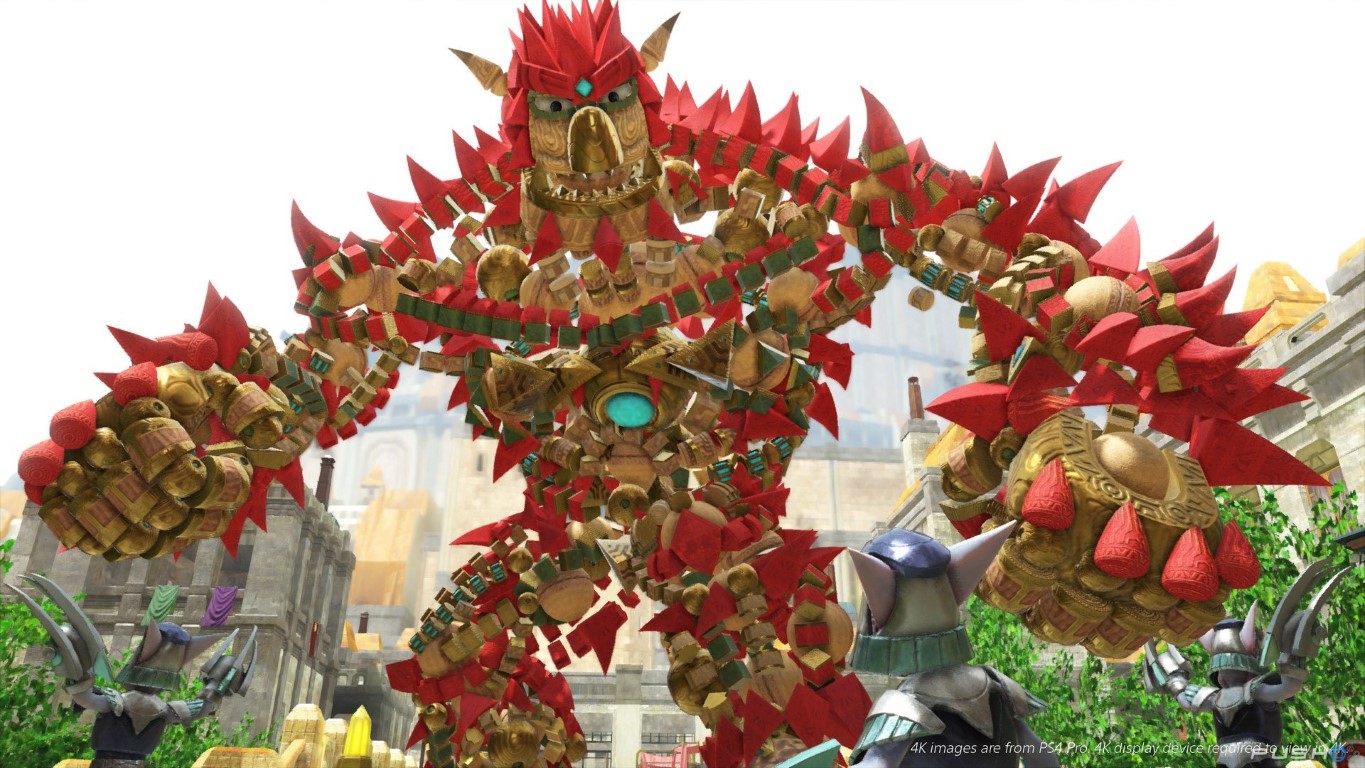 The smarter enemies in hard mode also cleverly encourage the use of Knack’s gradually increasing moveset and the larger groups of enemies demand proper crowd control tactics – jump-in, dodge, jump-in, jump-out, regenerate health, gear for the final blow. The game nails the general combo-heavy rhythm well, and is all the more engaging for it. Combined with the chaos on-screen with Knack’s multiple relics going everywhere each time he gets hit or dishes out the pain (which is genuinely impressive from a visual standpoint due to the particle effects) and tons more frequent platforming sections interspersed between combat heavy spaces, and it was like a night and day difference compared to my experience with the first game.

Not all elements were nailed, though. More than a few boring QTE sections bolted onto main story cutscenes disrupted the general flow of level progression. At least the level design being a lot more interesting makes up for these instances; you’ll be smashing, jumping, and exploring your way through medieval castles, giant forests, ancient ruins, and metropolitan cities which provide some genuinely pretty to look at scenery. The whole game is quite a treat in terms of eye-popping visuals, running at a solid 1080/30fps on the standard PlayStation 4 and enhanced significantly on PlayStation 4 Pro with the options of either checkerboard 4K/30fps or 1080p/60fps (and High Dynamic Range on top of all options). Seeing as Knack II is directed by Mark Cerny, the architect behind the design of the PlayStation 4, it’s no surprise the team went the extra mile, but it is great to see even a so called ‘kids game’ still gets the full high graphics treatment. 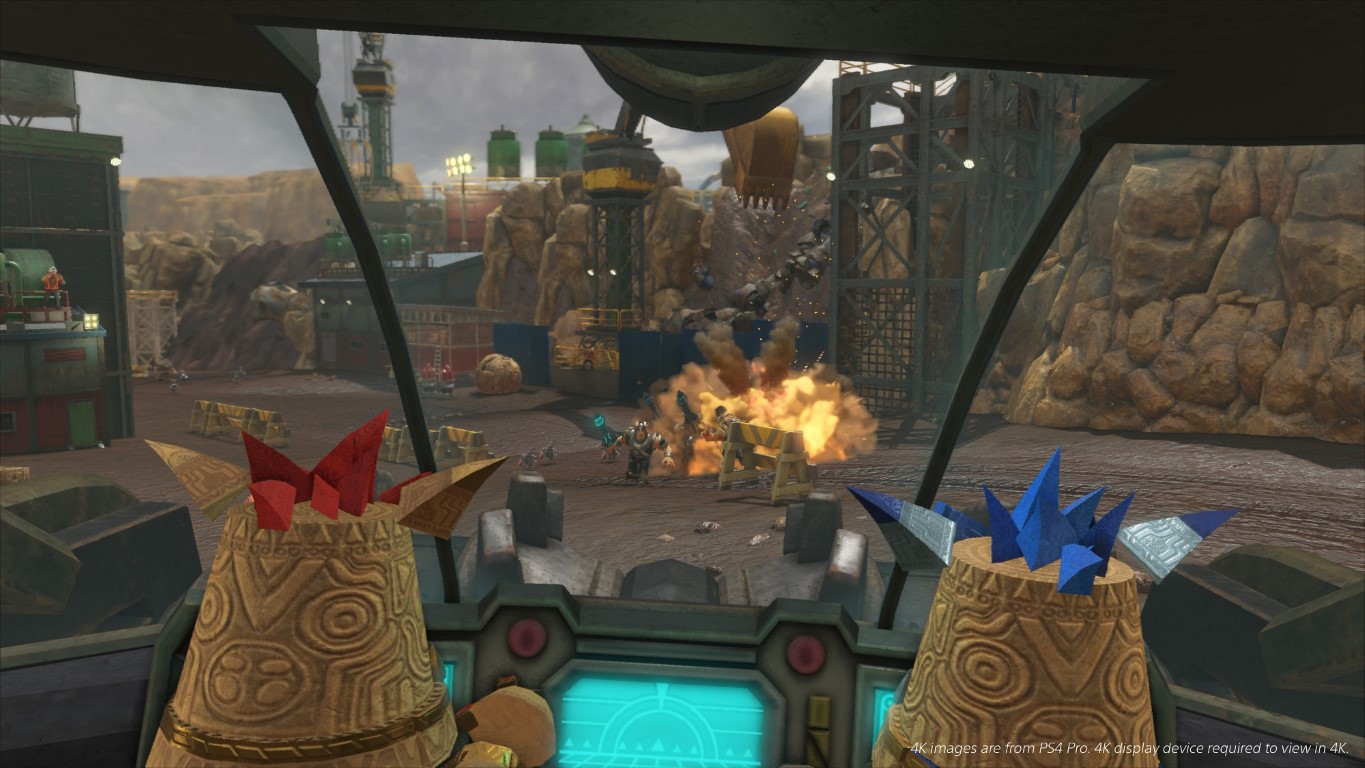 Knack 2 features a care-free storyline best suited for younger children and older players who like to switch their brain off while casually gaming. After our hero saved the world from the goblins in the first game, those nasty green devils have returned to wreak havoc against the humans, sending out technologically-advanced robots to do their dirty work. An ongoing mystery surrounding an ancient city lost to history serves as the convenient plot device for introducing new interesting enemies with overhauled appearances, abilities and weapons that are actually fun to fight against compared to those knuckle-headed goblins from the first game.

But that’s where my praise ends regarding the narrative, because the character design, voice-acting and overall story is mostly unappealing. The main problem is Knack himself; everything else about him lacks personality compared to other famed PlayStation mascot characters. He spouts cringe-inducing one-liners (“Ice is nice”) in a comically mismatched voice, never shows any real interest in his journey to save the world, and just seems… bored. His human companions, such as Lucas and his uncle Ryder, have equally irritating dialogue and personalities; they seem content in letting Knack do virtually everything to advance the plot. They also have what can only be described as Pixar-reject faces. Seriously, stare into those freakishly weird eyes of their and tell me if there’s any soul to be found in them. 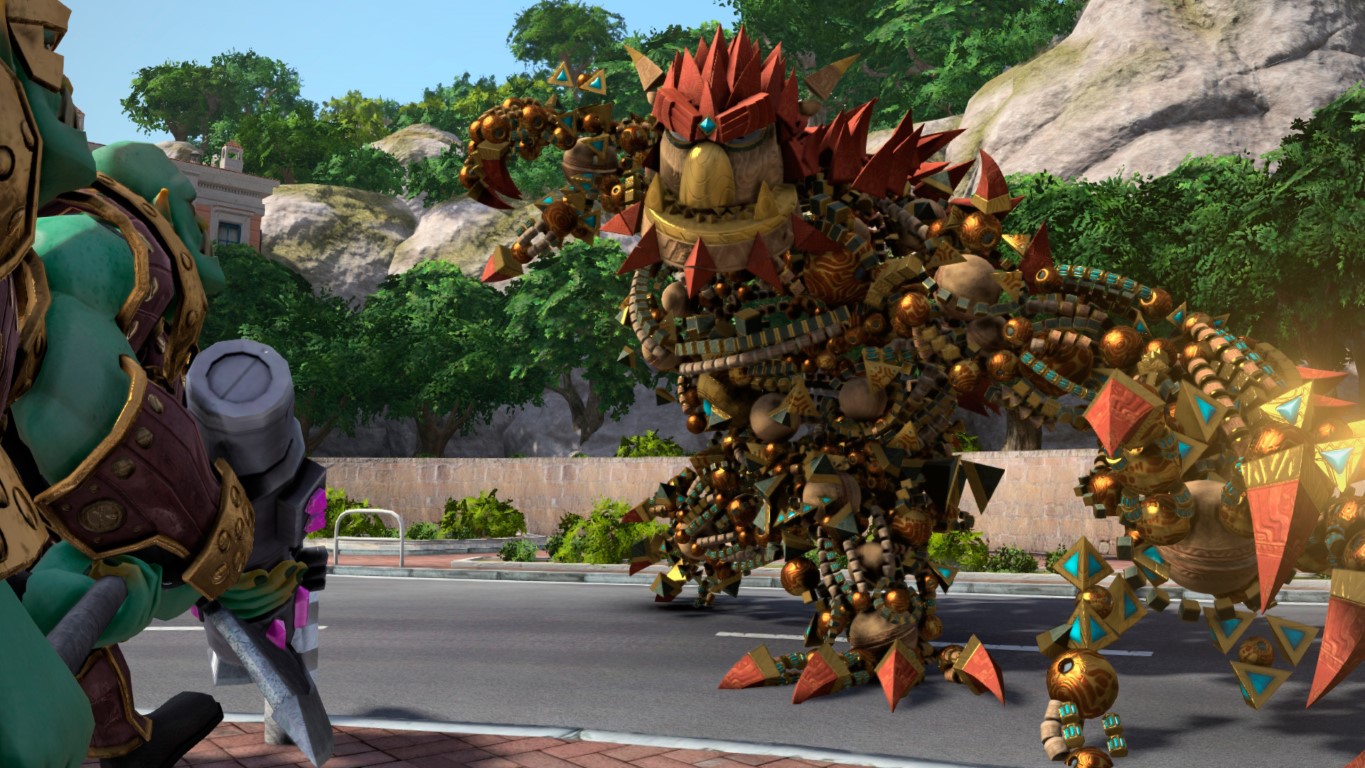 Anyway, Knack is kind of cute while he is in mini-form and his transformation abilities are neat, but there’s just something about him that lacks the necessary connection that can keep players genuinely invested in him beyond being a cool shape-shifting thing that can beat up goblins and robots in a number of ways. Even those many goblins and robots he pummels into the earth – while fun and engaging to fight – are as generic fantasy/sci-fi tropes as they come. It’s kind of a downer, as I really found myself having fun with just about everything else, but whenever a cutscene or dialogue exchange occurred, I more often than not found myself switching off.

Knack II is a fun platforming beat ’em up best suited for younger players, families or anyone who loves co-operative action-based gameplay. It may not set the charts or world on fire, but it improves upon its predecessor in several significant ways – with more varied and engaging combat, a larger emphasis on clever platforming and extremely impressive graphical options. It’s just a shame the titular hero lacks that necessary personality to properly shine and that the story is less interesting than ever.