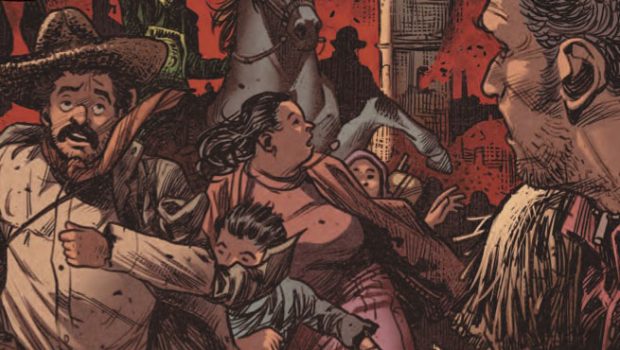 Summary: The story is immersive, the characters are dark and complex and the world is vast and dangerous.

Kingsway West #2 delves deeper in to the story of Kingsway Law, a Chinese gunslinger who fought during the Red War and now desperately wants to live a quiet life with his wife, Sonia. With the disappearance of his wife and the arrival of trouble, the dream of a peaceful life quickly fades, as Kingsway is thrown into a journey filled with wings, guns and magic! This is an epic Wild West fantasy and what’s not to love about that? 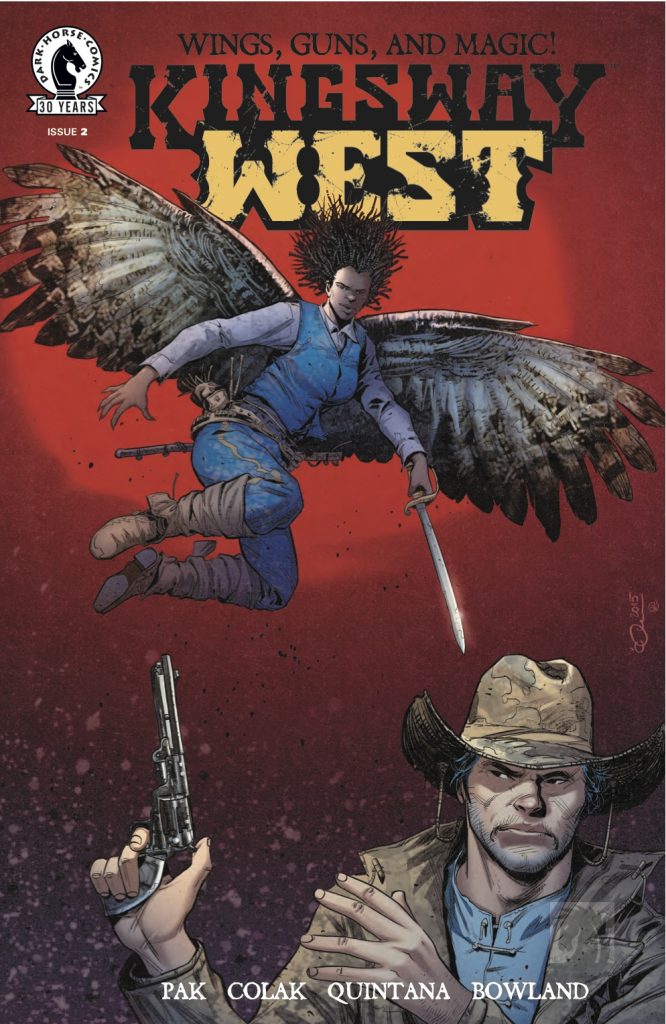 This issue begins with a retrospective flashback to sweeter times, when Kingsway Law and Sonia were at home together. They are both in love and happy, yet one cannot fight off the scars of war for long. Both Kingsway and Sonia are veterans of the Red War and this war-weary couple struggle with memories that still haunt them to this day. They both trade traumatic stories about the war, stories that they are not proud about but this acts as a kind of healing and cathartic process for them. A tender moment of reliving with the past that is shared between trusted lovers. We are then quickly jolted back to the present and the reality of Kingsway’s dilemma from the previous issue: the whereabouts of his wife. This is where the previous issue finished for us and we are back seeing Kingsway Law and the mysterious Ah Toy facing off with a group of Golden City Soldiers who are demanding information about Ah Toy’s Red Gold. This Red Gold seems to be causing a lot of problems for Kingsway, as it is highly sought after, not only by the Queen of Golden City but also the Engineer of the United States of New York. All of which all Kingsway Law cares little about, as his sole objective is to find Sonia. I rather like this unwilling partnership of Kingsway and Ah Toy, which filled with awkward and venom-like banter. Kingsway is forced into this partnership, as he needs Ah Toy and her dragon to help find his wife, but of course this comes at a cost. A favour for a favour, so to speak. 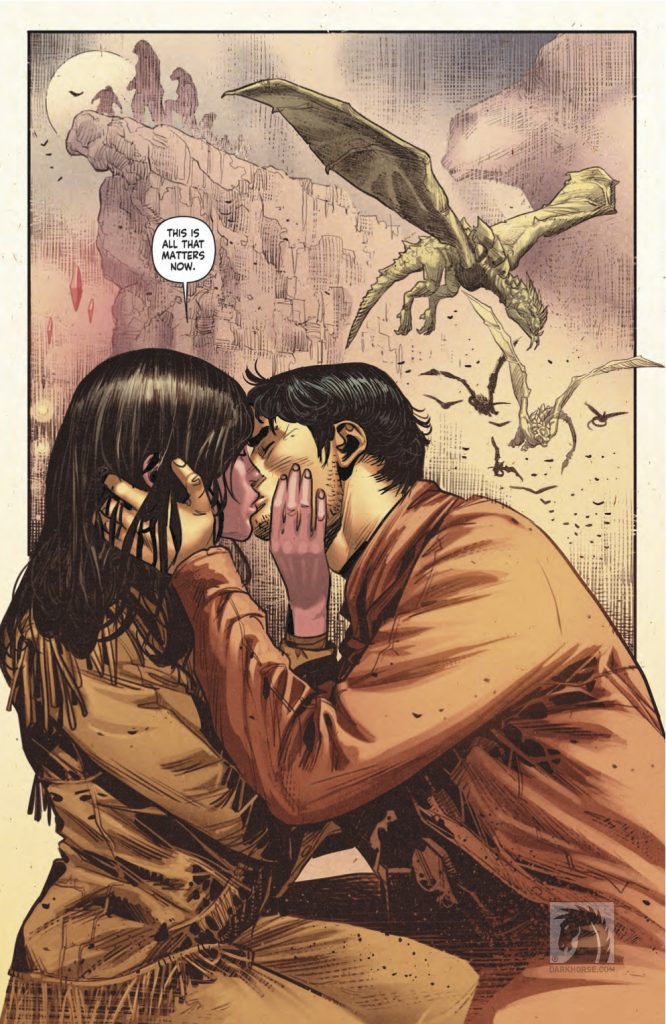 Greg Pak has really amped up the emotional tone of this series with some clever storytelling and characterisation. Kingsway Law is a war veteran who suffers from some pretty traumatic PTSD. His life is filled with guilt and regret, with tormenting flashbacks to the war and the atrocities that he witnessed and partook in. This is a man who has lived his life keeping all of this internalised, until he met Sonia. She has been his one outlet, whilst at the same time he has been for her. You really get the sense when they talk about their past that it’s very cathartic for them both and it comes very naturally for them, even though they have been guarded about these events for years. I enjoyed seeing Kingsway’s inner dialogue to Sonia throughout the present scenes. He made a promise to her and is naturally conflicted in the actions he must take to find her, as they directly break this promise. This reflective voice really gives us an insight and understanding into what makes him tick and this is important, as it lays the foundations of a solid and relatable character. 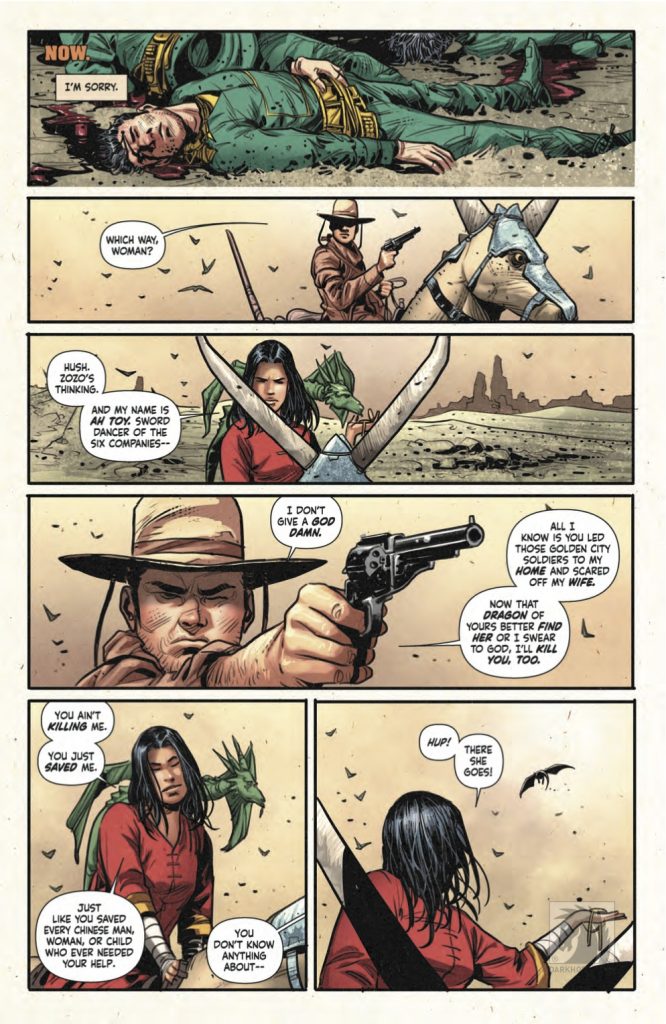 Artist, Mirko Colak, has really flexed his artistic muscle when designing this alternate Earth. The designs are unique and eclectic and there is something really enjoyable about being immersed in this magic filled Old West. I thoroughly enjoyed the realistic quality of the human faces, juxtaposed alongside winged warriors, dragons and armoured bunnies. Also, what’s not to love about an armoured battle bunny? Visually, the mishmashing of fantasy and the Old West messes with my mind in a good way, so it’s excellent to see a talented artist, like Colak, bring this world to life. Like I mentioned earlier, this is a story filled with heavy themes, centering around Kingsway’s emotional triggers, which are lined with guilt, regret and remorse and Colak reinforces this through his beautifully drawn faces. You really get a sense that Kingsway is a tormented man, as his inner pain is visible through the deep lines in his face, that reflect a life of stress and hardships. Colourist, Wil Quintana, has really emphasised the fact that we are in a Western. The colours are gritty and almost dirty and the world looks like it’s bathed in dust and sand. The almost sepia-like tones also create the sense that we are watching an old movie from the past. I rather like that effect and believe that it works really well with immersing us in the story even more. 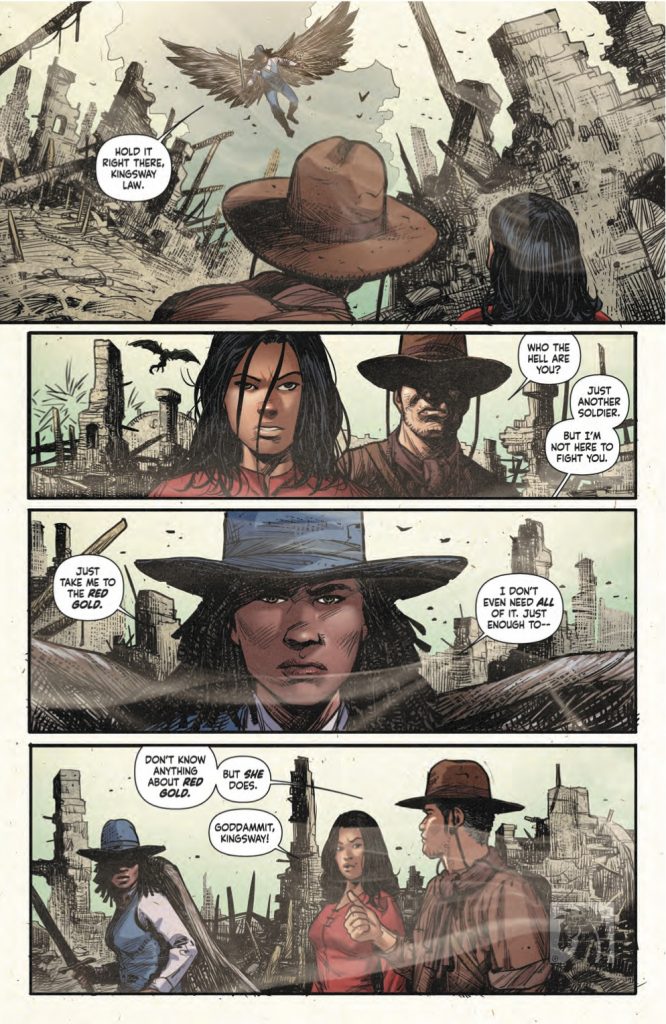 Overall I’m really loving this Old West fantasy. The story has me intrigued, the characters are dark and mysterious and the world is epic. Seriously, give me a well-written gunslinging tale filled with magic and dragons and I’ll be lining up for the next issue. Do yourself a favour and grab a copy today!