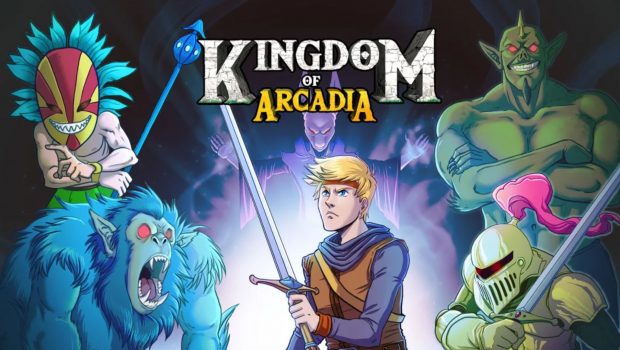 Summary: When it comes down to it, this game is suppose to be retro. Just a little too retro.

The Kingdom of Narcolepsy

Will this game be worth playing or should you skip it?

Kingdom of Arcadia follows Sam a kid who is avid videogame fan (relatable) whose father is a fan of old school video games (also relatable). Sam’s father keeps an arcade system in the basement and tells Sam he can play it whenever he is ready. Sam takes the plunge and goes to play his father’s old cabinet arcade system to be pulled in, pixelated and placed as the main protagonist of this new worlds adventure. I will not spoil the story but to get back to reality he must complete his adventure. Aided by a wizard you start off with a shield and armor and the ability to travel to the different kingdoms.

We will start off with the graphics. 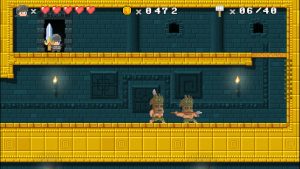 Firstly, the game looks generic. The graphics are not terrible everything is crisp. It’s just that the pixel look has been done a lot recently and done much better in other games. The colors look good, but the animations are basic. Almost like frames are missing. The enemies are the same just re-skinned to look a bit different in every Kingdom. The kingdoms themselves are also just reskinned stages with a few varying paths to encourage light exploration. The bosses are bigger but suffer from the same lack of imagination. That is what the graphics are. Just uninspired, unimaginative, and boring.

Let us talk about the audio. 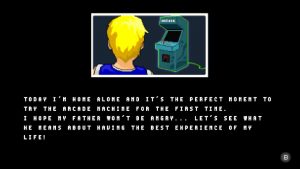 The audio will not do anything special for you. The music is lacking. It is redundant and does not add anything to the feel or gameplay. Just your usual action-adventure strings. Enemies have audio cues the telegraph attacks. Enemies also respond to being attacked with audible sounds. The sword swishes while being swung around. Audio when clashing with an enemy makes a bumping sound and so does throwing an axe at them. Coins do have a satisfying clink and clatter when dropping from defeated enemies. Overall, the audio is not terrible it is just average.

That will bring us to gameplay.

You control Sam with the left thumb stick or d-pad. You jump with B and you are also able to double jump by tapping B again when midair. You swing your sword with Y. Throw projectiles with X. With this move set you fight your way through the Kingdoms. 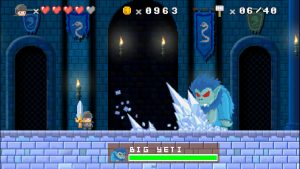 You do this by completing stages and defeating Boss battles. The game controls well and that is needed because this game offers a mid-level of difficulty that also ramps up quite a bit in the later stages. So no delay or input lag from what I can tell. Everything is responsive with no frame drops or crashes. The stages are structured to offer some platforming and challenge to your reflexes. It just is not enough to keep the game engaging. You fight using the same attacks you are attacked by the same type of enemies and the stages are basically the same just reskinned. It becomes a chore after a few stages. The equipment upgrades offer buffs to attack strength, health and projectiles but does not change the game play much. 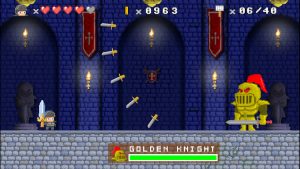 Hidden items and passages encourage you to explore every corner. But what you find is never worth the effort. Often, I found myself just wanting to be done with the game and not because it is a poorly made game or even a long game. It is just boring. The stages, the movement, the music just does not make for an enjoyable experience. I would give this try only if you are a super fan of basic, retro, action-adventure platformers. Even then I would try something else out first.