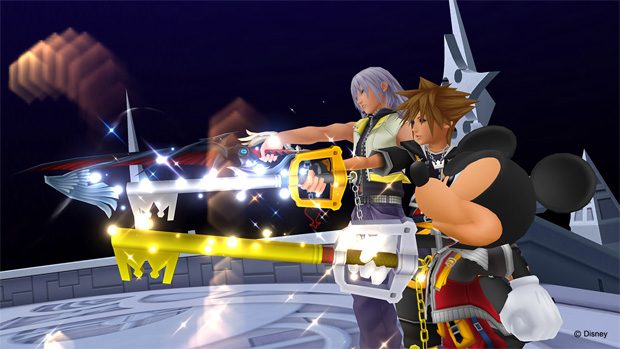 Summary: As a whole, Kingdom Hearts HD 1.5 + 2.5 ReMIX is an essential purchase for series fans and newcomers, and represents great value!

“When is Kingdom Hearts 3 coming out?” must be a refrain that its creator and belt and zipper enthusiast Testuya Nomura is extremely tired of hearing. It has been 12 years and 2 console generations since the last mainline Kingdom Hearts title, and the anticipation grows every year. Now that it finally seems like a release date may be on the horizon, what better time than to dive back into the original games with fancy new graphical upgrades? Kingdom Hearts HD 1.5 + 2.5 ReMIX brings almost all the series titles to one platform for the first time in series history, and it is a joyful experience. 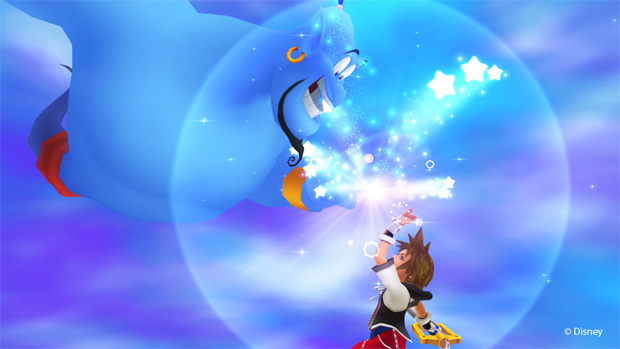 For those who aren’t aware of Kingdom Hearts it began its long journey as a literal elevator pitch, when a Square Enix producer bumped into a Disney producer in an elevator. The idea was simple, combining Disney and Final Fantasy into a smooth action RPG experience. The first game was a fantastic effort right out of the gate.

It tells the story of Sora, a young boy living an idyllic yet quiet life on a tiny islands with his two best friends Riku and Kairi. Sora yearns to leave the island and find worlds beyond. He eventually finds there are multiple worlds, but all are in danger of being consumed by creatures called “The Heartless”.  Sora is eventually joined by Donald Duck and Goofy, as they travel to various Disney Worlds in order to stop the Heartless and find the King, Mickey Mouse. 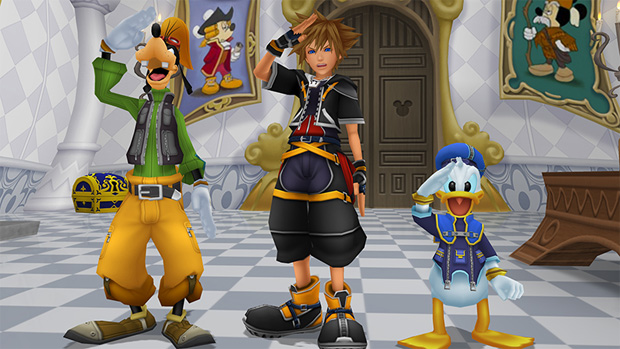 There is a large level of gleeful fan-service, as each Disney World features most of the original voice talent and it certainly evokes warm feelings of nostalgia to run around the streets of Agrabah, or pal around with Pooh and friends in the Hundred Acre Wood. Each world is a loving tribute, and they still look great all these years later. The HD facelift suits these games well, as the environments and textures look sharp, and the character models remain as expressive as ever.

It really does feel like your favourite childhood movies coming to life. Final Fantasy fans also get their share of nostalgia too, as Yuffie, Tidus, Wakka, Aerith, Squall, Cloud and Sephiroth (voiced by Lance Bass in the first game, seriously) among many others make appearances. Most of these characters have tangential links to the main plot but all have their part to play, and Cloud and Sephiroth take centre stage in one of the first games best sidequests. 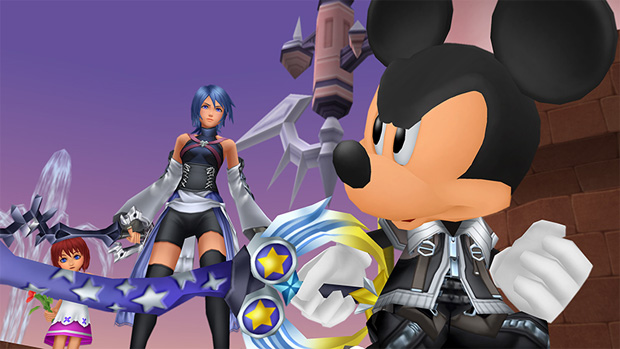 Thankfully, the update to Kingdom Hearts doesn’t stop at the graphics, they’ve finally moved the camera controls to the right analogue stick, instead of its god-awful placement on the shoulder buttons in its original iteration. This is helpful for most of the game, although for this reviewer the playthrough of the Little Mermaids world was still infuriating.

Kingdom Hearts 2 is just as beautiful as the first game, with many added gameplay tweaks to make the battle system more interesting. The game looks great again, and although many people dislike the slow start, it does end up tying in to the main story rather beautifully. 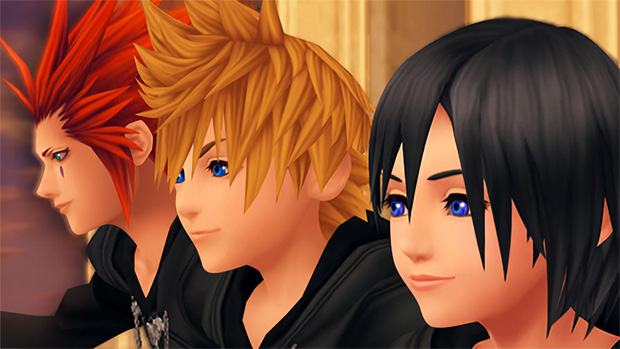 In addition, this package also includes two very worthwhile side entries to the franchise. Re:Chains of Memories is a fun card battle based RPG, and Birth by Sleep is a prequel that fills in many extra shades to the story. Birth by Sleep doesn’t receive as lush a visual upgrade as KH1 and KH2, mainly due to its PSP roots, but it is still worth playing through.

Also included are 358/2 Days and Re:Coded and it is harder to recommend these. Both were Nintendo DS games originally, and for the PS4 versions Square Enix has gutted out all the gameplay and assembled them as cutscene movies. They don’t add much to the franchise as a whole, and sometimes serve to muddy up the waters on what is already a very convoluted world and plot. 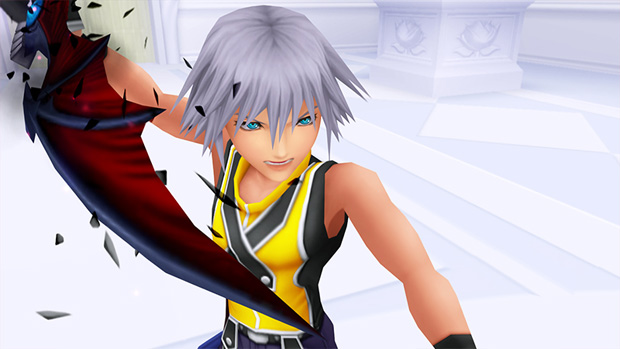 As a whole, Kingdom Hearts HD 1.5 + 2.5 ReMIX is an essential purchase for series fans and newcomers, and represents great value. There may be odd technical issues here and there, and in some parts the gameplay may feel a little dated, but the overall package is as compelling as its first release all those years ago. 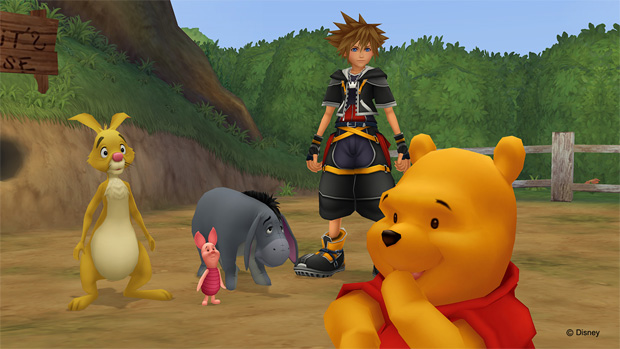 KINGDOM HEARTS HD 1.5 + 2.5 ReMIX is an HD remastered collection of 6 unforgettable KINGDOM HEARTS experiences available for the first time on the PlayStation® 4. The HD collection features: 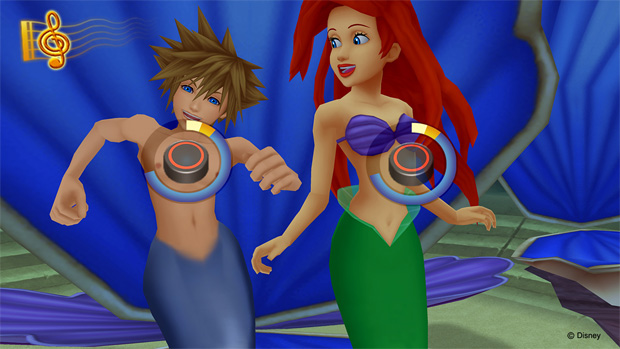 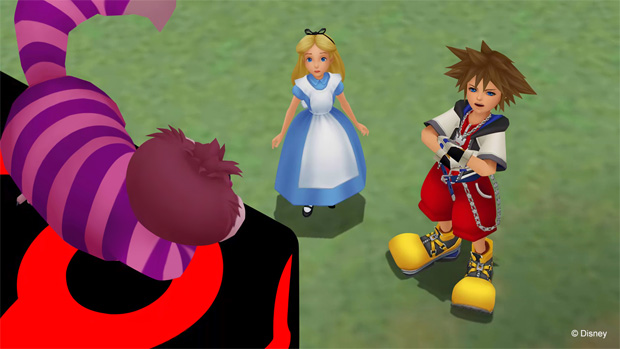