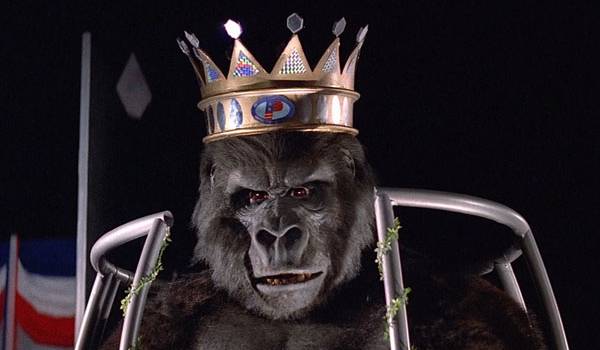 Summary: Derided on release but not boring like the Peter Jackson version and well worth a look if you like ape suit cinema.

Based on the original 1933 film but with a more modern spin this film sees King Kong being discovered by oil company Petrox and used as a promotional stunt, with predictable results.

Scruffy looking nerf herder Jeff Bridges stars as Jack, a palaeontologist who stows away on the expedition upon hearing where it is headed. Charles Grodin is company man Walter and Jessica Lang does such a good job as the thankless bimbo role of Dwan that she had trouble getting work afterwards.

In the suit as King Kong is Rick Baker who was uncredited for his work but was thanked for his contribution at the end of the movie. He had four different ape suits with different faces with the animatronics operated off screen. There was a funny story about the giant arms flipping off Dino de Larentis and then getting stuck. They really did lift Jessica Lang 40ft into the air with the giant arms and she got a pinched nerve in her neck from being squished. According to the Ape Suit Cinema group Will Shephard was Rick Baker’s alternate and shot the wrestling the snake, breaking through the gate and some other scenes. Rick Baker thought he caught on fire during one scene due to the explosions, it was intense to film.

There was a 40ft high King Kong built by Carlo Rambaldi (Alien, Close Encounters of the Third Kind, ET) for the equivalent of $2.32Million but it was hardly used and you can tell how janky it looks on screen. Dino de Laurentis was deliberately unclear during promotion as to whether they were going with the giant robot or the suit.

While this movie does not really have that good a reputation, you can’t say that is boring and it was the equivalent of a $100million blockbuster today. There was a trend of environmentalism in movies from the 1970s including man vs. nature in the form of feral animals (Dino de Laurentis also made the JAWS rip off ORCA). Dino famously had the line “when the monkey dies everybody cries”.

The movie Skull Island also sets their story in the 1970s and seems to borrow some aspects of this film such as the fight with the helicopters. Having helicopter gunships in the movie would have been a lot bigger thing as the Vietnam War had just finished and people would not want to be reminded of it.

The giant ape in the room is of course the World Trade Centre which had just opened when this movie was filmed. They asked for 5000 extras in one scene in the plaza and 30,000 turned up. They were glad for it.

Some of the things in this movie are very 1970s such as name-checking the movie Deep Throat several times and Kong generally acting like a sex pest.

I would recommend watching this movie alongside Skull Island and skip Peter Jackson’s version as it is boring and arse. This is the 134 minute version of the movie, the deleted scenes are on the disc but from what I hear they do not really add much to it. Some of the blue screen effects come off second best in 1080p, the suit effects still look great though. There is a making-of on the disc also but you can look up plenty about this film online, kind of pointless. 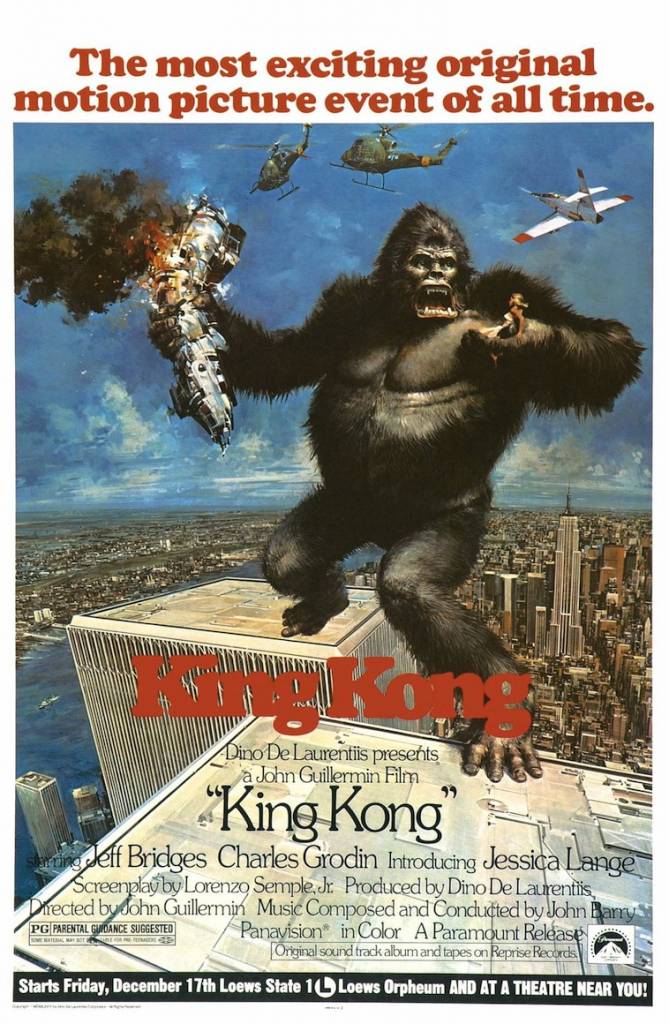