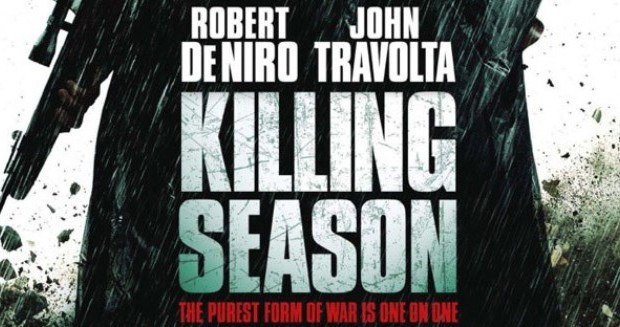 Summary: Killing Season is an interesting film that is also the first time that these two actors have worked together and the chemistry is brilliant.

The Killing Season is an action thriller starring Academy Award winner Robert De Niro and John Travolta that is directed by Mark Steven. It focuses on retired soldier Benjamin Ford (De Niro) who now spends his time in the Appalachian mountains as he attempts to remove himself from the violent life that he once led in his isolated cabin. Unfortuantely his relatively peaceful yet scarred life changes when he is approached by Emil Kovac (Travolta), a European tourist who has car troubles and is offered a place to stay for the night.

While the two talk, Ford realises that this man is not what he seems and is actually a Serbian war criminal hell bent on revenge against him. It is here we learn that during Ford’s enlisted time in the military he had crossed paths against Kovac that sparks this deadly game of cat and mouse. With that said, the Killing Season is quite a violent film that does highlight the evils of tortue so this story is definitely not for the light hearted but will keep you on the edge of your seat. It successfully ticks all the right boxes of drama, intensity and action.

On Blu-ray, the transfer is decent with some sharp images, deep blacks with a touch of muted colours given the weather. All in all, it works well with the Dolby Digbital 5.1 soundtrack and portrays this almost movie-like atmosphere. The 5.1 track really makes use of the surround sound, especially when you hear the elements of the weather such as the rain and the thunder which literally booms through your speakers.

Killing Season is an interesting film that is also the first time that these two actors have worked together and the chemistry is brilliant. The plot is a little predictable at times but for a movie on a Saturday night, The Killing Season may be the perfect solution! 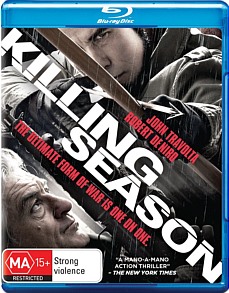