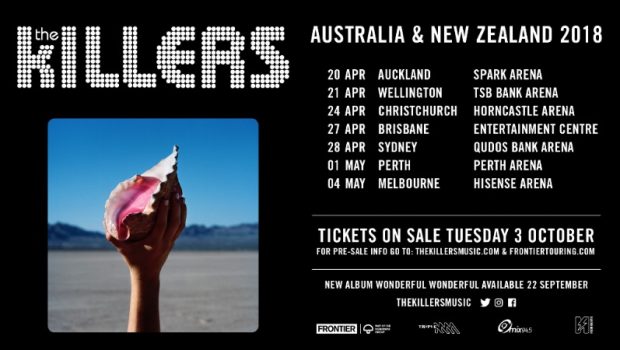 The Killers Announce Their Biggest Tour of Australia & New Zealand!

Frontier Touring, Triple M and Radio Hauraki are thrilled to announce the return of The Killers to Australia and New Zealand in April and May 2018. The widely-acclaimed rock band will play seven arena shows on their biggest Australasian tour to date, touring in celebration of their fifth studio album Wonderful Wonderful (out 22 September through Island Records/Universal Music Australia).

Kicking off in New Zealand at Auckland’s Spark Arena on Friday 20 April, the band will visit Wellington and Christchurch before heading to Australia to perform in Brisbane, Sydney and Perth, before wrapping up the tour at Melbourne’s Hisense Arena on Friday 4 May.

‘They write razor-sharp irresistible synth-rock anthems, with colossal choruses that sting and gleam and they perform them with a slickness and proficiency that may just be in their Las Vegas blood.’ – The Guardian

‘They have a good time on stage – and it’s infectious.’ – Independent

‘Flowers sounds great, the band is on point, and the songs—even the ones the audience doesn’t know—are instantly familiar.’ – Consequence of Sound

The Killers burst onto the scene in 2004, topping Australian charts and going Double Platinum with their debut album Hot Fuss. Featuring hit singles ‘Mr. Brightside’ and ‘Somebody Told Me’, the album received instant popularity and widespread international success.

Their early success continued with two further platinum albums Sam’s Town (2006) and Day & Age (2008), smash singles like ‘When You Were Young’, ‘Human’ and ‘Read My Mind’, and a touring schedule featuring headline arena shows and festival slots around the world including Glastonbury, Coachella and Lollapalooza.

The band’s forthcoming new album Wonderful Wonderful is the band’s first new material since Battle Born (2012). Produced by Jacknife Lee, the album was recorded between Jacknife’s Los Angeles studio and the band’s own Battle Born recording studio in Vegas.

Teased by a series of incredible new songs – ‘The Man’, ‘Run For Cover’, ‘Some Kind Of Love’ and title track ‘Wonderful Wonderful’ – the album is the band’s most sonically forward-thinking record yet, bursting with all of the blazing choruses and arena-pleasing anthems that make them one of the world’s biggest and beloved rock bands.

Back in Australia towards the end of the month, The Killers will be performing in the Virgin Australia Pre-Game Show and Virgin Australia Premiership Party on the 2017 Toyota AFL Grand Final Day (Saturday 30 September). Guaranteed to provide audiences with an outstanding live show, the performance will be a precursor to the incredible tour set to hit our shores next year.

The Killers are finally returning to New Zealand and Australia! As one of the world’s most popular rock bands, these shows are not to be missed. Fans are encouraged to act now to avoid missing out!