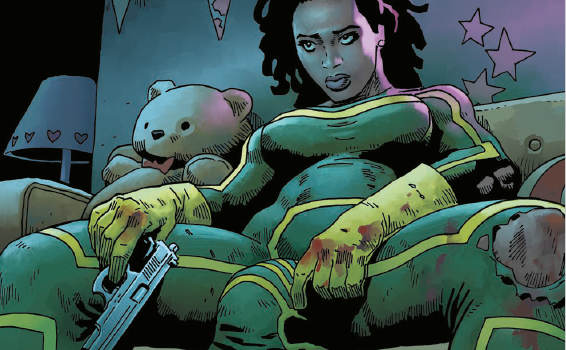 They say that absolute power corrupts absolutely. Bills are piling up around her and Patience could easily solve her financial problems now that she’s basically a crime lord. She swore she’d only take home a soldier’s salary, but how long can she resist the temptation to take more? How long before she takes a tumble down that slippery slope and winds up just as bad as the people whose asses she’s been kicking? In this arc penned by Steve Niles and illustrated by Marcelo Frusin, I feel like it’s only a matter of time before we find out just how committed Patience is to her ideals.

This issue starts out in the middle of an ambush. Santos wants Patience out of the picture, and his men have her trapped dead to rights. But she’s not about to roll over and die. Her training kicks in, and she turns the tables on her would-be killers. The action is furious and intense, with visceral gunfire and one particularly breathtaking panel of Patience bursting out of the shadows like a pistol packing ninja. When it’s all over, she finds out they took one of her men, which leaves her with the burning question—did they actually take him, or was she set up?

It feels like Patience is starting to question the loyalty of the people around her. At the same time, bills keep accumulating and you can tell that it’s a struggle for her to stick with her resolution to survive on a soldier’s salary. Her character is nuanced, and interesting, and most importantly human. Even though she’s a badass in a costume, her struggles are relatable and feel very real. Who wouldn’t be tempted to stick their hand in the cookie jar if they had all that money rolling in?

She’s also still dealing with conflicting feelings over Maurice. When her sister calls to tell her that she’s taking him off life support and wants her to be there, Patience doesn’t know how to feel. He knows she’s Kick-Ass, and he could destroy her life. But if he dies, it’s her sister’s world that’s shattered instead.

Like always, the art in this series is amazing and graphic. I love how seamlessly a panel in the present blends into a flashback, keeping Patience in the same pose through the transition. Everything feels so real and gritty. I’m not ashamed to admit that I cringed during certain panels depicting torture. My jaw ached in sympathy when I saw a tooth yanked free, its roots still dripping with blood. Also, Violencia looks suitably grotesque after his incendiary make-over by Patience during the last arc.

The issue’s cover deserves attention as well. Patience is slumped down on the couch. Her costume is torn and bloodied. A gun hangs loosely from one hand, and she’s barely holding onto her mask with the other. The glow on her face suggests she’s watching TV—taking some much needed time to unwind. Stars and hearts decorate the wall and lamp, and a teddy bear perches on the couch by her shoulder. This is a battle weary soldier, superhero and mother, all rolled into one. It’s the perfect representation of Patience and her struggles.

This is another excellent addition to the Kick-Ass series. My only criticism is that the issue ended. I want more! I’m eagerly awaiting the next issue in this series! I guess you could say that I’m lacking Patience. …I’ll show myself out. 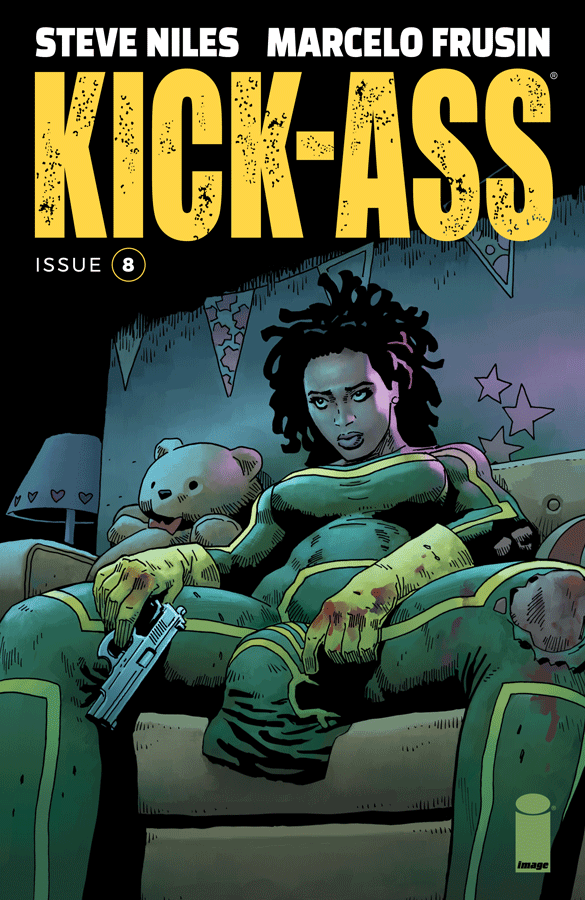 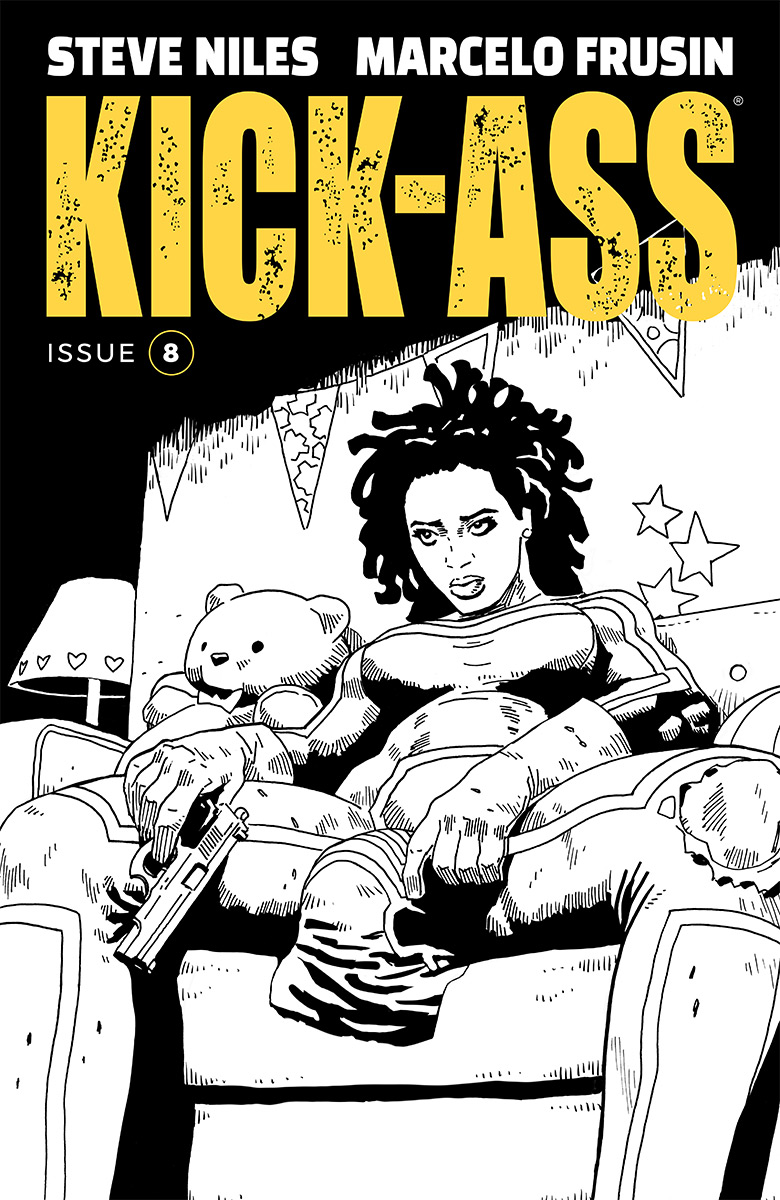 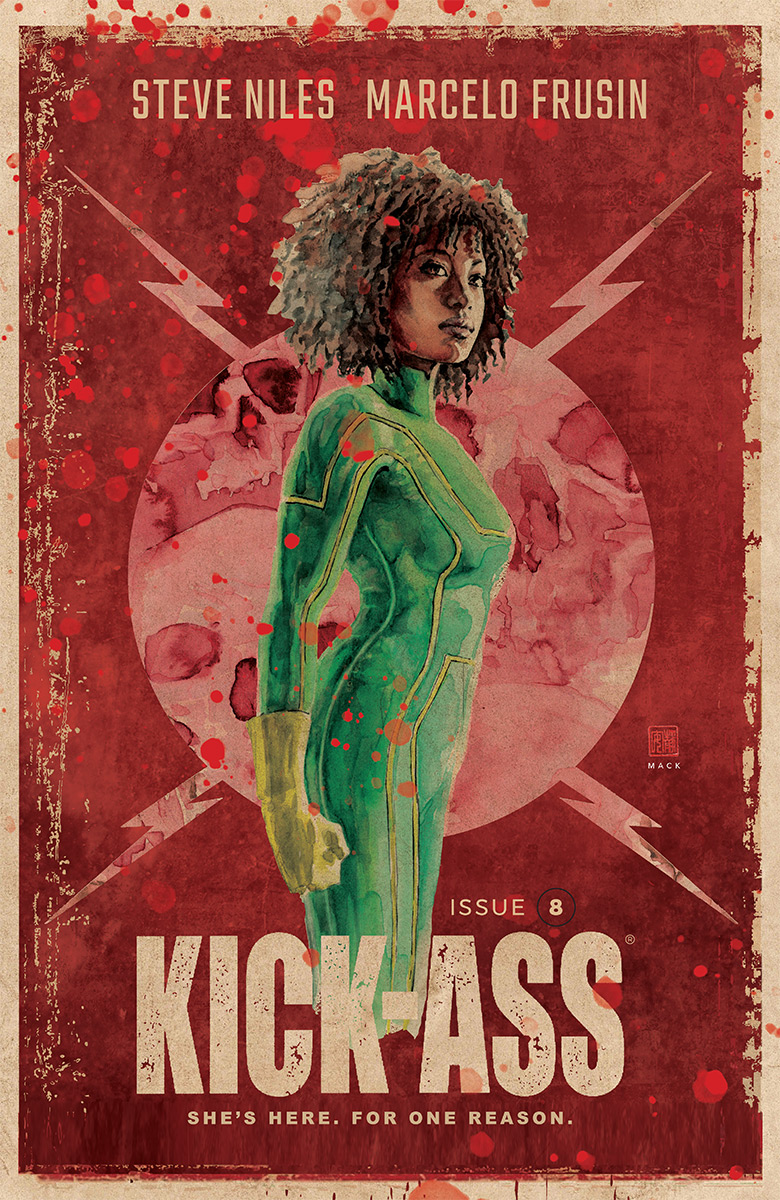